Kalimullah and Khairy: Don't they have any shame?

Through company, Efficient E-Solutions Sdn Bhd, Kalimullah secured a contract from Inland Revenue Board and plowed the profit back into an online news portal The Malaysian Insider to attack Dato Seri Najib.

Kalimullah denied the allegations. He claimed he was no more a Director of Efficient E-Solutions from June 21st, 2006, which holds 20% of VPI International that allegedly secured the contract.

He went on to claim he never secured Government contracts all his life. That's a laugh.

His partner and protege, Khairy Jamaluddin call for an open tender on the RM43 billion KL MRT project. He demanded it should not be based on any direct negotiation with Gamuda-MMC. What a hipocrit?

Don't both of them have any shame?

In construction, project by project business or supply business, contracts is the revenue for the company. For this posting, the meaning should be expanded to mean anything Government had awarded.

In the case of Kalimullah, the fact that he managed to secure the position of Editor in Chief of New Straits Times and the perks and influence that comes with it, he benefited from the Government of the day.

Otherwise, how would someone who was never reached Editor level of any newspaper and deemed a security threat secured such a high post?

When he was the inner circle of Pak Lah's weak administration, he was a shareholders of ECM Libra. For most, they can only remember the debacle behind the acquisition of Government controlled, Avenue Capital which is later called Avenue Asset.

Let's go back a bit.

They then met up with Kalimullah and tookover a former subsidiary of Bank Bumiputera, Bumiputera Securities. That time, Bank Bumi was being dismantled and Pak Lah gave Bumi Securities to Libra and became ECM Libra.

The Berhad end name came when they took the listing status of South Peninsular Berhad via backdoor listing. That made Tan Sri Azman Hashim a shareholder of ECM Libra.

IRB and The Malaysian Insiders

Kalimullah claimed he was no more Company Directorship but was not shareholder of VPI International.

However, documents here revealed that he remained as shareholder and the contracts with IRB was for a FIVE year period - from 26 September 2005 till 25 September 2010.

Blogger of blog Jejak Pujangga, Mohamad Asyraf, who was 17 years as reporter with NST and was with Kalimullah, said it is futile for Kalimullah to deny. Who doesn't know that his associates', Brendan Pereira dan Jahabar Sadiq operated Malaysian Insider. 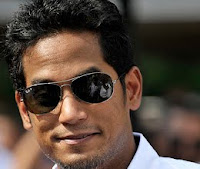 From one liar, we go to Kalimullah's protege whose doing a transition to lying via the hypocratic route.

Who is he to talk against direct nego when during his father in law's premiership, he and Kalimullah killed the Naza versus Syed Mokhtar bid for DRB?

They favoured Naza and Kalimullah made that infamour NST frontpage headline "And the winner is ..."

It is an open secret that Khairy was regularly consulted upon to advise or a less politically correct but more accurate and real description, decide for the slumbering and lazy Prime Minister Tun Dol.

He can deny but nobody would ever believe his denial that every Harry, Dick and Pussy cronies benefited from direct negotiation without open tender with his interference. Just do not challenge us to uncover back old war stories. Try JKR for a start.

Why is Khairy making such remarks? Let me not bush about. Is he declaring war on the Prime Minister?

If not, why would Tun Dol pressured Hishamuddin to instruct those aspiring for Naib Ketua Pemuda to withdraw and gave free passage to Khairy? Shouldn't that post be tendered out, which I mean contested democratically?

Everyone knows that he bought the votes with contracts. As a much despised arrogant person he is, Khairy's has no other way to gain loyalty then through money.

Every time, he manage to pull a chap into his fold, his famous words are, "There is more from where it came from."

Brick, pls remember the phrase 'Liberal Malays' who behaved like chameleons which changed colours to suit their own personal agenda. Never trust these people. KJ and Kali has done exceptionally well to put their men to fulfil their long term political ambitions.

Shame is not the priority here.
Money is what we Malaysians respect.
So it is the society's fault that we have so much corruption!

We must watch him closely.

Hello Voice,
What amazed me is why are those PR Bloggers like AK 47,Tukar Tiub, Haris, KTEMOC, M2Day are not exposing these KJ & his bandits daylight robbery. All they do is bashing Tun M & PERKASA & all the blaming on Melayu.
My hats off to u bro

Its too simplistic to blame society for all the ills in the world!

Society is not to be faulted for the Weakness of the Individual...Its the individual that should exercise restraint for the sake of the Society!

That is what Religion and Religious Leaders in Society aim to do....Ask that individual do good for the sake of Religion and Society for Society and religion is intertwined...

Nothing will harm them for they are truly Priviledged...
They are the culprits and not "Society"

You know what is shameful. The take over of KL Monorail by the government aka the 4th floor boys during Dollah Bodowi days. Hope you have the time to ask around as many was victimized. The role of so many including the office of Noh Yackop aka mamak sial, Bina Fikir, PwC the so-called righteous audit firm, Scomi and of course the 4th Floor boys. The sale of the buses and so forth.
Its worth looking into bro ...

Love your name...Sooo Appropriate Though!

AK47 is an UMNO Member and Blogger who sees KJ as the only one willing to speak up against Perkasa.
The rest of the bloggers you mentioned wish very much for KJ and Bandits to continue to bring disrepute and implosion to UMNO and its supporters...

These are Kalimullah's Companies. Wanna bet any of these company do not get anything from Government?

the word and feel of shame does not exist in their dictionary and life.

Actually the Apes are much more respectable then these two.