More under the peak of the iceberg 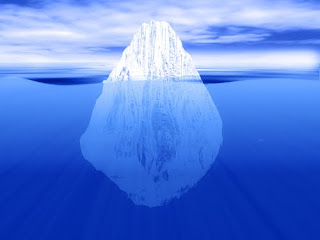 My journo-blogger friend, Lenggong Valley described my last two days revelation as "peak of the iceberg."

By the common methodology used in Malaysia by analysts and punters, the revelation can lead to more revelation on more rotten things hidden in the "state of Denmark" for Najib to address immediately.

Failing a major cabinet reshuffle and major reappointments, Najib will be viewed to conform to new growing negative perceptions.

Unless Najib is brave enough to be done with party protocol and be decisive and firm on issues relating with good governance, eradicating corruption, and addressing incompetence at the highest level of Government, his premiership will be seen to be waning.

Having said that, it leads us to Tan Sri Zarinah Anwar, the Securities Commission (SC) Chairperson who has been keeping her husband out of public eye for many years.

Her response to the allegations of abuse and intimidation on journalist is far from satisfactory. Zarinah only denied SC were "bullies", which is repeating an earlier lie. [Read inside The Malay Mail and Bernama.]

If so, why is The Star reporter BK Siddhu seeking judicial review over SC notice.

Then she bullshit about requiring additional power to go after Directors. It sounds as though she is creating an excuse for failing to go after the three missing Taiwanese and Tun Musa Hitam and the whole Sime Darby board. Is that not enough legal provisions under the law to go after Directors breaching their fudiciary duties?

Zarinah went on to talk of rise in corporate misconduct exposure as a result of enhanced vigilance. Hope she is not claiming all the credit to SC only because bloggers enhanced vigilance will improve SC's performance by pinning also the SC Chairperson.

It is quite noticable she spoke from her perspective as an enforcement agency without taking stock of the points about her going after the messenger. She did not bother to answer allegation against her "Mrs."

The SC Chairperson selected by the triumvirate of Tun Dol, Khairy and Tan Sri Nor Mohamad Yakcop is inspiring me to reveal more hidden under the iceberg.

From day one this blogger took up this issue, the suspicion was that SC was not going after the real culprit.

After taking in good faith the denial by a commentator claiming to be "Dato Ishak Ismail", the alleged culprit SC should be going can be shortlisted to the missing John Hwang, the Taiwanese Managing Director and his two other Taiwanese partners.

Why was SC was too quick to claim they can't locate them? Shouldn't SC be saying they are still trying to trace them?

Market talk is they can be located. For some strange reason, SC was trying to pin down Ishak Ismail for insider dealing.

That is the reason for the harrasment by SC interrogators on journalits were to get their notes, handphones, and to force the revelation of their sources in an article about Ishak Ismail's dealing.

By doing a quick prosecution on Ishak Ismail for insiders trading, attention can be diverted and pressure on SC to deliver the Taiwanese culprits lessen. Whenever Kenmark is mentioned, they will talk of insider trading and not of the Taiwanese non submission of accounts, disappearance and probably, absconding Company's money.

Other than the fact they have obtained injunction to freeze Ishak's money, why the obsession to go after Ishak? Is SC attempting to coverup the Taiwanese?

These are just additional questions: Let's recap questions that she has yet to answer:

How about answering these allegations and not make the list of unanswered questions longer? There is many more coming next week.

Voice/Brick, I resent your statement: "she follows her natural gender instinct to turn tantrum and accuse everybody of having an agenda". PLs do not make biased generalised remarks like this.
That said, I enjoy reading your investigations. Food for thots.
Rgds, Female Leader

Voicey,the SC is like the MACC.Instead of solving problem cases,the SC create more problem for itself.Even though your company does qualify,you can get it listed by paying the people in SC.A good example is the listing of TAT SANG BHD from Johor.In the first year of listing the company announced heavy losses when the prospectus before listing indicate that the company will be profitable.This is PURE CHEATING by the SC in collusion with the directors of the company.

IRIS . . . Do you remember Zarinah? Azizan, you know who is J Singh? Lets have a drink at Mid Valley, Azizan. Btw, what ever happened to Kris Azman ? And why is it Zarinah, you want it hushed up, that the MACC have previously interviewed you on your conduct and that of Mr Kris Azman? Oh, Zarinah what happend to the case of Dato C K Weng (Ng Yen Yen's new best friend) ? Also, Zarinah when Chua Ma Yu paid a fine last year for insider trading why didnt your office send out a notice but merely hide it on SC website? Coz of Azizan, rite? KAUR is Queen

I expect that response.

You did what every other female is suppose to do. Accordingly I apologise.

That statement is what I describe as a TST statement. Meaning Tahu Sama Tahu.

Only those makan cili rasa pedas. I take you didn't taste anything.

Everytime yours truly and others raise issues such as the one you are focusing on now, it should have dawned on you that if what you said is true these people should have been immediately replaced the moment a truly capable PM comes in!

It seems to me that what we have here is a case of "Business as Usual". There isn't going to be any changes as far as the Backroom dealings go.

I suggest listening to Simon and Garfunkle's "Homeward Bound" is more appropriate......for those lucky enough to find a new home.