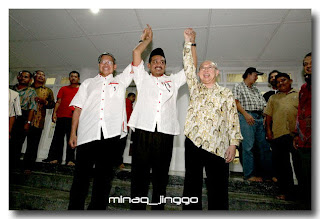 Congratulations to BN for the double win in Galas and Batu Sepi. Their second consecutive win against PAS must have been a sweet one.

However let's not be lost in the jubilation and self adoration from the win. Respect our opponent. When we lost respect for our opponent, that would lull us into a false sense of supremacy. Remember Ijok 2007 and what happened in 2008?

Having involved in the Galas by-election via the Galas untuk BN blog, I had no plan to write much in this blog. As the campaign progressed, my earlier posting entitled Issues versus Machinery remain relevant and no subsequent posting was necessary.

The win by Barisan Nasional by 1,000 odd votes was about PAS off-form machinery unable to match BN's coterie of issues.

With so many issues in BN's favour, it was considered a dismal win. Deputy Prime Minister, Tan Sri Muhyiddin was right to caution BN from being overzealous from the win. There is still much room to improve on.

Many believed that BN won due to the mistake by Kelantan Menteri Besar, Tuan Guru Dato Nik Aziz Nik Mat to offer money to three orang Asli youngsters after the syahadah to embrace Islam in the broad view of cameras, video cameras, and handphone camera.

It was equated to the crucifixed-tengkolok incident on Tengku Razaleigh in the 1990 general election.

While the tengkolok saved BN then from losing to a Semangat 46-led pact with DAP and PAS, the Nik Aziz 'rasuah' incident only shifted Malay votes by 4% and majority of Malay voters still favoured PAS.

If Khairy's boys jumped to praise Khairy for daring to claim credit for criticising Nik Aziz, it hardly made any dent. Who is to believe a corrupt accusing Nik Aziz as corrupt? Read here in Utusan Malaysia.

It is the Gelombang Merah ground campaign effort by Wanita UMNO that should be credited for some ground gain. They managed to 'neutralise' some of PAS strongholds like Sungai Terah.

MCA was effective to swing Chinese votes swing back.

Orang Asli had returned to the old 2004 level of 90% support for BN. See Malaysia Aktif here.

Another positive note is the saloran 3 and 4 for youth votes heavily favoured BN.

PAS poor performance was quite surprising since they had entrenched themselves in Galas for 3 months ahead of the polling date. The Dewan Muslimah PAS had actively pursued house-to-house ahead of the official campaign period.

It must have been frustating to have their long preparation hampered by wrong choice of candidate, internal squabble arising, and disagreement between PAS's local and outside machinery.

That may explain the incident where one Puteri UMNO from Kuala Krai got the receiving end of their stick on polling day.

Some water to douse BN's fiery spirit from the double win. If PAS's candidate had been Ustaz Lah or Hussein Embong, things maybe different.

Why didn't BN win with a better and wider majority?

BN won on the shift in Chinese votes and return of the full backing of the orang Asli. It shows it had not caught the imagination of the Malay voters of Gua Musang.

Are Malays not convinced of the issues against PAS? If so, it means there is more than just campaign issues that need to be addressed.

One problem with the campaign lies with the election machinery. There have been much improvement but the level of dedication still leaves much to be desired.

Back in 2004, I visited the Kepala Batas campaign headquarter. Pak Lah was in high spirit. People loved him then. I loved him too then. He was sure to win Kepala Batas. But they worked throughout the night as though they are going to lose.

That kind of energy and dedication is missing in UMNO today. Sabotage, jealousy and internal bickering still prevailed at Gua Musang despite the reminder from Dato Seri Najib at PAU 2010 to rid itself of such bad habit.

The Gua Musang Youth Chief, Bazlan Baharuddin had wanted or more precisely demanded the candidacy. He had readied his Bazlan Security office (talk about being conspicous) as operation room.

When Aziz was picked, he brought down all the flags and closed up the operation room. He hardly involved himself with the division's preparation for election and was seen only trailing Khairy's campaign trial.

Pemuda Gua Musang was hardly involved in the campaign. One do not see Pemuda putting up flags, banners and posters. It was paid youngsters and elder Wanita that was passing out Utusan and pamphlet to the passing traffic.

Too few Pemuda was seen at poll station as perisik undi. With Pemuda in a state of penile dysfunctionality, much can be said of Puteri.

If this is the kind of happening everywhere, do UMNO still need the Pemuda and Puteri wing?

galas for BN, change to kelantan for BN, BN should start their machinery fast PAS already start clean their command centre (markas) after few years left it unclean they expect GE is near.

for Umno Youth, just kick out KJ or just send him outstation, thier army just want project, project to make them super rich

why are you trying hard to tell people that you were also participating in blog campaign for BN when your 'nom de plume' site was stagnant throughout?

Is it important I declare to you?

I don't work for nobody and I reveal what I wish to reveal and tell.

If you could not fathom why, tough luck. It is not important to make you understand.