This scene of Pemuda members chanting rasuah! rasuah! rasuah! on the newly elected Ketua Pemuda UMNO will long be remembered as the darkest moment of the Pergerakan Pemuda UMNO. And, this is the image that represent the contemporary Pemuda UMNO Malaysia, an important wing of any political organisation.

Unless something drastic is done, this ghost will continue to haunt and could lead to the demise of UMNO in the long term. As it is, the impact and attitude of Pemuda led by an arrogant, corrupt and destructive leader is already felt at the gassroot.

The Galas by-election saw that arrogance and stubborness translate to the local Pemuda defiant to the Divisional leadership and unwilling to operate and lend a hand to the election machinery.

It is time UMNO nip the problem in the bud and this piece of information should help. If they are serious about reforming the party, the ball now is in Najib and Muhyiddin court. They should investigate and take necessary action.

In July 2010, my friend Syed Akbar Ali wrote a blog posting entitled Time for Khairy has to go. 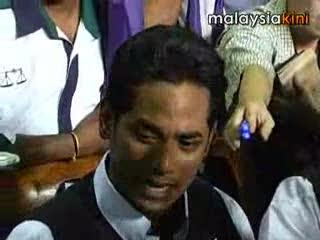 The presence of Khairy in the UMNO political scene, coming with the rise of Tun Abdullah Ahmad Badawi has caused much damage to UMNO politically, Malays economically, and youth socially.

His followers maybe making grandeur claims and singing praises of Khairy but they cannot single out any of Khairy's contribution, when asked upon.

The youth wing, be it Pemuda or Puteri, is rising to the level of incompetence. When Tan Sri Tengku Rithauddin call to close-up Pemuda and Puteri, he is saying the wings are irrelevent.

An irrelevent youth wings spells disaster for the party in the long term.

The underlying reason for the malaise in Pemuda is Khairy Jamaluddin.

His appearance in the corridor of power, with the rise of Tun Abdullah Ahmad Badawi in Oct 2003, has caused much damage to the party and country that one source close to Najib did say sometime back that it will take him 10 years to repair.

Bloggers have expressed their view on the need to rid off Khairy to no less than the Prime Minister, Dato Seri Najib Tun Abdul Razak and Deputy Prime Minister, Tan Sri Muhyiddin Yassin.

The exact words is "heads must roll" before the people, irrespective of race, are willing to give UMNO a chance again. Until then voters will remain irrational in the their judgement and decision becasue the trust factor is no more there.

Bloggers, media, and supporters have done their part to expose the weakness of Pakatan Rakyat and bring back the people to the middle. UMNO must do their part to show they are serious and have changed to get them to their side.

Again, "heads must roll" before anything will significantly happen. Let us not be fooled by the double win to believe that confidence is back. Galas and Batu Sapi are also won on the back of problems within the opposition. 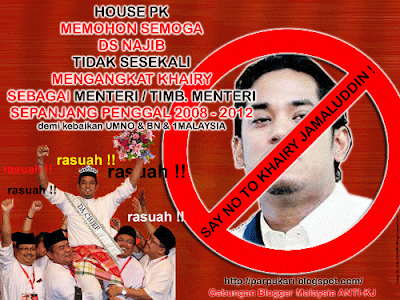 Now to roll the head.

Prior to winning the Ketua Pemuda post, Khairy's name surfaced for allegations of money politics. There were other long list of names. I have a copy of the list but it will take a while to dig up through the heaps of documents.

Khairy was let go with only a warning by UMNO's disciplinary committee but he was allowed to continue to run. Dato Ali Rastam and many others were not so lucky. They were disqualified from running for offices.

However, strangely there was no stern action from the disciplinary committee. No membership stripped or anyone expelled. Their positions in Government remain. Many from within UMNO and outside viewed the inaction as a signal that UMNO was onloy rhetorical and not serious in combating money politics.

After much talk of combating money politics, what happened to the disciplinary committee? Why were they giving excuses after excuses?

Many had figured it right the first time.

They speculated that Abdullah Badawi wanted to save Khairy and he was willing to go back on his public statements on money politics. They were right but they were still missing some information.

On the night before the disciplinary committee met the next day, Abdullah had called one key member of the committee to ask specifically about Khairy's case.

He told Abdullah that Khairy's case was a no hoper. Not only that, there were other cases with witnesses and video evidence of him threatening and harrassing youth delegates.

Abdullah asked how to save Khairy's skin. He replied that it is difficult especially when there were a list of cases at their disposal. If Khairy is allowed free, then many will scream unfair.

To solve that, Abdullah suggested that "lepaskan semua." Meaning none will be subjected to any stern action. A suggestion from party president and Prime Minister, which has still few months to go, is as good as directive.

Now that Abdullah is gone and this secret is out, action must be taken. UMNO must investigate this.

This blogger knows who but Najib and Muhyiddin must do their part. They must meet up privately with all members of the discplinary committee. Do it ala Tun Dr Mahathir on Anwar's first sodomy.

With the evidence brought forward and proper action taken, hopefully voters could be convinced that UMNO is serious about combatting money politics. Without any heads rolling off the guillotine, don't be too sure voters will give it to UMNO.

If they are not willing to give to Pakatan Rakyat, they might not come out to vote or spoil the votes just like in 2008. Independents running may benefit as the garbage can for protest votes.

If the head rolling on the ground is Khairy's, rest assure that votes will definately roll back in. The major stumbling block to the undecided new young voters is gone.

voicey,I am sure as an MBA Holder,you know that the GOVT of MALAYSIA IS CURRENTLY BANKRUPT.Why the govt is BANKRUPT ? Because we have a govt rule by people from Umno and BN who are "KAKI RASUAH". Tiap taip tahun dalam perhimpunan agung,Umno kata ia akan menolong kaum bumiputra melayu,tetapi tiap tiap tahun kecuali Umnoputra,kaum bumiputra melayu yang lain semakin MISKIN.

U get my vote next GE if Khairy's out of the picture. Until then, well..

i hereby support that this matter to be reopened! this is something the grassroot demand to know & more than that, reprimand the doer! he's the cause of uneasiness felt among the youth members & umno members who loath bribery...

I support the motion !.

GRRRR, all these , "Rampant corruption revealed in the Selangor State Assembly", "RM65mil to redo PM's house; but no money for staff" "'PM's private secretary accumulated RM200m wealth'" are at the expense of "Floods that swept the country do not show signs of recovery but the number of victims has now risen to 28.569 moved people from 25.000" and "floods in Kedah had damaged about 45453 hectares of padi crop, including 30052 hectare". Time for 3rd force to takeover. Panji hitam now calling for real JIHAD...Fissabillah!!

Besides Parpu's bestest friend here (KJ of course), don't forget to "revisit" his monkeys that hv been donating loads of money for keeping his Pemuda UMNO post (for now):

Until today I simply cannot forget the word RASUAH chanted by the pemuda UMNO after the result of the post of KP was announced.

From the best election result in 2004 to the worst result in 2008 because of the interference of KJ the son-in-law of Tun Abdulllah in Putrajaya.

openlah ...takut apa
coming from a khir toyo acolyte this suggestion may be greeted with howls of laughter and derision.

quote:
"If the head rolling on the ground is Khairy's, rest assure that votes will definately roll back in. The major stumbling block to the undecided new young voters is gone. "


it is obvious you dont have your finger on the pulse of we young voters.

mukhriz? toyo? hah! they are no better! just as corrupt and even more poyo!

These corruptors will never be punished on earth. They will only be punished in hell. They no longer fear Allah for Allah has blinded their heart and soul. They only see MONEY as their God. So be it......

Khir Toyo and Mukhriz are not public misfit and did not sabotage the party like saboeur to teh party like KJ.

How tarnish he is, Khir Toyo had contributed to Selangor and left with a coffer of RM1.6 billion which is now gone due to Khalid Ibrrahim's mismagament.

All this because KJ is power hungry and believe in grabbing power by any means.

When given power, he is like a monkey who does not know how to use and make it beneficial to teh party.

Instrad he sabotage it!

It seems that the young generation is warming to KJ. In Galas it was very clear the UMNO Youth Machinery was well oiled and they did win all the saluran 3 and greater.

In all probability KJ may be given a Minister position in the near future. I wonder how the author of this blog will react if it were to happen

To George Choo.........melayu miskin is not because of the government but because the chinese are taking everything and not sharing the cake. Malays also can have a car accessory shop and ahardware shop but can never compete with the chinese. This is due to the fact that only chinese brothers get specail price fromsupplier. So at the end of the day, the malay will die coz they cannot sell thier goods as cheap as the chinese shop. Get it Mr Chooooooo........don't lie to us malay. We know what u are doing.........

Semua rasuah. I was contesting for "ketua pemuda bahagian post" but lost by a small margin. All three candidates are involved in rasuah la. All gave money for nomination. So why only one was called a rasuah I pun tak tau. Pls reopen khairy's money politik file....if its opened that all will kena. Anak Mahathir, that jawa guy from selangor (biggest giver for nomination), and si kitol.

Oh ya, remember the speech "melayu mudah lupa". Early 2000, Tun M was hated by malays until he had to resign or else UMNO and BN will loss. Now every malay love Tun M. Tun really knows the malay i.e melayu mudah lupa.