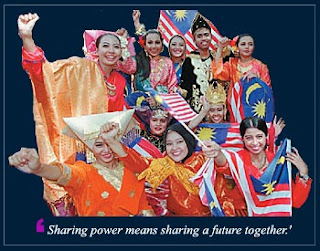 In the last posting, Averting a False Sense of Confidence, this blogger briefly touched on the idea of direct membership into Barisan Nasional. It is not the first time this idea was mooted in this and other blogs.

The reason being that to most Malaysian, the BN idea is still a more formidable preposition than the hodgepodge and cocophony called Pakatan Rakyat. To those who prefer not to be associated to any specific political party in BN, this serve to retain that support for BN.

Hopefully the direct members in BN could be that important glue between the various component parties, voice that keep them on their toes, and who knows what will evolve beyond that.

The report in The Star today below:

KUALA LUMPUR: Individuals friendly to the Barisan Nasional can now join the coalition as an associate member following a supreme council decision to amend the constitution to allow direct membership.

The coalition has also opened its doors to associations and non-governmental organisations to become “friends of Barisan” by becoming its affiliate members.

Under the existing practice, one must first be a member of a component party in the coalition to qualify as a Barisan member.

Prime Minister and Barisan chairman Datuk Seri Najib Tun Razak said the decision reflected the leaders’ efforts to make the coalition inclusive and open to all who shared and subscribed to Barisan’s spirit, concept and principles.

However, the direct members will not have the same rights and privileges as members of the Barisan component parties, he said after chairing the council meeting yesterday.

“The council will determine the rights and privileges of those who become associate members,” he said.

Political observers also recalled that Tun Dr Mahathir Mohamad allowed two candidates without a party to stand under the Barisan banner in the 1990s (both won – Datuk Billy Abit Joo in Hulu Rejang and Datuk Joseph Salang in Julau).

Najib said all decisions relating to direct membership into the Barisan would be made by the supreme council as a way to prevent anyone with ulterior motives from joining the coalition.

“This is because we need to consider the views of other component members for our decision to be unanimous in nature,” he said, adding that direct membership would take effect after the Barisan headquarters notified the Registrar of Society of the amendment.

Najib said those who left any Barisan party after the amendment was made could not return to the fold as an associate member.

He said those from the opposition parties could apply but the supreme council would have the final say on whether or not to accept them.

Najib said the constitutional amendment would also see the setting up of a Barisan Friends Club, to allow interested people to become friends of the coalition.

He added that a Kelab Rakan Muda BN would also be set up for youths who are not yet registered as voters and aged 18 to 21 as a platform to show their support towards the coalition.

He said details on direct membership would be announced at the Barisan convention next weekend.

MCA was quite aware that there are many grouses against the Chinese component parties indifferent attutude to get anything going to woe back the Chinese voters and their emulation of DAP's chauvanistic inclination.

It is as if, he realised Chinese voters are not voting BN because of MCA's attitude and BN 'friends' can be an option to replace MCA, and Gerakan candidacy with other pro-BN Chinese candidates. Wee Ka Siong is an interesting preposition.

As Najib said, it is not that BN has never put up a non component party member candidate.

For Chua that contantly talk of thinking of the box, don't you realised he has a boxed mind on this issue? He must have longed being deprived from that room on 14th floor Hotel Katarina Batu Pahat.

Ah well Gerakan. With a wimp as President, tutup kedai la. Koh Tsu Koon was Keng Yaik's choice, so no a need for being disapponted, Tun Lim.

This is just another 916-type hype to retain the young voters segement, probably for the non-Malays, for Pakatan Rakyat. Can we say it is PR's version of 'friends' or direct membership?

Lawyer-activist-murtadist and another one, dramatic Harris Ibrahim already claiming the Third Force turf. This is immediately after failing to push his prefered candidate and another murtadist, Dato Zaid Ibrahim for PKR Deputy President.

Before Harris jump and bang me in his blog, the term murtadist is my poorly conceived term for those Islam liberal or maybe not even Islam, who self-interpret Article 11 and even the Constitution as they see to fit their needs and idealism.

They basically work to support Azalian Jailani aka Lina Joy route to murtad as right and the court, from session to federal court, was wrong.

These minority fuckers think they are the only people existing in this country.

Frankly the Third Force will not be more than the same PR pact unless it exist within BN or UMNO specifically. This became fodder for conspiracy theory.

One loud but novice political commentator recently claimed Raja Petra is funded by Tengku Razaleigh. Some say and the pro Azmin/Anwar PKR now say Zaid Ibrahim is an UMNO stooge.

The immediate association will be RPK is funded by Ku LI via Zaid. This mean Ku Li is in collaboration with RPK, Harris and Lim Kit Siang and perhaps leading the Third Force hands from within UMNO.

Sometimes this blogger hopes this comentator knows what and how to accomnplish his existing mission than indulge in areas he only know or touch barely the surface.

Does he think Najib is a walking numbnuts to not reinforce the next candidate list to ensure no such threat repeat itself?

Pak Lah did not resign weeks after he swear in. Bringing him down and up Najib was not by some grand design concocted behind some curtains but from sheer hard and relentless pursuit.

For one, Ku Li is not a believer in intrigue. He ahs said he will die in UMNO even if it is claimed to be one big bowel of shit. It only shows he is committed to UMNO.

The Galas by-election will attest that. He concurred with this blogger that we could have done better, How does that say he conspired the outcome?

This can be said of the Third Force. It is a Pakatan scheme to retain teh young new voters. And it is ahgainst BN and not as a decider or clinger in a cliff hanger. Finally, it involves an already existing and ongoing collaborations.

On BN's version of Third Force, maybe Najib did hear us or maybe he did not, it sure feels good that ones idea becomes a reality. It is as if Tok Jib is reading what we bloggers wrote, said and suggest.

This blogger will personally vouch he is a good and accomodating listener. In personal encounters with many leaders, good leaders listen more than talking.

It feels good and appreciated. More satisfying than being alleged as a blog paid by Khir Toyo (not that I do not know him personally) by some low IQ, immature, young punk KJ cybertroopers trying to play the label game.

One loud but novice political commentator recently claimed Raja Petra is funded by Tengku Razaleigh. Some say and the pro Azmin/Anwar PKR now say Zaid Ibrahim is an UMNO stooge.

The immediate association will be RPK is funded by Ku LI via Zaid. This mean Ku Li is in collaboration with RPK, Harris and Lim Kit Siang and perhaps leading the Third Force hands from within UMNO.

I am mentioning and disputing it because it is already much talked about and I dont believe it.

Ku Li don't conspire and intrigue. He play by the way the rule is supposed to be played.

'These minority fuckers think they are the only people existing in this country.'

this really make my day, LOL...

good one, really...hope all these fuckers read this

2) Congratulations En Rashid Yusof on your appointment as group editor of New Straits Times. Dato Syed Nadzri has been ineffective thus the non-renewal of his contract. Nuraina Samad did not live up to expectation therefore NSTP supremo Dato Zainul Ariffin Isa did not push for her promotion as planned under the succession strategy. The Zainul Ariffin-Rashid Yusof combination should make Paklah/Khairy Jamaluddin proud because it’s a reminiscent of the Kalimullah Hassan/Brendan Perera team. Tun Dr Mahathir disliked Paklah/Kali/Brendan. Will TDM support this Najib/Zainul/Rashid team? It’s an open secret in Umno that Zainul Ariffin and Rashid Yusof team are advising KJ. Maybe BigDog is afterall right about Rashid Yusof’s long-term role to ‘resuscitate’ KJ but this time through NSTP. Is this a sign Najib is no longer bothered with TDM being a ‘pain in the butt’ just like what Paklah felt about the latter previously. Congratulations KJ, you have won. TDM and Mukhriz, anda kalah! (Komen dalam ANOTHER BRICK - Nov 19)

Don't have the fact like you do to be cocksure.

Sometimes we have to compliment and thank where it is due.

Our leaders need to know where they go wrong and where they did right.