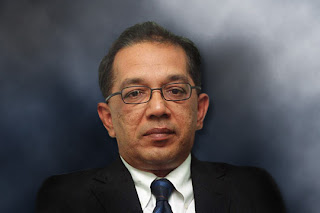 Our posting, "GO or no GO, Zarinah and SC under scrutiny" attracted Raja Petra's attention and he gave us a link.

For those newcomers in blogging i.e. post 2008 bloggers, something important to learn. There is no permanent "enemy" or permanent "friend"in the blogosphere. It all depend on the issues. Yesterday's "enemy" could be a "friend" today.

Remember that we are moving the country forward. Again, we are moving it issues by issues. Off course, ignore those twisted and lying portals. They will eventually face the consequences.

Returning back to the issue, in that posting, we said Sime Darby may be facing the possibility of doing a GO together with the 30% shares vendors, Datuk Tham Ka Hon or known as Terry Tam, Tan Sri Wan Azmi, and GK Goh Ltd.

We raised the issue of SC Chairperson's husband, Dato Azizan Abdul Rahman purchased shares before the deal announcement. SC's response is that they will look at all E&O transaction in relation to the Sime deal.

Something is strange. Why is Dato Kalimullah's man in Singapore Straits Times, Leslie Lopez echoing us? Scary to have Kalimullah agree with us. It's looking rooting for some sleepy devil.

Below is Leslie's article:

The plot tickens and all the attention is on the SC. With the Chairman of the SC being married to the Chairman of E&O, who bought shares of E&O just before the takeover by Sime Darby, making things even more intriguing. It is time for SC's next move, and everybody is watching.

Central to the widening public debate is whether the state-controlled group should be compelled to make a mandatory general offer for the remainder of E&O shares, a deal which could cost an additional RM 2.6 billion.

E&O is a property concern with lucrative rights to carry out large reclamation works in the northern island of Penang.

Critics of the deal argue that Sime Darby’s purchase of the block from three groups, including Singapore’s GK Goh Holdings, was structured in a way to circumvent the country’s takeover code.

But proponents of the transaction insist that Sime Darby was merely opting for a more cautious approach to its investment in E&O, and that a general offer could being the offing in the coming months.

In any case, the deal is presenting the Securities Commission Malaysia (SC) with a prickly regulatory problem over whether it should force Sime Darby to make an immediate general offer in the interest of protecting the rights of minority shareholders

On a separate level, the brewing Sime Darby-E&O controversy has also put SC chairman, Tan Sri Zarinah Anwar, in a tight spot. That is because her husband, Dato Azizan Andul Rahman, who is also the E&O chairman, had raised his personal stake in the company just weeks before Sime Darby announced its proposed acquisition in E&O.

Ms Zarinah did not respond personally to queries posed by The Straits Times. But an SC spokesman said in a written response that the agency was “examining the circumstances surrounding the Sime Darby-E&O transactions for any Takeover Code implications, and will determine the action based on our findings”.

The spokesman added that the agency was “examining all transactions in the Sime Darby-E&O deal”.

In recent days, Sime Darby executives have dismissed suggestions that the company was acting in concert with the sellers of the E&O shares, a situation that would definitely trigger a general offer.

But critics of the deal are not convinced. They note that Sime Darby, which is still recovering from heavy losses sustained from its foray into the oil and gas sector, would be negligent to its own minority shareholders for entering into a huge amount of capital without having some form of control.

How the SC decided will be crucial. There is already speculation that other shareholders of E&O are considering legal action to force a general offer.”

Can we safely assume that Kalimullah is keen on a Mandatory General Offer?

Kalimullah's are friendly, if not have interest in Fox Comminication and FBC. After Tun Dol forced intop early retirement, Sime Darby kicked out Fox Communication for Public Relation work. FBC was recently kicked by the current administration.

Is there an element of revenge in play here?

Malaysian Insider (MI) seems to be against the Sime Darby-E&O deal. MI is a Kali-Brenden (formerly of Fox Communication.)

Also, analysts condemning Sime Darby could well be led by ECM Libra led by Kalimullah and Lim Kian Onn. Remember David Lim left them not long after the ECM Libra-Avenue merger was consumated.

By Kalimullah declaring his interest for a GO, how do one makeout Kalimullah getting out while his business associate, Azizan is left stuck with the purchased 100,000 shares in E&O?

Let's look at this possibility.

If Sime Darby and the vendors managed to be exempted from doing a GO, the new shareholding structure will be 30% Sime Darby, 12% from the three vendors, Kalimullah & Associates believed to be 20%, and floating shares the maximum is 38%.

Under the collaboration agreement, founder Terry Tham will remain at the helm for the next three years.

He thought Kalimullah was planning to do an asset strip. Since SP Setia pulled out and the block was not coming his way, Kalimullah may have tried to railroad the deal by leaking to the press and made it more costly.

This project require serious pumping of money and Sime Darby's financial strength could make the project undertaken on Penang island come through.

Why do we have this strange feeling that Sime Darby will lose control of E&O when the project cashflow is flowing nicely?

Bro, nothing strange abt the move. The objective is to make Najib looks bad and frankly speaking, Najib indeed has LOST control.

When will the Triad Big Dog, Rocky Bru and Voice (constantly meeting at Bangsar Shopping Centre to plot) stop conspiring against the Chairman of SC, Musa Hitam and Rais Yatim?

Be known that nothing will happen for Najib will not betray his close friends and aides especially when their wives are also close friends of Rosmah....

You have omitted to mention that while Datuk Azizan did purchase 100,000 shares of E&O prior to the annoucement, This was increase his existing holdings in the company to 4.5M.

There is also a consistent pattern of him regularly purchasing E&O shares (and declaring such) in similar amounts since 2009 and 2010. It could be that he just really likes the company.

While this may or may not have any bearing on the issue of insiders, it is still an important point to put into context.

Another note is that buying less than 33% of a listed company in order to "circumvent" the takeover code is not an uncommon practise and is far from illegal. Another recent transaction was Syed Mokhtar's purchase of Pos Malaysia.

You have omitted to mention that while Datuk Azizan did purchase 100,000 shares of E&O prior to the annoucement, This was increase his existing holdings in the company to 4.5M."


Obviously Azizan was planning for the big kill.

Get a big Malay owned company to buy E and O at inflated price.

This was premeditated robbery..