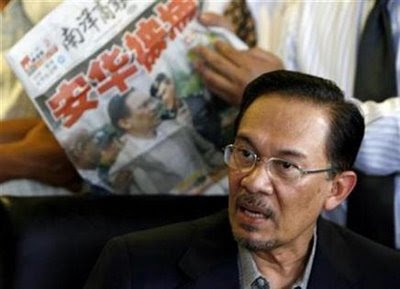 Lead counsel D. Paramalingam, who acted for businessman Low Thiam Hoe, told the court that he could not serve the subpoena on both of them.

Lawyer Andrew Chiew, who acted for the Hong Leong told High Court Judicial Commissioner Hadhariah Syed Ismail that he would file an application Thursday today to set aside the subpoena issued against both top figures.

The Free Malaysia Today report below:

A defendant in a non-payment of loans case wants to put the then finance minister and a prominent banker on the stand as part of his defence. 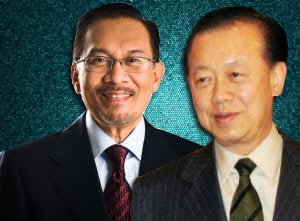 KUALA LUMPUR: The High Court has allowed an application to subpoenae Opposition Leader Anwar Ibrahim to be a defence witness in a civil suit over a deal involving RM445 million syndicated loan facility given in 1998.

The four individuals are being summoned in an attempt by lawyers of the defendant, businessman Low Thiam Hoe, to link Anwar – the then finance minister and deputy prime minister – to the loan and the subsequent failed acquisition.

However, lawyer for plaintiff Hong Leong Finance, Andrew Chiew, said he would be applying to the court to set aside the subpoenas for Anwar and Quek, saying that these witnesses were “unnecessary”.

Questioning the motive of the defence in bringing in these new witnesses and claiming that the defence was trying to “lead the court astray”, Chiew said: “One can only question the real motive of this; in the circumstances…how does that feature in any way, material or otherwise, to the defence’s case?”

“It is so obvious that my learned friend is trying to change the case…We do not know where exactly they are coming from. If I close my case, and they call these two persons, I don’t know what they’ll say; a multitude of things and I am not given the chance to call more witnesses,” Chiew said.

Chiew, however, agreed for Hamzah and Faiz, who was also said to be Anwar’s speech writer, to be called (as witnesses) as their names were repeatedly mentioned in the case.

Low’s lead counsel, D Paramalingam, argued that Anwar and Quek, along with Hamzah and Faiz, were needed as they form a vital part of the defence’s case.

“The person who actually instructed (the deal) was, namely, Anwar and there was a relationship there with Quek. These witnesses will form part of the evidence,” Paramalingam said.

He said that he had earlier this week failed to serve the subpoenas on Anwar, who is in Parliament, and Faiz, who is overseas.

Quek cannot be located, he said. However, he added that the notices will be served as soon as possible.

On March 19, the High Court judge Hadhariah Syed Ismail dismissed Low’s application to amend his defence statement to include Anwar as “the person behind the deal”.

In rejecting his application, Hadhariah said it was made at the “eleventh hour” and had come too late in the course of the trial.

Chiew argued today that the judge’s previous decision would make the subpoenas invalid, but Hadhariah said that it was premature to decide on this issue.

Six witnesses of the plaintiff had already taken the stand.

The loans were given to the parties in a bid to acquire financial institution Arus Murni Corporation Bhd (AMCB) which owns Kewangan Bersatu Bhd (KBB).

Each defendant was sued for over RM28 million plus interest for the non-repayment of the loans.

Today, the plaintiff’s witness Seow Lun Hoo was called. He was the president and CEO of Hong Leong Credit between 1997 and 1998.

Seow testified that he was introduced to Faiz in 1997 by Berita Harian editor-in-chief Ahmad Nazri Abdullah, who had informed him that Faiz was interested in acquiring AMCB, which was then known as Inchcape Timuran Bhd.

“Faiz asked for my assistance in this acquisition… I introduced Faiz to HLFB and HLF Capital Markets to structure and to finance the acquisition of shares and warrants in AMCB. Low and Mekuritek also participacted,” Seow said.

During examination-in-chief by Chiew, Seow said that the proposed acquisition of KBB by Hong Leong Finance had nothing to do with the syndicated loans.

“HLFB was prepared to acquire KBB due to Bank Negara Malaysia’s initiative to encourage financial institutions to merge in the late 1997. In connection with this, HLFB had conditionally agreed to consider acquiring AMCB’s shares in KBB subject to a due diligence exercise,” he said.

Seow later said that the deal did not go through as HLFB never agreed to the value of RM350 million which was a value indicated by AMCB.

During cross-examination, Paramalingam said: “I put it to you that the plaintiff did not acquire or refused to acquire KBB because of the economic downturn at the time, and the value of KBB had gone up.”

But Seow maintained that HLFB “was unable to agree with AMCB on the valuation of the KBB”.

He also said that financial licences for financial institutions such as KBB are given out by the finance minister, who was Anwar at the time.

When asked about the loan process, including whether credit assessments were done before the loans were sanctioned, Seow said that he could not answer questions involving actual “operational matters” as they were beyond his job scope.

He denied a suggestion by Paramalingam that there no assessments were done on Low before the loans were given.

Seow also denied a suggestion that it was Quek who instructed him to approve the syndicated loans.

When questioned by defence lawyer Devanandan S Subramaniam, Seow admitted that he sat on a committee that would go through credit assessments and he would be aware of it.

The case will continue tomorrow, where Hamzah and Low will be called.

Bro.
There is nothing the defendant can get from Anwar and Quek.The story is vary simple

Arus Murni need the financing to buy the Finance Co.They ask Hong Leong Credit to syndicate the Loan.$420m was raise.At that time all the director of Arus Murni were thinking of becoming super rich.They forget if anything happen to the loan they sign the guarantee,and they have to pay.

If you go to the high court or appeal court and Federal court and sit inside the court,almost 50% of the case regarding the Bank or Finance co suing the borrower and guarantor.The borrower and the guantrantor will come up will all the grandmother story try to find the excuse not to pay the bank.I remember in one of the sitting in Federal court,the defendant lawyer try to argue in front of three panel of judges.One of them was Tun Zaki.He ask the defendant lawyer vary simple question.Did your client borrow the money from the bank.The lawyer reply yes.Then he said he have to pay.I was a practicing lawyer before and I know how banking system work.

I think the case is nor so bad.They borrow $420m,They have paid $392m.The bank only sue him for $28m.I am sure he have the money stack somewhere.Be gentlemen.

Why are you so desperately trying to defend Anwar?

He is no angel!

Leave it to the lawyers and the court.