Happy Birthday ... "You Are Special" 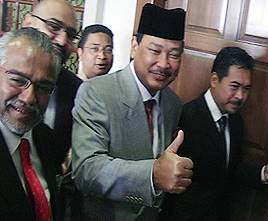 There was a Birthday Day celebration yesterday evening at the Sime Darby Convention Centre.

The people working at the convention centre were saying the IGP, Tan Sri Ismail was there as honoured guest. Most of the attendee looked mostly police.

Interestingly, the event was dubbed as Happy Birthday "You Are Special" Dato Ramli Yusof.

Perhaps, one can expect the Singaporean MAS lawyer, Rosli Dahalan to be there. He was the one who insist that the police reopen the investigation on Tajuddin that was already closed twice.

Rosli is Ramli's friend at UIA and accomplice in the high level frame-up that involved Tun Abdullah Ahmad Badawi, the devious former Bernama Chairman Dato Zaini and all the MAS honchos out to blame Tajuddin with the laughable claim that Tajuddin Ramli lost RM8 billion througout his tenure at MAS.

The Malaysian Insider have stopped accusing Tajuddin with RM8 billion but claimed Tajuddin had piled RM9.5 billion debt. Go ahead, find me a debtless airline in the world.

Why are they blaming it on Tajuddin?

So that Air Asia can cannibalise MAS. And they are doing it through the CCF. So happen yesterday MAS registered a loss of RM2.5 billion and that will quickened the cannibalisation of MAS by Air Asia. Talk is Air Asia is showing signs of trouble the world I see.

The renewed attack on Tajuddin is to help Tony F cannibalise MAS too. And they are trying to draw the attention away from the numbnuts way the turnaround of MAS is being handled.

You can read all about it in great details in ths blog's past postings.

Why is the event was dubbed as Happy Birthday "You Are Special" Dato Ramli Yusof.

This blog had reproduced reports of his assets and he must be a genius to be "playing shares" and never had a bad year in his whole life.

He has got quite a few houses and properties for someone who started in the police force from Pasir Mas Kelantan on a few hundred salary.

So he must be special to someone for a reason.

To his family, he has provided them well. Off course, any husband and father is special to his wife and family.

But that is not interesting, there must be more than that to any intrigue. Wonder who paid for his birthday bash yesterday.

What is so special of a former Director of Commercial Crime Investigation Department (CCID), who is supposed to investigate and catch on bad corporate and business people committing crimes, CBT and many other heinous crime of stealing from others or that belonging to others or the public?

One thing special is that Ramli Yusof seemed to have the sympathy and support of pro-PKR and pro-oppositions bloggers and online writers.

They think he is a good guy and the former IGP is the bad guy. Tan Sri Musa Hasan must be deceiving everyone driving in a modest care and doing his own errand like normal human being.

Tuan perhaps you might want to investigate Dato Ramli's involvement in Mas Kiara condominiums in Pinggiran Taman Tun Dr Ismail.Find out how Melayu buyers get cheated out of their houses after 15years.The case is going on in the High Court NCVC3.Check it out and help 60 house buyers!Salam.

You are absolutely right on the share trading part. as a CCID Head he would have been dealing with all the commercial entities hence, insider trading.. also, he now sits on the board of HO HUP-a crooked company that is in PN17 for the longest time and seem to be getting extensions upon extensions from Bursa...also dont forget his wife is a Judge