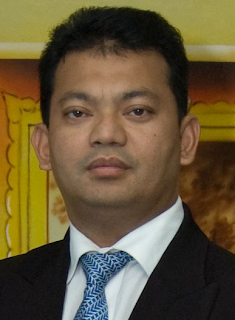 The coverage of our audience with his highness the Sultan of Johor here received some 50 comments.

The comments and content proves that the general public and not merely a small segment, truthfully or otherwise, have knowledge and opinion of the going-ons in Johor. It shows there is public concern with development in Johor that should be heed by the party concerned.

However the last comment gave an interesting link to a You Tube confession by someone claiming to be the alleged fugitive lawyer, Kamal Hisham written here and covered thrice by Bigdogdotcom here, here and here.

The person in the video have beards on but it has resemblance to the picture above.

In the video, Kamal Hisham express interest to return back to Malaysia to clean his name and cooperate with the authority, although he made no mention of his whereabouts.

He also expressed concern for death threat on himself and his family. He claimed he has proof to back his claim and believed a hired gun has been sent to murder him.

He claimed the threat came about because he refuse to follow the directive of a pembesar with regard to division of the estate of the pembesar's late father.

Subsequently, he claimed the pembesar had fixed him for committing many offenses which he denied to have committed. There will be a warrant of arrest to be issued for him.

He seek the help of the Malaysian Government and Inspector General of Police to save him and allow him to carry out his duty.
at 3/05/2012 06:00:00 PM