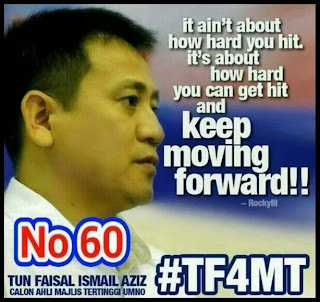 This is not because candidate no 60. Tun Faisal Ismail bin Abdul Aziz did us a favour before, thus it is time to return it back. Hardly so, because it is not about defending Tun Faisal's right to run but also of many others.

For some strange reasons, many have been denied to exercise their rights to run in UMNO's election by the power establishment using questionable technicalities, threats and sabotages.Thought that PM wanted to have the minimal requirement as possible so that the requirement to run for office is not  stringent and hindrance for new leadership talent.

UMNO need fresh new talents to rejuvenate the party, but the old and tainted ones just refuse to go away.

One would have expect someone with a Tun to be given some respect and passage to run but it is not the case for two time Pemuda UMNO exco member, Tun Faisal to run for Majlis Tertinggi.

Not known to many, Tun Faisal was involved in the Committee to amend the UMNO Constitution. So he has some knowledge of what he is doing.

Prior to submitting his borang, Tun had enquired with Dato Tengku Adnan, Dato raof and even Tan Sri Tajol Rosli. All said he is qualified.

This is truly ridiculous because if someone decide to play a role in Pemuda, that would mean he is denied a role later for Supreme Council unless he hold another post at Divisonal level. It defeat the purpose in terms effectiveness to hold too many positions in the party.

This is not in line with the Presidents wishes and aspirations.

At 41, Tun Faisal seemed too late to play mainstream politics in UMNO. Obama became President at age of 48, thus to be denied access at age of 41, what cock are we talking of rejuvenation? 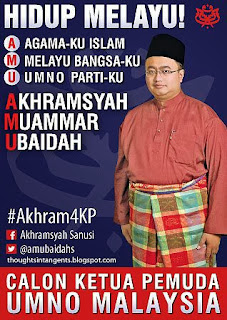 Hopefully that is the line of arguments our blogger friends supporting Tun Faisal should use. Not by comparing with Akramsyah.

It seems he never had been an AJK Bahagian member, so they said why is he allowed when the position of Ketua Pemuda is de-facto Vice President UMNO and sit on the Supreme Council.

This is a negative way of arguing. To fight for Tun Faisal, it is not by denying others. Ketua Pemuda is only de-facto and not the f*cking Vice President per se. Their position on the Supreme Council is by virtue of the position and not being contested.

Talking of Tun Faisal's age, by right It is a bit too old for those in their 40s to be in Pemuda. The right age for the Youth Wing should be 30 or perhasp 35, to make way for KJ, and below.

How embarassing isn't it for Malaysian youth delegates to go abroad and see the youth abroad is truly young. While Malaysia had Tan Sri Hamid led MAYC at the age of 70 with a cucu tagging along and Dato Ali Rustam used to lead belia 4 B in his late 50s. 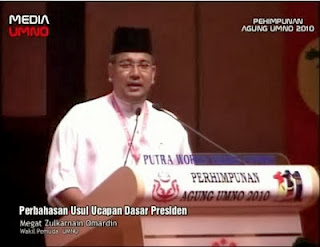 In Gombak, there is much talk and resistance to Son of Mahaguru Silat Omar Din, Megat Zulkarnian running for Ketua Bahagian. He is in his forties but they are saying he should wait in queue. So wait till he is 60?

He could lose so why all the fuzz to deny his rights? Even if he is to be made a laughing stock, let him run and play fair. 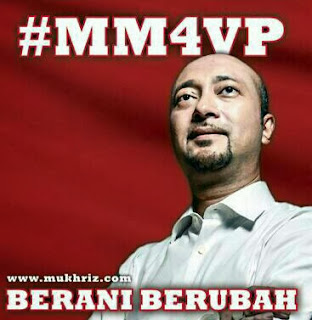 One excuse going around against Mukhriz is also that he is too young. Bloody hell .. he is 49, just few years younger than Obama at 52. Tun Razak, Dato Najib, Tan Sri Isa Samad and many others were assuming post in their 20s then!

Something really upsetting was this talk that UMNO Secretary General, who is supposed to be non-bias and neutral, complained on stage of the many candidates for Vice Presidents.

At one time, we used to have more than six, eight to be precise, so what is the problem.

His problem is he claimed that Dato Najib wanted status quo and only existing Vice Presidents should be endorsed. If that is the position, why don't they make it official that all the VP post should not be contested?

How is the party election process is to be trusted if this is the attitude of Tengku Adnan? Not only that, he was trying to meddle in the election at several Division. 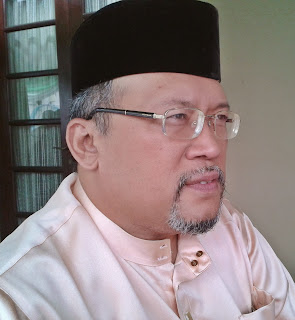 That posing mentioned about Seputih Division. Last night, the talk at Pan Pacific was of Dato Izudin Ishak of Setiawangsa Division being threaten to withdraw fromm contesting against incumbent Naib Ketua Bahagian and MP, Dato Fauzi.

They claimed Tengku Adnan threaten to pull the plug on his membership on several Board of Directors. One live on crutches and you stop standing by your own two feet. But why such threats? 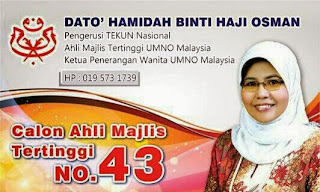 This talk of threat and coercion is also being heard to happen on Dato Hamidah. She is supposed to run for Naib Ketua Wanita and strongly believed to win.

Talk is she is being threaten with an MACC investigation by someone who is not PM and not in charge of MACC. As an independent Commission, no bloody politician should be telling MACC how to do their job!

[CLARIFICATION: So that no one have wrong impression on Hamidah, there is no ongoing investigation or issue to investigate her. We checked with certain sources.

Our sources also said there is no link between the 1Azam case that is under investigation by MACC with Dato Shahrizat. However, the 1Azam case involved a PEMANDU officer in the Ministry. A posting to come ....]

It seems ada udang sebalik batu and one can read on Tenggara blog here. If this is true, it is destroying the backbone of UMNO.

These is just a few blatant cases involving few personalities we know. In the branches and division, more such practises is likely happening. 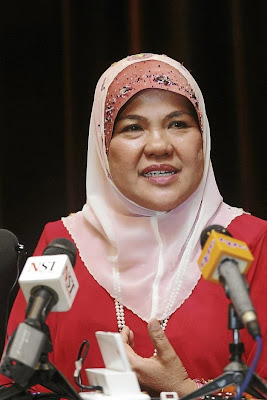 For instance, upon the knowledge of Dato Maznah Mazlan is to run for Ketua Wanita UMNO, two country bumpkin ran against her at Naib Ketua Bahagian level.

It is undeniably the hands of Ketua Bahagian, Dato Dr Jamaluddin Jarjis to cantas her. The two blokes are his men!

It is not so much as JJ supporting Dato Shahrizat against his own Wanita Bahagian but just his usual psychotic self insisting everyone kow tow to him.

On the other, so many speculation is going around and opposition would only glee in gladness if more wild stories on Dato Shahrizat and 1Azam investigation spread. 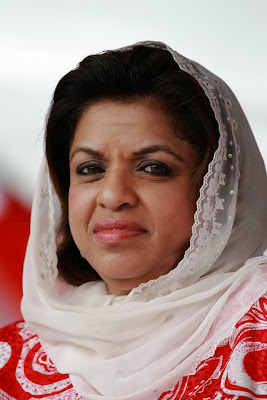 These are two sabotages happening. 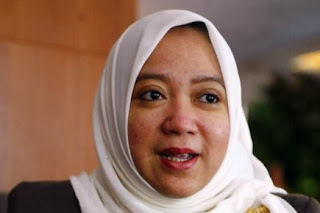 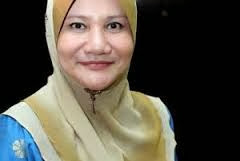 Somebody is playing his ACE card. This is typical of UMNO.

One side its open to member the right to contest. The other side is trying to play the usual game of UMNO.

Dont let this "tangan hantu" to create uneasiness within UMNO.

Who is in charge here.

Is it true that he claims to be the Ketua Gangster at the ruckus.?That tauchu(fermented blackbeans) or that tengku, which is which.? Some times back there was an article that he is a not a real tauchu or tengku, whatever.!We can google or any wikileaks about it.?Can any NGO's make a police report against this guy.? By being openly admitting that one is a gangster , ought to be questioned and remanded. Our police force claims it does not practice double standard, so why stopped at this bloke.?

Personally, no contest was the best option and keeping status quo is good as well. UMNO is about rights and if you don't have the rights, then u should sit quietly.

Bro i agree wif the general thrust of your posting. however, the fact remains tun faizal is ineligible based on the party regulations currently in use. its either oversight or misinformation. perhaps hisham, being the chairman of the special committee who recommended the current amendments, shud be requested to explain the rationale for the requirement for MKT aspirants shud have prior experience at divisonal level or mkt itself. assuming he is familiar with it and can explain clearly & concisely, of course...

, many have been denied to exercise their rights to run in UMNO's "

UMNO belong to Najib the uncontested Presiden and PM, so he the main player. If he honest he can just made his move to ensure fair play , but he too feminine. Please lah,UMNO is a bored warga emas status Polical party. They want to be democratic but they aint one of them. Don't challenge the top position, understand.! It must be STATUS quo, and do what ever it take to stay that way, Aint that Najib wish?

And on the flip side we have a PKR state assemblyman being appointed a Penang Exco at the age of 28....so what's all this "meremajakan UMNO" talk now?

UMNO is all about greed for power and dirty money.