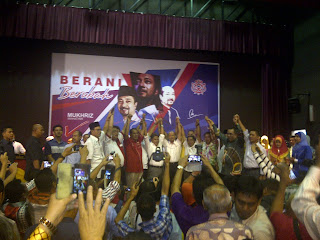 By the time we reached home to Kuala Lumpur from Alor Setar, the whole world probably know by now that Dato Mukhriz Mahathir has announced his intention to run for UMNO Vice President.

In fact, while the event to introduce the candidates from Kedah for national level UMNO position was ongoing, our Blackberry was constantly receiving messages from SMS, BBM, email and Whasapp anticipating Mukhriz to announce his intention to run.

Similar to the discussion on Twitter, blogs and Facebook, everyone seem to be in unison to say that two VPs are shakeable and it will be a one two and three for so, so and so.

All we can say is Mukhriz has a chance like everybody else.

While walking to board our return Firefly flight back at the Alor Setar, we asked of his chances with one Ketua Bahagian.

The Dato shared his confidence and it's something worth pondering over.

He believed Mukhriz is an already accepted brand associated with another long proven 22 years in office brand. It does not matter whether he had not won any Ketua Bahagian post or lost in the Ketua Pemuda race, he has an image of himself and it is closely associated with good values.

He believes that Mukhriz is basically recognisable to the younger and more inclusive voting UMNO members so he does not need to campaign to hard to introduce himself. All he need is to keep his message continually heard.

It helps that Mukhriz as a product was accepted not only by the PAS controlled Air Hitam state assembly area but contributed to return UMNO back in power in Kedah. From losing the  youth leadership in UMNO, he rebounded to be Kedah Menteri Besar and state liaison chief. Everybody loves a winner.

Thus far, he is putting the right foot forward in Kedah. Furthermore and this matters to UMNO, Mukhriz never betrayed the party.

The Ketua Bahagian said there are some "wahyu" from above giving orders to maintain status quo but with 130,000 UMNO members voting, how is he to stop what members will vote.

He said the number of votes will be electronically keyed-in and collated at the state level before compiled and added together at national level. There is no electoral colleges by division basis as what we understood it to be earlier.

He see it that the young will not want to elect those old tired, tainted and fell out names. They will wish to be associated with those they can closely relate to and Muhriz can spring a surprise.

Off course, campaign is important but as he see it, all Mukhriz need to do is to keep his message fresh.

In his acceptance speech, there is a new energy and dynamism in his tone of speech. Pardon us because we still remember how he would endlessly stammer with many ah... in his speeches. His political secretary, Dato Azimi Daim must have something to do.

One message that he said was and it is in line with his new Berani! Berubah! war cry, UMNO must face up to the facts that the Kit Siangs, Anwars, Karpals, Nik Aziz and Hadi will make way in the next election.

The opposition have young ones to be the faces of the parties and UMNO have no choice but keep up with the changing times.

By GE14, there will be 3 million new voters and 60-70% of voters are those below 40 of age. This new profile of voters will want to be associated to those leaders of their own than those leaders admired by their parents and grandparents.

That generation has no tolerance to excuses for inefficiencies, mismanagement and corruption. They do not easily give their loyalties except to those they respect or have high regards for.

If he loses
All the blog campaigns by so many blogs wld be in vain.. and malu to u also!

Win or lose is no issue. This is democrasy.

Anon 6.05 is just a typical umno guy. Malu for losing? Huh! Ppl shud be malu for not wanting to contest, malu for taking bribes, malu for being kaki ampu, malu for winning unfairly... But there's no such thing as malu for losing especially if it's an unfair fight.

So syabas to Mukhriz! Hope you will win. We need younger people in UMNO leadership. Yang dah melangkaui umur persaraan 60 tahun, silalah jangan bertanding. Beri chance lah orang in their 50s and 40s to take the lead. Your time has passed!

I am anon 605am, I think that after all the "assistance" you guys are rendering him, he should win as first place. Already he lost KP last time, honestly, Im happy if Hisham loses, by the way, you method of writing English is a bit weird. A lot of errors in tenses, just a note.

I was hoping that some senior UMNO MP contest against Presiden and Tim. Presiden.

ENJOY THAT SPORTS MINISTER POST WHILE IT LAST BRO ...

Mukhriz lose ? come on be real, look who s the daddy.

That is grwat news, I pray that Mukhriz will win.
But i am left wondering, on the lack of similar potential candidate amongst the younger UMNO people.
Has all those years of cantas-mencantas take effect?

The best reply for the 6.05dunggu

I'm more afraid of the electronic voting system. It is so easily manipulated.

Why most of the new faces candidates dlm umno has to be related to the old faces.

The rest dont have the genes ke ?

Look at facts ma. Mukhriz is the son of the most corrupt UMNO leader Mahathir a son of a Kerala Indian.