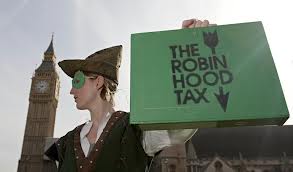 Former Director General of the Department of Statistics, economic planner and activist, Senator Dato Akbar Ali called for widening the net on tax collection on groups still running away from taxes. To quote from his blog Darah Tuah here, he suggested:

Given the much talk on crime and gang war, one such group is the criminals and their black economy. They do not pay tax. However, chasing after criminals is not the scope of our tax collectors.

Nevertheless, the government should look at another area to raise tax and that is the insuficiently taxed rich. While the wage earner have to pay tax, Malaysia has been too friendly with the asset rich wealthier class. Our stock market capital gain is non taxable, property gain tax too weak, inheritance tax abolished, and basically, their wealth is not sufficiently taxed.

There should be so form of Robin Hood Tax. [Read about this movement in the UK here]. Will MNC and big business friendly PEMANDU ever recommend such a proposal? 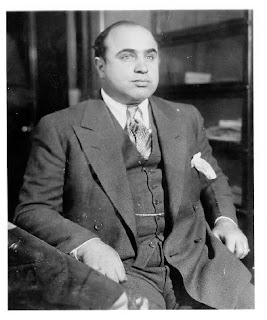 The black economy is covered here because it is big and made many wealthy from the business of crime.

According to a former police high official (name won't be mentioned), black economy is as high as RM400 billion a year. Malaysia's nominal GDP for 2013 is forecasted by EPU here at RM1 trillion. Our total import and export is estimated to be RM1.3 billion for 2013.

Unless IRD has their own Eliot Ness that went after Al Capone for tax evasion, that way of "raising government revenue" is best left to MACC and police. Better still should Latheefa Koya, Surendran, Lim Guan Eng, Karpal Singh and Lim Lip Eng wish to cooperate rather than collaborate.

Transaction in the black economy is all cash and COD. There is no record of their transaction. For law enforcement officer to stop such activities is the Money Laundering Act  or AMLA. It is supposed to be  crime for one not able to account for their wealth and cash in their bank account.

But, our judges seemed to be more concern with saving the criminals. Unlike in other places like Singapore and China, our judges insist on specific act of crime be established with the requirement evidences.

Rich gangster hire professional lawyers, tax experts and some have law enforcement officials in their payroll. Corrupt official makes it difficult for any charges to be made but black economy operator usualy have money cleansing operations.

One way is to have business outlets.

Cash is funneled through such enterprises and transactions created. The best is entertainment centres but retail businesses is also used. Do not be surprise if one see huge business or retail outlets that is seldom visited or little transaction but yet can sustain for many years.

As far as criminals are concerned, the law enforcement and attorney office should be dedicated to wipe out the black economy. It distorts the economic fundamental. There is no way a Bumiputera retailer with government assistance and help could compete with their retail competitor whose core business is in the bleaching of underground money.

That is why those opposition leaders are so concerned with the human rights of criminals. 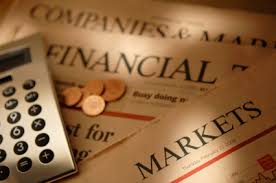 The main source of income on the lesser economic being is their salary and that is being taxed. But, the rich get their income from their wealth and mostly in the form of asset.

The paltry return from fixed deposit, which is the most popular savings and investment mechanism for most Malaysian, are taxed but capital gain on the stock market is not taxed. Furthermore, too much leeway and concession given to encourage stock market investment that it goes out of whack from fundamental characteristics of stock market.

The only return the investing public get from listed companies is dividend but it is insignificant and like fixed deposit, it is taxable.

The rich public listed company owners gives out paltry dividend despite improvement in company performance and only concerned with getting prices of stock up. When shareholders complain on the low dividend payout, they are told to sell and take the capital gain.


This is the reason dividend yield is not so important in valuation of Malaysian public listed companies' shares. Thus, making Malaysian market highly speculative.

Pity those Gen Y who just read Graham & Dodd's and wear by Warren Buffet method, to only realise that stock market prices rises not so much on fundamentals but information not publicly available.

Who is to know ahead that Sensol share prices exploded last Monday because Tan Sri Nor Mohamed Yakcop's son was appointed chairman? 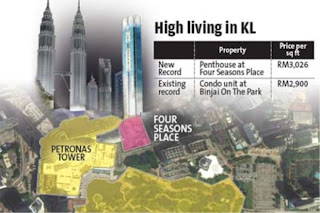 Off late, property prices have skyrocketed too fast.

That is only part of the picture. Another is the factor speculation. Financing have been quite abundance for second home, third home and so on that the rich buys high priced properties for capital gain. Like our stock market, our property gain tax is too lenient.

As a result of the artificially inflated demand for high priced property, developers are going more into that sector of the development market. Even state development agencies like in Selangor and Penang are jumping into the same bandwagon.

This is coming at a social cost.

Lesser number of affordable homes for rakyat that federal government have to step in using outfit like PR1MA.


PKNS is heard planning to expand the concept of the controversial Datum Jelatek development to buy low cost plats and apartments in Ulu Klang area to be redeveloped into condominium. The business model used means the housing needs of foreigners are more important than locals.

The plan by PKNS is intended to change the political demography of three Parliamentary areas of Gombak, Setiawangsa and Titiwangsa. If true, the Malays working for PKNS is helping DAP to be more dominant.

Too much money in the banking system is channeled into this easy to make money property venture and high degree of expose to speculative investment.

Since there is little political will to stop free market and the interest of developers groups like REHDA as championed by the Developers' Association of Penang (DAP) [read The Mole here], profit or revenue from sales of high end properties be taxed heavily.

Capital gains from property appreciation must be taxed without exception. Or property transaction at above a certain price must not be exempted from property gain tax. Otherwise, the tax structure favours the rich.

Many in the upper echelon of the economy and politics will not agree but Innerblog here has a good logic. We reproduced it with some editing to be more politically correct, below:


When government spent on road and infrastructure within the town centre, the land value would increase tremendously thus indirectly land owners, should be taxed with betterment levy.

The benefits from the increase in land value are wiped out by the owners when they sell development units at high value, which for some properties, ballooning to million of Ringgit.

The government is losing on two folds, one, the burden of infrastructure cost is spread over to all rakyat, including people in the campaign who made money from the government’s work, thus unfairly causing hardship to comparing people at large. Two, the town population is laughing with tons of money with the help of government.

In cases where property falls in value due to the government or the local authority’s bad policy, the landowners on the other hand seek compensation due to the likely lost in the capital value of the bad policy or the infringement to their land.


Both betterment and infringement levies may be useful to reduce property price in the city centre, and is a potential avenue to increase government’s revenue.

The high price property owners should pay for the cost of the government projects that benefit their land in the city centre.

It’s time the government blows back the capital expenditure on infrastructure that beautifies their homes and business premises in the city by taxing them on the betterment levy. The kampung folks do not directly enjoy the beautification projects and good infrastructure in the city centre. 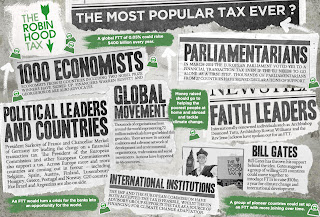 Capital gain tax from stocks should be channeled to government coffer. Money made from selling property to foreigners and rich should be taxed more to be channeled to programs to provide homes to locals and those in the lesser income.

Malaysia is believed to have had inheritance tax but it has since been abolished. It is time we reinstate such a tax. There can be exemption for wealth that have been plowed into productive ventures that is beneficial for the nation, truly charitable cause, and increase our scientific and intellectual capability.

The problem with the rich in Malaysia is that they are too kedekut to do such a thing. They favour the Yahudi banking system that is based on banks and insurance system that stay away from risk and preserve the wealth of the rich. They even have protection against god sent calamities.

The wealthy hide their expenses and asset in companies, thus get tax exemptions and pay lower tax. They can afford tax consultants to help avoid taxes and use of off-shores tax havens. Such loopholes need to be covered.

In Islamic economy, state have power to take back unproductive land. Off course, such law cannot be used but the concept in zakat is applicable. Unproductive capital idling in investment instuments that does not increase productivity, increase economic capacity and create jobs should be heavily taxed.

The rich have roles and responsibility to society. Investing and contribution is some ways to contribute. If they refuse to do so, then tax their money.
at 9/09/2013 10:12:00 AM

so are the mamak shops own by indians

and road taxs and petrol for the expansive cars rich

they should be taxed

I am already paying RM806.60 a year for my quit rent in Cyberjaya. Mine is a townhouse.

My friend living across the Putrajaya link pays only RM100 a year for his corner lot house.

How the local council calculate the quit rent is to get the average rental price in the area and multiply with a percentage (say 7 or 8%)to get the amount of quit rent to be paid by the residents.

Therefore, to argue that better road condition/public facilities warrant a higher tax regime is not accurate.

If betterment tax or wealth tax is to be imposed, people like me is going to suffer more.

WHY ALL THE GLC PROPERTY STATE COMPANY NEED TO BUILD A HIGH END PROPERTIES? THE PURPOSE OF SETTING UP THOSE GLC IS TO HELP THE RAKYAT,TO OFFER AFFORDABLE HOUSE AT RM150K-RM300K, NOT BUILD UP THE BANGALOWS AND THE EXPENSIVE HIGH END CONDOS..

Malaysian UMNO govt. should tax hundred of thousands of Malaysian Chinese working in Singapore...like the mainland China taxing their citizens who work in Singapore...billions of ringgits yearly...he should seriously thinking of implementing it.

It is high time to collect "real rent"!

You think nazri will support this idea?

The new Christians or the born again Christians are the richest untaxed Malaysians who attempted the remove the BN Government as led by the UMNO with the 13 component parties operating out of their RM2 incorporated churches. This shows how tolerant the BN Government has always been. My illiterate sister-in-law who worked in a hair dressing salon by washing hair, formed her own RM2 incorporated church AND MADE TONS AND TONS OF TAX FREE MONEY WHICH SHE INVESTED IN LONDON AND MADE TONS OF MONEY MORE. IS OUR BN GOVERNMENT SLEEPING AT THE EXPENSE OF ALL THE RAKYAT WHO TOILED AND SWEAT EVERYDAY ?
SINGAPORE HAS A CHARITIES COMMISSION WHICH CAUGHT ONE CHURCH WITH MILIONS AND MILLIONS OF DOLLARS IN THE WRONG BUSINESS.
There are many huge buildings owned by these new and untaxed Christians.

I know another born again Christian who appeared on the front page of the NSTP handcuffed for stealing RM 1 Billion. He got away by paying on RM 4 Millions and did not go to jail. Money ! Money ! Money !