And it is about corruption, and collusion of the highest order.

He felt some 'senior bloggers' have not been fair to pick on Fara Intan's personal life and described it as "perception manipulation and deceptive."

He is wrong. There is nothing personal against Fara.

Goh has been long enough in the blogosphere. He should know that we write based upon our conviction.

McKinsey is an accomplice of PEMANDU in fleecing government money for flimsy papers of little implementable value. Diverting the budget under MOE, the sum of RM20 million easily dispel Goh's proof.

PEMANDU has stationed officers in Government Ministries, Departments and Corporation. Supposedly these young, genius and highly paid professionals will guide government officers and staff to improve delivery and performance.

Bigdog is already at it with PEMANDU's centerpiece of excellence in FGV, CEO Emir Mavani.

In his latest expose here, he exposed another case of stealing from the poor settlers-farmers.

Before this, he exposed here FGV purchased a suspiciously over priced plantation and hotel in London here.

This expose will prove our point further. It may have also by-passed Goh's radar. 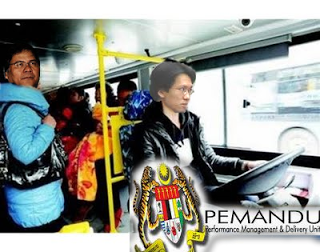 Our expose involved an NKRA officer in a Ministry which turned out to be "harapkan pegar, pegar makan padi."

It is is not about crooked politicians or politicians' assistant but government officers which PEMANDU is supposed to think on how to address. In this case, the government in-house consultant supposed to stem leakage was the one orchestrating the corruption and kickback.

Stay focus and not be diverted into politics. Crooked politicians can be thrown out in elections but it is not easy throwing out crooked civil servants. More difficult will be to throw out PEMANDU, the golden child of the present government.

PEMANDU is so powerful and influential that their area of responsiblity have gone beyond their scope of work and area of expertise. For instance, failed former MAS CEO and PEMANDU head, Dato Idris Jala is heading the committee on crime prevention.

He could even get Ministry of Finance approval for a government corporation in which the Chairman himself couldn't. The chairman happen to be a former KSU.

We'll quit stalling and get back to the story

This is about the 1Azam fund that got into public attention arising from the detention for 5 days of questioning of former Political Secretary to the Minister for Women, Family and Community Development (MWFCD), Dato Suhaimi Ibrahim. 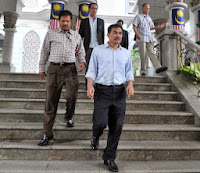 Suhaimi denied in a press conference of his involvement [read here] but to be held for 5 days for investigation, it make him highly suspicious.

Thus, one cannot understand why he is going around the country in Dato Hishamuddin Hussein Onn's campaign entourage. Minta nyawa (seeking a lifeline) or lobbying for position?

Whichever it is, as in the past, Hishamuddin does not seem to be thinking of the implication and public perception towards him.

Actually, just after Suhaimi gave his press conference, we had asked around and was brought to a small time contractor who was awarded contracts in the 1Azam program. From there, we were led to many other suppliers and subcontractors.

It was only few nights back and it was late that we met were brought to an insider from the Ministry. 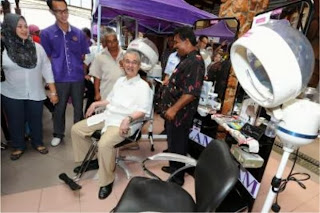 He was able to give a big picture of what happened. He pointed it to the Ministry's MKRA officer by the name of Hazmi Samsudin as the schemer.

That is why one gets strange news on 1Azam such as "1Azam records 55.3 pc cut in national poverty rate" in the NST here. It is very much PEMANDU, very Idris Jala and very MacKinsey & Company style of spinning.

Hazmi was so in control that he was even quoted by The Star here and here, Kosmo here and Bernama here with the same wow! factored comments.

Frankly, the NKRA officer is such a young ciku. There was no sophistication and his modus operandi was quite predictable. Kerja banyak auta. Mencuri pun tidak pandai.

When asked whether Suhaimi Ibrahim or Minister was involved, the insider said he didn't know. Minister's do not deal with operational issue but only major decisions and policies, thus it is government officials that has a hand in any form of hanky panky.

We are not saying this because we are campaigning for her. Staying away from it for the moment. Sick ...

Shahrizat has denied. [Read Utusan here.] Unless she had given directives, written or otherwise, and it can be proven, it is unfair to accuse her.

As far as Suhaimi, our insider was not sure whether he had done any hanky panky to enrich himself. He only said he saw him using the mentioned cars for his personal use.

However he was sure of Hazmi and confident he will sure to be charged by MACC. He said, "Abang jangan takut kena saman. Adakah dia boleh saman kalau kena dakwa?"

According to the insider, this happen during the time Shahrizat was Chairperson of Yayasan Kebajikan Negara. The 1Azam program remains till the today and the time Dato Najib was the transition Minister of MWFCD and Chairman of the Yayasan.

Unless Shahrizat and Najib made any directive, neither of them are involved in the running of the fund. He only know that Suhaimi has assigned Hazmi to coordinate the program. 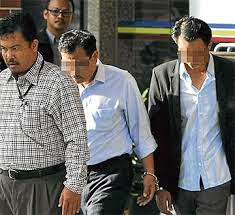 At the assistants, runners, and front contractors and suppliers level, they rake in a cummulative of 20% of the program's budget. The balance is likely to be for the real contractors and manufacturers doing the work.

To get themselves paid, Hazmi's assistants take care of the payment but it is not paid direct but only to the front. The money due to the real contractors and suppliers is released by the front companeis after deducting for everyone's cut. It means there are paper trails everywhere.

Hazmi designed the budget for programs to be usually few ringgit short of RM5,000 or RM100,000. Above that, the control system is stringent and manipulable.

If this does not make your blood boil, we do not what else.

The budget for the poor was spent to buy 15 vehicles fit for an Abang King's mistress.

The list came from somewhere else. Some guys at Putrajaya went snooping at the MACC lot. Hold on to your seats. It's gonna be a bumpy ride.

If our memory serves us right because we do not know much about recent car models, there were two Toyota Alphard, two Toyota Camry, Volkwagen GTI, Volkswagen Passat, BMW 120i, BMW X63.5i, Porsche Cayenne, Chevrolet Cruize, Audi T5, Audi A5, Mercedes Benz 52080 and Harley Davidson motorbike.

These vehicle are not in their names but bought using 1Azam fund and presumably used for the program but used for their personal use.

For RM900 million budget, Hazmi must have earned something like RM90 million. Since he is still with government, he can't spend it but young punk with some much money can't resist the temptation. 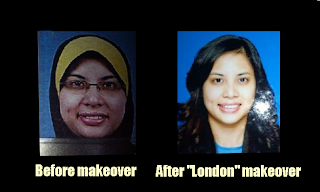 He spent it on a girl he had his heart for in the Ministry.

She was given a total makeover and treatment in London that she glows like a movie starlet or Zahida Rafiq upon her return. With Hazmi's money, she stopped going to Kamdar and Globe to only shop in London.

Will update, when receive picture of her. Bookmark this posting first. [Note: Picture updated 2/10 10 AM]

It seems he also has two condo in Ulu Klang and Subang.

The Choice, Goh Wei Liang and Stephen Doss in his new blog will definitely await with bated breadth for further news on their celebrated PEMANDU staff at KWFCD.

Insteresting on how are they to defend PEMANDU on this morally revolting act There are still many more up our sleeves.

Shahrizat can be legally clear but then, it does not make sense that she does not know 15 cars including luxury ones were bought.

It is like she does not absolutely know the business affair of her husband and children's NFC.

Assuming she does not, it shows she is a poor leader.

Today's leader cannot completely assigned others to do task without monitoring their work.

you sure or not this guy planted from pemandu? looks like this guy is a ptd officer...

Er who is Stephen Doss in his new blog? Can't quite figure this one...

I guess we're only at the tip of the iceberg stage.

What you are doing is noble and i laud you for that. Thank you.

Lets see where it goes from here. My money is it will go no where.

Nothing will happen. Maybe a someone will be charged to take the blame but that will only be a front.

Once convicted, the news will go cold. The guy with his backing will appeal and will be free to roam.

Thats how this country works now.

i think its time for a change in system to run the government. we may do some renovation on ministers tasks and jobs.

isolate them just for policy making ala US congress/ senate

and leave the running of ministries to some other government officers. and lead by secretaries. just like the US system.

it is IMPOSSIBLE for someone very high up like shahrizat to know every inch of the details. what if the ministers are fed with good stuffs everytime?

this guy hazri or hazremi or whatever, his MO - if hes proven to be guilt of what u said of him -is classic. and of course predictable. but for someone very high up like ministers, they very impossible to check every single little details

the current system is of course good, where u got assistances and someone doing what ministers decide for his her ministry, but it is NOT GOOD if the assistances are devils and toyols

This is BS . 900m fund approved by MoF and nobody link this stuff to the ministry. Hazmi not that naive. Put the pieces together la

Share the same sentiments with PJP.
Its a noble thing for you to become a one man investigative unit. And the funny thing is if you can crack this case in 2 weeks, why is it MACC has yet to move on this matter. Usually the MO is to launch something and then go quiet about it. I would say maybe backroom deals are being hatched. After all why is the murder of Datuk Shaharuddin Ibrahim still not solved after so long.

Stealing from the poor, covering up murders and the like. This is the reality today. Everybody has a price.

We would think that MACC needs more than our simplified story to make a "legally" plausible case.

Furthermore, they don't murder case. They just throw the difficult ones out the window. Sorry black humour...

Helping themselves in the name of helping the poor. By the time they finish there is nothing left for the poor. Such people are shameless and devoid of morality.

Pemandu don't have the relevant experience or personnel. Do they even do their research carefully?

They should also hire organizational psychologists to assist with the policies and implementation.