There's a gay in the office! 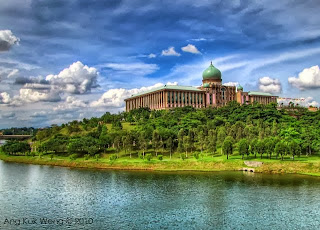 Was alerted this morning by a Whas App message of a blog revealing an affidavit involving the divorce case between an officer in the Prime Minister's Department and his former wife.

Yes, she is the daughter of Mongolia's Honorary Consul in Malaysia Datuk Syed Abdul Rahman Alhabshi. When they got married in 2010, it was not actually a marriage between celebrities but the pomp and pageantry was close to one and dubbed the wedding of the decade.

The affidavit revealed a dark side of Dato Najib's Head of Policy and Research at the Prime Minister's Office. It will be viral in the next few days. As always, anything with S E X, normol or abnormal, will always be HOT HOT HOT ... issue.

In the affidavit posted by The Benchmark blog here, it revealed this fella has some weird sex practices. We highlight below: 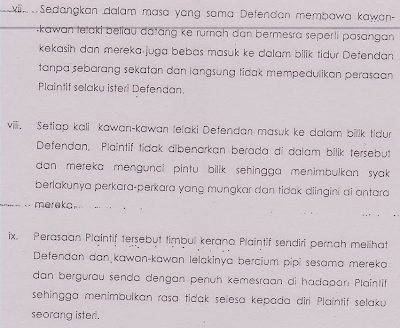 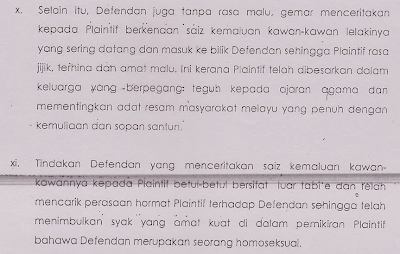 The story has been circulating for quite a few years. Back in 2010, opposition blogs and portalforum  have been playing this story. Read in Milo Suam here.

We have heard of this talk for quite a while.

The then The Mall, in front of Pan Pacific where it is the gossip corner of the latest happening in UMNO, was a buzz with the lawsuit by Dato Syed Abdul Rahman against former blogger, Zaharin for his Facebook comment in 2010.

Since then, there have been an off-the-court settlement between them recently. Read here in The Star.

We've not given much heed to this talk and thought this Khairul Annas fella have gone to ISIS. But now that the affidavit is made public, it will be a headache.

Khairul started out as a Special Officer and now after Dato Mazli bin Muhammad have left PMO, he was said to have assumed the position of Direcctor of Policy and Research Division.

This man, if we can still call him such, is now addressed as Professor Dato Wira Haji Khairul Annas Jusoh. He sounded distinguish and straight like academician like BN's candidate for Sungai Limau.

This will give be a headache on two accounts. 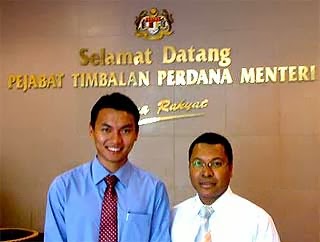 First, this chap was said to have known Saiful Bahri personally and brought him to meet Dato Najib with regard to allegation of being sodomised by Dato Seri Anwar Ibrahm. The opposition then accused it as a set-up.

Now that Anwar was acquited and acquital appeal by the Attorney General Office is coming on December 11 and 12 [read in FMT here], there would be a new twist coming in PKR's propaganda.

Expect Anwar to ask for postponement based on this new revelation. By right it should not, but one will never know how lawyers for Anwar can spin it into his favour and expand their conspiracy theory further to create more doubt of his homosexual inclination.

Their blog are already at it. Read Greenboc here.

Second and this is more relevant, Dato Najib has to reconsider Khairul Annas position in his office. He will have access to a lot of information, both public and confidential, that is critical to the Prime Minister.

Our wild imagination is thinking that he could run off to Anwar and leak information. You know how people of such inclination is likely to be protective of each other and behave and think alike.

Seriously, it makes Khairul a source of blackmail and a security threat to the PM. Someone need to advise PM to release him.

We are also wondering, why now the leak? SUARAM? CIA?

The fact of the matter is if Ah Jib Gor can have a 'gentleman agreement' with peliwat Anwar and witness by Jusuf Kalla about the GE13 outcome,its no big issue to Ah Jib in fact it will make him popular with the non malays and the Americans which JJ is trying hard to make them like our Ah Jib Gor.

Don't tell us that Najib is not Aware of this Guy's Preference!?

For all you know he was employed BECAUSE of his Nature. Like they say...Birds of the Same Feather Flock Together!

so Raja Petra already said this back in August wei...

Coupled with the push for the acceptance of LGBT legality and also the religious pluralism ideology of ambiga-anwar-dap-evangelista this is pushing the decent folks of Malaysia towards the Abyss of Abominations:

Homosexuality is Demoniacal: Hear it from a good Christian
http://www.youtube.com/watch?feature=player_detailpage&v=6iTBHwG1bAo

This fella may hv caught d habit during his days at Sekolah Alam Shah.ha3

He is now the official apointed Advisor to the PM. He has been engaging in this wierd behaviour openly even at public places. He is now living in a the fast lane after cashing a lot of money. I bet Datuk Mazri knows a lot about this guy.

This guy not only a gay. He sounds like a fraud. Where did the professor title come from? When he left PM office three years ago, he was just an ordinary Annas jusoh. Three years later he is a PhD and Professor. It takes more than 10 years for anyone to go from associate professor to professor and even then you gotta be brilliant. Why is Najib hiring frauds and fakes in his office? Answers please!!!!

This guy is a real deal up to his personal preferences.
Apparently he has been using his Position in the PM's office to amass fortune running to Millions of Ringgit.

If you dont believe ask Bitara Induk Sdn Bhd how did they get hundred over millions of contract from MOE :D

And ask BItara Induk also how many more billions worth of conract this guy will facilitate for them from MOE.

Profesor of what? Check http://ms.wikipedia.org/wiki/Khairil_Annas_Jusoh

He's just an Adjunct Professor, nothing more than that. I won't even consider him an academic. Even he's Ph.D is from AeU, not UM or overseas institutions of higher calibre.

Can anyone confirm if it is true that his mother is sister to the current Permaisuri Agong from Kedah?

I heard that he got a few houses which cost more than RM1 million each at Shah Alam.

A meow meow pm and a guy in jpm

Are we going to hear soon from the fooool's wife any such declarations? Give a week for PI work to be done...

No his mother, whom already outcasted by him, to the extend of not inviting her to his wedding is not related to the current Raja Permaisuri Agong, she living in Ustaz Kazim Elias's pondok in Perak

When Elton John came to perform in Genting many people were up in arms because he is gay and yet we have such ilk right under our noses and in the corridor of power!

I think he is minister of finance 0.1 - higher than PM :P

Allah is great, those who accuses Anwar Ibrahim of homosexual now receiving the wrath of God.