Sovereign is above internal party election 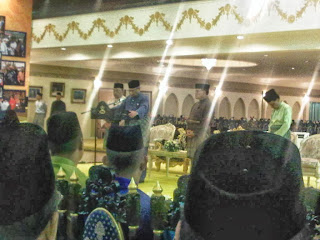 According to the blogger, there was a dinner and event for 5,000 "community" leaders getting an audience with his highness the Sultan of Pahang at the Istana Abu Bakar in Pekan last Saturday night.

It can be considered an auspices event since his majesty's 83rd birthday is drawing near and this year is the 40th year as ruler of Pahang.

In his royal addresss, his highness reflected on the nation's history from independence till today and expressed concern on the future of the Malays in the light of certain elements in the nation dare to question Malay 'sovereignty', Malay rights, Islam etc.

His majesty expressed hope that Pahang continue to prosper, rakyat taken care and Malay politics able to face such challenges. 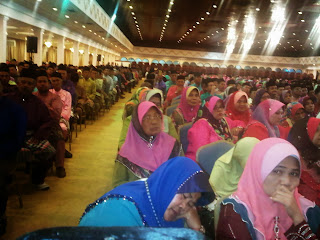 However, before the posting by WZWH, an SMS reached us to tell us that the event was more than just the Sultan's address. The "community" leaders invited to the Istana were UMNO branch delegates that will vote in the UMNO election.

The whole thing was about campaigning for a Vice President candidate and it was openly expressed.

The only information we have on the Vice President candidate is that he has family link to a member of the royal family and his family member organised the event for his benefit.

Our concern is to what extent that SMS has spread because it would disgrace the Sultan by putting his highness in the precarious position for intervening in rakyat's political affair. 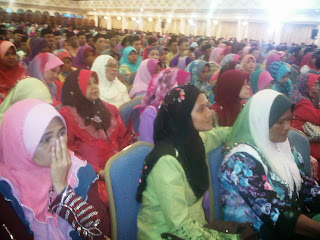 During the Galas by-election, Rockybru wrote to pre-empt a royal intervention in a by-election campaign here. He linked it to an article by Bigdogdotcom here which caution the rulers from being used as political tool.

In the last general election, there was also concern on a Sultan direct involvement to campaign against a rival royal family candidate.

On a matter of fundamental significance, the ruler as sovereign should stay above politics, more so in intra-party politics.

It is enshrined in the constitution and agreed prior to independence that Malaysia will be a democratic country and the Malay rulers have agreed for people rule.

Rulers role are clear in the constitution thus for such an SMS to claim Sultan campaigned for a Vice President candidate is highly improper.

If the Vice President candidate really had used his family link and Istana connection to gain influence of delegates to vote him, he has abused his position and broke party election ethics.

There implication of his action is that it gives the wrong message to the Istana that people are not capable of self rule and it requires Istana intervention to enable the people make the right decision to vote him back.

Since Malay interest and rights are not defended and compromised by some political leaders, we might as well  revert back to total monarchy system and return power to the Sultan to rule and administer the country.

This is not criticising to bring him down but a matter of fundamental importance in governance.

The Malay rulers are clear in  their understanding of their role in administration. The sovereign is above partisan politics and intra-party politics, including internal party election.

It would be a shame and a major embarassment that an UMNO leader does not understand his place and role in the constitution.
at 10/08/2013 08:31:00 PM


On Saturday evening, the Sultan of Pahang hosted a big dinner for Umno division and branch leaders from Pahang. Some said the dinner was to celebrate Najib winning his president post unopposed. But Najib was not there and some of those who attended said it was essentially for Tuanku to meet his subjects.

A division chief who was there said that Tuanku made an after-dinner speech congratulating Najib and said that Pahang is proud of him.

“Tuanku spoke about Malay unity. He reminded us that Umno was born in the palace and that it is part of his duties to keep up with what is happening in politics. Tuanku also proposed that Pahang delegates give one of the VP places to Hisham,” said the division chief.

The endorsement from the Pahang palace is hardly surprising because Hishammuddin’s wife is a Pahang princess. It will be interesting to watch how many of the 14 divisions in Pahang will give Hishammuddin the nod of approval.

IF YOU ARE GOOD MEANS YOU'RE GOOD.
KALAU TAK BAGUS, TU TAK BAGUSLAH.
LET MEMBERS DECIDE...........YOU CAN STILL CONTRIBUTE, NOT NECESSARILY AS A VP.
BACK BENCHER PUN ADA JOBS TO DO !

It is incorrect to imply that the Royalty has no right to Intervene in UMNO elections.

The royal family may feel that they have every right as they claim that UMNO was born in the palace and that Royalty and UMNO is intertwined for both stand for Malay Rights. More than once UMNO has intervened in the affairs of royalty, so why can't royalty intervene in the Affairs of UMNO? Those who questioned this have their own agenda which is not to the benefit of the royal house.

Anon 12.13 PM. Its true UMNO was born in the palace but its not for individual. Its for Religion of Islam, the Malay race and the country. Defernately not for Hishamudin the warning minister and CKMM.

Think hard and think well para perwakilan sekalian. You will regret for the rest of your life if your vote mistakenly goes to him.