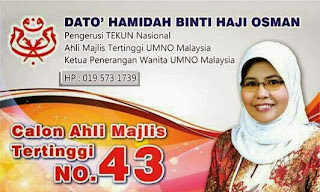 After finished voting, we quickly packed to head for Sentral to get on the next available ETS to Ipoh.

Our buddy was there for a month helping out the campaign. It's customary that we wait out any by-election results together. It is away from the jubilant or mournful crowd and no hobnobbing with politicians.

To cut the story short, that night we waited for the results alone in the hotel. After a series of poor results coming out and DAP was winning this and that seats, we got nervous and stopped entertaining any calls and enquires from inquisitive friends. Sibuk betul ...

Hamidah was the incumbent state assemblywoman for Sg Rapat, Perak and Information Chief of Wanita UMNO.

Not knowing what is to come from her later, the first word she uttered, "We won Perak. It was close by few seats but we regain back Perak." 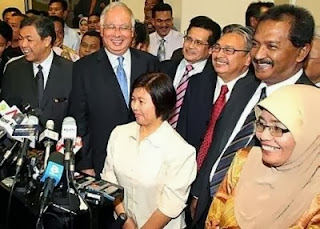 Hamidah was personally instrumental to win back Perak from the grasp of DAP and the puppet Menteri Besar, Dato Nizar Jamaluddin in 2009 with the departure of three Pakatan Rakyat state assemblymen.

After several exchange of comments and info, only then she revealed.

There was a long silence.

This was the woman who through her unselfish attitude helped few opposition assemblymen in their unfamiliar role as members of the state exco. Her intention was merely to see that the state was run properly and Malay interest are protected.

Consequently, she gained their trust and became the shoulder for them to cry and pour out their frustration with the vicious enfant terrible cousins of Ngeh Koo Ham and Nga Kor Meng. All these was kept confidential without any intention to politically exploit.

After a year, the cousins just got too unbearable. It was this trust and friendship that moved them to turn independent and support BN resulting in a power shift to BN. There was no conspiracy but Ngeh and Nga fault.

Read MIK campaign for her here and this video below by former Perak Menteri Besar, Tan Sri Tajol Rosli:


There was talk then that Hamidah was being considered to break the glass ceiling to be the first woman Menteri Besar but Pak Lah's preference was for Dato Dr Zambery Kadeer.

Inspite of that, Hamidah bore no grudge or have any intention to wrestle power from him. She was quite comfortable being a senior exco.

We were awaken from the silence and our wandering 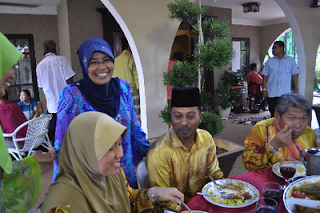 Through out the Perak constitutional crisis, Hamidah stand out in handling of the court case and addressing the opposition propaganda. She was one of the earliest to realise the importance of friendly free-lance bloggers.

Subsequently, in her position as senior exco and Information Chief of Wanita UMNO, Hamidah was one of the voice that the pro-BN press and blogger look forward to hear in any public issues to answer or attack the opposition.

Hamidah endeared herself with bloggers throughout the series of by-elections and to a certain extent, she became the centrepoint for bloggers to discuss issues and suggest campaign ideas. 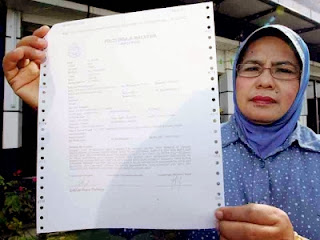 She was willing to make bold statements on issues relevant to the Malay interest where other UMNO politicians shyed away. In the Perak State Assembly, she could cow the Ngeh and Nga.

Be it for spending a whole year to coach and engage privately the opposition or in her community work as wakil rakyat of Sungai Rapat, there is a great sense of selflessness in Hamidah.

Despite contributing immensely for BN to seize back power, Hamidah have not been on a good run lately.

She was supposed to be the Wanita candidates for Majlis Tertinggi.

Strangely, as the UMNO election draw near, she realised the race is crowded and something does not feel right. She changed her plan and applied to ran for Naib Ketua Wanita.

Then came threat and aggressive persuasion to get her to withdraw. Someone else was planned for the position. Hamidah is more known and popular among the Wanita UMNO grassroot thus she could win instead of the intended one. 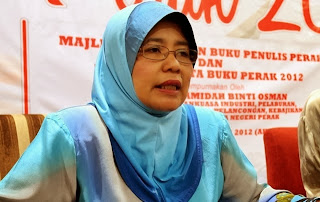 Her gut feel was right because something was brewing at the Division.

Last weekend, the candidate list she promoted for position and as Divisional delegates made it but strangely she was single out to lose her 15 years leadership as Ketua Wanita Bahagian Gopeng. To the surprise of many, she lost to the former Ketua Puteri.

Puteri UMNO movement had been on a decline following the vacancy left by Dato Azalina Said and under Dato Rosnah Shirlin, it lost the respect and became directless and ineffective. Thus the reason one find too few former Puteri UMNO made it in the Wanita ranks.

The same in Gopeng.

What made the Wanita delegates ready to betray her?

It turned out the Ketua Puteri was heavily financed by businessmen close to a certain top Bahagian official. Talk was it was raining gold and silver on the night before the poll to dissuade delegates.

The someone is actively doing behind the scene work to determine whose who in many cai from Division all the way to the top positions. Most delegates have limited knowledge on whose who to vote thus suggestions from above in the form of cai is seldom adhered to.

At least, the number of ballots CANNOT be more than the number qualified to votes. Some votes look like a color copy of the ballot paper. There is a an official protest from Hamidah. 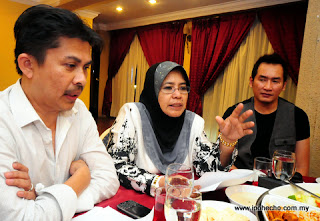 In the meanwhile, she soldiers on.

Hamidah is still sticking to the plan to risk her head in the crowded Majlis Tertinggi. After what had happened, the odds is stack against her. She is clearly an underdog and could lose. If she does lose, it will be a big lost to the party. UMNO will be seen as a party with too many betrayals.

UMNO does not need more Yes man and woman in the Majlis Tertinggi, but selfless souls like Hamidah ready to struggle and toil for the party on the ground. Any Hashimah can be Yes woman. And any Azizah can just follow instructions.

Hamidah's presence in the Supreme Council will be that of a sincere and brave voice able to provide right and honest feedback from the ground and women perspective to the highest leadership.

There is this feeling that there have been a sinister plan to end her career to stop her vocal, brave and confrontational ways. At one time, her name was being bandied to be replaced with Dato Kamelia Ibrahim as state exco. Kamelia blew it by insisting to run for the Kuala Kangsar parliamentary seat. She lost badly and got expelled.

Hamidah could be rather gung ho in her ways but she is an able public administrator and has a good  grasp of public office. She applied her past experience as accountant of a mining company and made the lesser experience one sweaty in their collar.

There was even an intention to fix her with corruption but there was no case.

Some coward up there must be thinking that BN cannot attract the Chinese votes with Hamidah around.

Naturally, Hamidah is high on the DAP hitlist to avenge the lost of Perak. They quietly shifted thousands of Chinese to her constituency. But, she could still made it if not for a directive by the division head to sabotage her.

That sabotage continues till today. 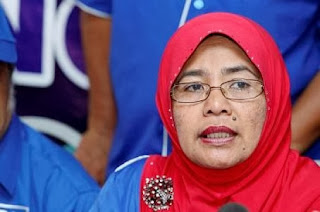 The sad part will be that Hamidah, like other past leaders of UMNO that contributed and sacrificed immensely for the party and it's struggle, will not be appreciated and even vilified. It would be a waste to send her to the UMNO graveyard of used leaders.

UMNO leaders' attitude or UMNO feudel politics tend to not appreciate the contribution and sacrifice of past leaders. The new crop of leaders tend to not give respect to seek their elder's feeling and opinion. They ignore and disrespect the elder family member.

Such attitude and act made the likes of Tan Sri Muhammad bin Muhamamd Taib to leave the party for the opposition PAS. They usually justify their disrespectful act by saying "itu lain bab, ini bab baru."

The culture to respect the elder ones and love the younger ones is waning. Is it Melayu or UMNO "yang tidak tahu mengenang budi"?

Maybe and hopefully there is this oft chance of a realisation among UMNO grassroot delegates to stem such migration and premature demise of their leaders and fighters.

Hamidah is at the right age and experience, has the right attitude, and brave. Compared to quite a few of other Wanita aspirants, older or even younger than her, Hamidah has the vigour, more energetic and dedicated than most of them.

Agree with you. Umno has already become Malaysia biggest pyramid scheme. Either you are with the leader or you are out or worst if you are at the bottom .....

Its a problem with the malay.

Too stupid to learn and to acknowledge.

Many who join umno, do so without the sacred knowledge of why it was formed.

And the malays are never one that are too bright. Always mid carders in many aspect.

But the ones who are higher ceiling mid carders are always acting like big fishes albeit in very small ponds.

These are the type who wither away in front of the white man in humbleness but will no doubt stick knives and dagger into their fellow comrades.

So until the malays buck up, open their eyes, learn and acknowledge that the malays in the majority are just midcarders, we will not see an improvement.

Unless a figure like tun m comes along. But i think god was just kind. Maybe 1000 years once sort of kindness.

It horrors and mortifies me looking at my own kind who are supposedly top echelons.

Er, what is so different than standard U M N O operations?

Btw, if MM loses tomo, I heard that MI will toast his defeat as meaning the end of Mahathir's political dynasty

THE UNITED MALAYS NATIONAL ORGANISATION BARU IS A PARIAH PARTY.
ANYBODY U MARKET,ADVERTISE,PROMOTE,SELL N SERVICE IS A PARIAH OF THE HIGHEST ORDER.
BUT WHO CARES RIGHT?WHO REALLY CARES?
it is easy to talk n write intellectually.it is easier still to say =FUCK U GUYS=