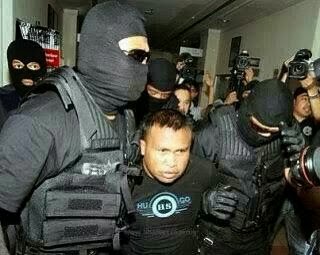 On October 23rd, a security guard at an Ambank branch in USJ, Subang shot and killed a Bank officer, Norazita Abu Talib in a murder and robbery. He fled with RM450,000 from the Bank's vault.

The murder shocked the whole country because the security guard that is supposed to safeguard the bank was the armed robber itself. What was surprising is how an Indonesian immigrant worker could be hired and armed by a security company and assigned to a Bank.

By November 10th, the police managed to catch with the alleged security guard in Johor Baru. By the look of things, the issues raised had died down and soon everything will be forgotten.

The security guard will be dealt with but another perpetrator will scot free. And that is the Bank itself.

There is supposed to be a minimal wage set by the Ministry of Human Resource for security guards at RM900 and when include the logistical cost, management cost, and benefits like Socso, Insurance, medical, leave, etc., it adds up to slightly more than RM2,000.

However, it seems the major customer for security services, which is the Banks refused to adhere to the rate set. They wanted a rate of RM8 per hour per security guard.

The security companies could just refused the business. According to sources, the Ministry of Education also, by coincident or in collusion with the Banks, insisted on a rate below the minimum wage set by Ministry of Human Resource.

Since most of our Banks are owned by Government institutions, it means Government are not giving due respect to the Ministry led by MIC's Deputy President.

The security companies had no choice but to find a way to cut cost. Like every other businesses in Malaysia in need to cut cost, they hired cheap foreign labour.

Only problem is Home Ministry are strict in hiring of foreigners. The only foreign security guards allowed are the famous Gurkhas from Nepal. They probably cost, thus one find Indonesians finding their way as security guards of our Banks.

That makes Banks and Education Ministry and extendable to the Government as indirect accomplice in the death of Norazita. They did not have intention to cause her death but their penny wise attitude had cost the life of a staff.

The family of Norazita should sue the Bank for being negligence on security. Even winning a couple of millions will not replace the children's loss of their mother. The highly paid top executives and managers must be made to pay for it.

totally agree, the family should sue the bank!!

I don't see any issue wt ministry of education...at rm7.20 per hour they are paying now...the security company claimed around rm2500-rm2600 per month for one guard.enough to cover the minimum wage,overtime, epf socso, insurance, GST etc with a decent 12-18% profit.

Except for the contract issued before jan 2013.But I believe they are reviewing the contract for price adjustment.

But for armed guards...rm8 is way too low...I don't think any experience local will work for anything less than rm2000 per month.that was why they end up hiring foreigner or retires

Who owned almost all the security firms. None other than UMNO cronies and parasites. In their greedy motives to make more and more money, they are willing to compromise the very objective of what security is all about by employing any donkey and monkey to act as security guards.