Will PKR repeat the history of Semangat 46? 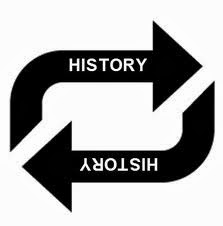 History always repeat itself. Thus the existence of such a term called historical cycle.

Past sequence of events have a tendency to repeat itself. If not the same set of events occuring, it would be similar events or at least, the broad underlying trend is the same. This cycle is qualitative in nature as against quantitative or exacting trend.

Understanding historical cycle has it's importance, thus Edmund Burke's quote, "Those who don't know history are doomed to repeat it.”

What we are getting at is the emerging of a political trend. It is in contrary to the confident belief amongst pro-opposition supporters and pessimism of certain segment of pro-BN supporters against it's leadership.

If the past events of Parti Melayu Semangat 46 is a historical cycle, an emerging trend indicate PKR replicating it. 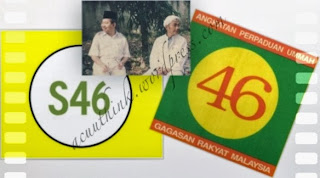 Semangat 46 was a political party established from the aftermath of a challenge by Tengku Razaleigh-led Team B faction against Tun Dr Mahathir's Team A in the UMNO party election of 1987 which resulted in UMNO being declared illegal.

Team B immediately tried to register a new party known as UMNO 46 with the intention to replaced the legally defunked UMNO but was rejected by ROS. Subsequently, they re-registered as Semangat 46 under which Team B regrouped.

They came out of the 1990 general election with only 8 out of 180 seats in Parliament. However, APU swept all the 39 seats in Kelantan from Barisan Nasional.

Over the next few years Semangat 46 lost support as many of its members, including Youth Chief Ibrahim Ali.

Before the 1995 general election, relationship with DAP deteriorated, which led to the breakup of Gagasan Rakyat. Power sharing relationship with PAS in Kelantan also increasingly strained ties. Semangat 46 ended up losing more seats with only six parliamentary seats and lost many key figures like then Dato Rais Yatim.

By May 1996, Semangat 46 was greatly reduced in size and influence. Razeleigh was worned out after spending millions for the up-keep of the party and Seangat 46 was disbanded. He rejoined UMNO with most of the party members.

Read in Wikipedia here a fair brief history of Semangat 46

Initially, Parti Keadilan Nasional was replicating the way of Semangat 46 and was left with only one seat in Permatang Pauh, However, it found a new energy with the release of Dato Seri Anwar Ibrahim from prison and rebranded itself into Parti Keadilan Rakyat (PKR). 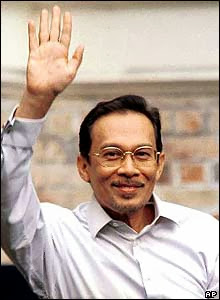 Despite less number of exco members, Menteri Besar of Selangor remained from PKR unlike Semangat 46 which was merely given the post of Deputy Menteri Besar II for Kelantan then.

Dr Mahathir managed to tightened his political strength and public popularity, while Dato Najib is struggling with his governance, transformation, and perception. The freedom given by Tun Abdullah and more leeway given by Najib creates a totally different background.

However, Murray Hunter observation in the Asia Sentinel to saw PKR as beginning to lose it's lustre.

One is talking Asia Sentinel, which was a strong critic of BN government and working with PKR and SUARAM to prop up the allegation of corruption and murder in the purchase of Scorpene submarine.

As far as the achievement made in 2013, Murray see:


... PR doesn’t have the pedigree needed to form a federal government, given the existing inconsistencies and weaknesses. As a multi-dimensional party, PAS doesn’t speak with a unified voice, given its divisions between the fundamentalists and the so-called Erdogans.

The DAP has shown its failure to provide ideologically sound and loyal candidates for political office, causing the downfall of one state government. The coming DAP party election in Penang shows the mad scramble for positions of influence among party stalwarts.

To date, PKR has shown itself to be opportunistic, with very little in the way of its own thought-out ideological based policies. In fact some of its views like the one on salary hikes for politicians are even contradictory.

Despite expectation of further losses by BN, Najib managed to hold off the on-slaught. He held on to Terengganu and Negeri Sembilan, and took back Kedah. Murray saw:


The taking back of Terengganu from PAS in 2004 and the recent return of Kedah to the Barisan Nasional indicates that voters won't accept incompetence by any Pakatan government.... 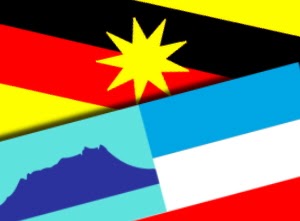 PKR also made serious blunder in Sabah for:


... wanting to run candidates under its own banner rather than work with the existing opposition forces in the state, leading to a number of three-cornered fights.

PKR is still facing the aftermath of that blunder. Thus far, 2 state asssemblyman and 11 division heads left PKR to support BN. More is heard to come.

DAP had called upon PR to make inroad into Sarawak hinterlands, but they will make the same mistake as PKR in Sabah to believe in their own propaganda and underestimate Pehin Seri Taib Mahmud.

PR cannot make much gain into Sabah and Sarawak till they:


"... change its understanding of the political dynamics of both states. From the rakyat or people’s perspective this may be even more difficult as PAS, PKR, and DAP are considered by many as peninsular centric." 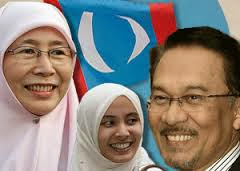 Further more, PKR is beseiged with the perception that it is:


... a dynasty with husband, wife, and daughter holding high profile positions. This is one reason why the Azmin Ali influence is so strong within the party, to the point of being bitterly divisive....

There is more to Azmin Ali's antics than just naked ambition.


"... there was too much central control. This is a rift that could paralyze the party, particularly when the rank and file membership are needed on the ground during elections.

The current disagreement about how funds in treasury funds in Selangor should be utilized show the policy malaise of PKR. There is also a wider dimension to policy issues where the PR has not been able to deal with the issue of hudud, or Islamic law, and an Islamic state...." 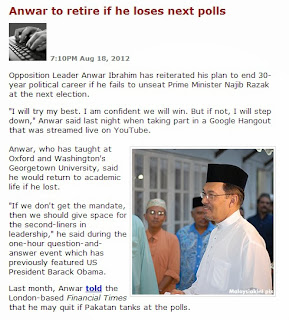 Murray see PR will remain as opposition unless something drastic is done:


"... time for the PR to eradicate ego from the coalition leadership and make a serious attempt to regroup under a new guard for the next election. To do that would shed the usual to allow a new vanguard of Malaysian politicians to emerge who are younger and more energetic than the Barisan."

It means Anwar has:


"... to declare that he had no more ambition to become Prime Minister and stand aside".


"...Many perceive Anwar to be driven by ambition, hate, and a sense of revenge. His pledge to retire if PR didn't win the election has lost him credibility.

There is a segment of the population who have become disillusioned with the opposition over a number of issues. Anwar's antics, internal struggles, a potential political dynasty, lack of policy direction, and basic mistrust is keeping the PR from winning the federal elections. If the PR wants to win, they must take a hard inward look, rather than blame their loss on phantom voters."


"In politics it doesn't matter what foreigners think of the present Malaysian government, or Anwar Ibrahim for that matter. It doesn't matter whether there is electoral fraud or not. Elections are not about the moral high-grounds or even what the majority wants. What matters is knowing the hand you are playing and winning the competition by the rules that exist. Otherwise a tired and scandal-laden government would have long been tossed out of office.

Unlike the post 2008 election period, the Malaysian electorate appears to be "burnt out" and has given up expectation and yearning for change. It's now very much suppressed. ..."

Read in full in Asia Sentinel

The Malaysian electorate looks "burnt out" and given up their expectation and yearning for change.

This is where Najib and BN can make up make up for lost ground in the next general election because "the wave of change has reached the peak and will gently subside." 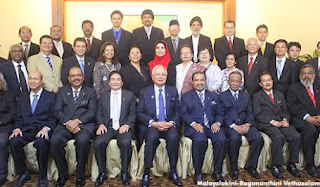 As Helen Ang saw it, Najib is heading for Plan B [Read her here] and it looks like he is playing to the gallery of the left wing, liberals, and fringe groups. Is he willing to sacrifice the support which saved him in 2013?

Or, he see them staying with him despite their frustrations?

Already the recent party election have not met the expectation of these segment of supporters and voters wanting change in the party.

While the new electoral system allows for wider participation, it was marred with manipulation and tampering. The results was expectedly in accordance to a cai or secret list prepared by "upstairs".

Before this, they were disappointed with Najib's general election candidate list, cabinet appointment and other appointments in party and government.


Government's structural measures will see shock in the system that will slowdown the economy and squeeze the budget on the ordinary folks.

Subsidies rationalisation policies involving sugar, fuel and soon to be energy deemed necessary to avert a financial crisis has resulted in drastic rise of goods and cost of business. Coupled with an impending clampdown on easy credit, it will squeeze the budget of consumers.

PR will take to streets on GST planned to be introduced in 2015 to broaden government's tax base.

When it comes to communication and dispelling psywar attack from the opposition, the government side lacks idea and ability to act fast.

These could be the bases for the confidence of PKR's supporters who are already beaming with the belief that younger profile voters will be on their side. However, it will not help their cause should Anwar stay on. Hear this lampooned video below:


Contrary to the popular thinking among the hopefuls, it is not impossible that PKR will come out of the 14th general election in the same situation as Semangat 46 in 1995.

To seize the opportunity, Najib has to fulfill electorate's expectation for change and get the economy growing again to put money in the people's pocket.

If anwar stays on..? What about if najib stays on? The young really do hate him but what about the guys who've been around?

People are seeing najib for what he really is and he is a conman. Pr will not win the ge thats for sure but is that a good thing or a bad thing? Najib the conman and his fat wife will still be around?

We need a stone that will take care of 2 assholes at one go. Umno is losing relevance. So many old guys in there who are power hungry and are doing viagra. Let the young ones who can get their cock up without the blue pill have a shot najib you loser

Semangat 46 troublemakers are still pretty much at large in UMNO.

They have no influence but poking from all sides without a clear objective.

Still dreaming for Ku Li to be PM

I hope so PKR will follow Semangat 46's footstep. History tends to repeat itself is so true.