Nation building: PKR and Pakatan have no plan 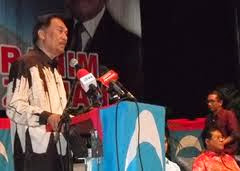 Stumbled on an interesting article on Free Malaysia Today. It relates to an agenda which current government seemed presumptously think it is doing so but in some aspect have negated past efforts and taking strange direction.

While Pakatan thinks that is what they are doing but they are not.

It is not on the right path when they cannot put politics aside and unite on matters of national or public interest. They think they are protecting national interest by imitating Mahathirism in fighting TPPA but they could be anarchic to heartlessly politicise flood rescue effort and insidiously try to create chaos and distrust on rescue effort.

In the discussion Will PKR repeat the history of Semangat 46?, the absence of consistency and blunders of PKR and Pakatan Rakyat was delved into to show they are not credible government in waiting.

Despite their accusation of BN, do they  have the bigger plan and direction for the nation bigger than the factually wrong Buku Jingga? Rakyat should ponder whether they actually have one when they can't register Pakatan rakyat as legitimate entity and resolve the ideological clash between DAP and PKR vsi-a-vis PAS.

Since its 2008 historical sweep into the political forefront and its retention of two key states – Penang and Selangor - in GE13, the Pakatan Rakyat coalition has done doing but gripe, claims a NGO.

GEORGE TOWN: An NGO here wants answers and a national development floor-plan from Pakatan Rakyat, which it claims has done “nothing”  todate except criticize the Barisan Nasional government and tarnish the country’s reputation abroad.

Sensible & Ethical Malaysian United Team (Semut) president Huan Cheng Guan said that for every criticism hurled against the federal government, Pakatan was neither innocent nor blameless in not committing the same actions its leaders condemned.

“For all their criticisms at the federal government, has Pakatan proposed any concrete ways to overcome problems highlighted?

“Pakatan does not have a good record securing foreign investments on their own without riding on BN efforts.

“ Have any of their leaders ever praised or promoted the country locally or internationally in speeches or social networking platforms?

“Pakatan have never assured Malaysians or foreigners that the country is a fantastic place to live and to invest, “ he said in a  statement yesterday..

Huan said that since 2008, Pakatan was yet to produce a shadow cabinet to provide the much needed check and balance and prove their leaders can be better than BN leaders.

All they seemed to be doing is  complaining, ranting and disgracing the federal government on corruption, wastage and other issues, he said.

“Malaysians are keen to know what Pakatan has done for the country as a whole.

“Picture this scenario.  Two opposing factions declare their allegiance to their country.

“One works to develop the nation positively although not perfectly, while the other consistently runs down the country locally and abroad supposedly for the rakyat’s sake.

“Internationally, the nation’s prestige is on the downward trend. Many conclude that things are not well on the home front.

“So whom would you trust?” asked Huan.

Huan claimed Pakatan had a poor track record on paper despite the successes of two states – Selangor and Penang – and was hoodwinking Malaysians into thinking that it was doing all it can for the country.

“(Seriously), Malaysians must think about what Pakatan has really done for Malaysia,” he said.

Thus far Pakatan, he said, had only put forth a  roadmap for Malaysia’s destruction.

He listed down the unproductive and unruly Bersih rallies and unproven allegations of foreign voters during the 13th general election and PKR de facto leader Anwar Ibrahim’s alleged claim of 40,000 Bangladeshis who voted in the elections.

He also slammed DAP secretary-general and Penang Chief Minister Lim Guan Eng for condemning the country in Hong Kong a few months ago.

Referring to the RM7 million-contract given to SP Mega Sdn Bhd by Penang government for a flood mitigation project, he said it showed that Lim’s much touted principles of  competency, accountability and transparency (CAT) was merely a political slogan to deceive the people.

“Pakatan leaders have nothing good to say about the federal government and country.

“What is really their motive?  Is it to develop Malaysia or to develop their agenda by putting this nation on a path of destruction?” asked Huan.


For that matter, it is also not just the political party that have to be asked.

The rakyat have to ponder on where they want the nation to go. By the look of things, majority of the rakyat are inconsistent, contradictory and indifferent. Only a small fringe group of vocal minority is trying to dictate the direction of the country.

On matter of corruption, the rakyat talks and express their disgust but they themselves are gutless, driven by self interest and not helping to the cause to fight corruption.
at 12/09/2013 11:30:00 AM

In Malaysia, the only coalition that is capable of running Malaysia Government is Pakatan Rakyat.

3 Easy Steps to Putrajaya power which the Opposition failed to take.
1. 1998. If the Deputy Prime Minister took a holiday in Disneyland with his family, he would have returned as the Honourable Prime Minister of Malaysia and those events which happened after would not have arisen.
2. 2008. If the Opposition had sorted out the 32 seats before the 12th General Elections, they would not have given the 32 honourable gentlemen a holiday at Peitou, Taipeh, Taiwan.
3. 2013. If the Opposition booked the 1st Class Ward of the Kuala Lumpur General Hospital for a 100 day hunger strike and boycott the elections. The BN would have won 100% of the seats with 49% of the popular votes and subjected to world-wide condemnation. The Opposition would be in Putrajaya by now.
The Opposition might as well join the BN as led by the UMNO with the 13 component parties, separately as the Singaporean Trojan Horse DAP, the very rich PKR and the pious PAS.

DAP-PKR-PAS: it's an unholy alliance that blows an ill-wind upon the rakyat

Men are revered by what they contribute to the good of others, not by the persuasive promises that ring hollow!