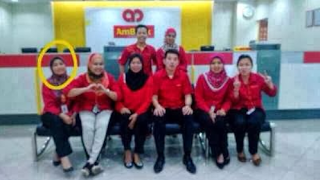 The above picture is Norazita Abu Talib (circle in yellow) with her Ambank collegues at the USJ branch, Petaling Jaya.

In case the Home Minister, Dato Dr Ahmad Zahid Hamidi had forgotten, a gruesome picture of her head split apart with blood splattered all over from a point blank shot by a foreign security guard would remind him.

But, that is disrespectful for the decease but it seems Zahid's Ministry is ignoring a problem raised before in this blog about the underpaid fee paid to security companies by government ministry and companies.

This in turn resulted in security companies hiring foreigners with unknown security background hired for cheap from abroad. Ministry official denied foreigners are allowed to work as security guard. 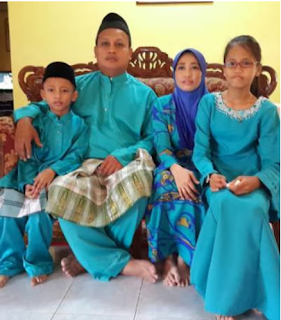 But the undeniable reality is two children lost a mother. Ahusband lost a wife.

That is hardly two months from the October 23rd incident and yet the public also forgotten the incident. Maybe it should help to ring a bell because the alleged murderer was only captured in Johor Baru on November 11, slightly more than a month ago. 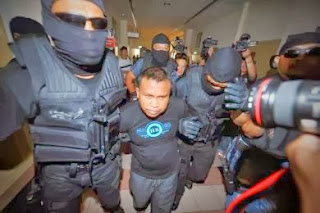 The IGP announced to the public that Team Ops Cantas from Bukit Aman successfully captured the  the alleged murderer.

Hmmm ... Team Ops Cantas was merely photo ops. That is why they are too shy to show their face to claim credit. Some other group should be given the credit but they shall forever be unsung heroes that is regularly villified by some MP.

Hopefully the Home Minister and public is reminded because what the duck are foreigners are still allowed as security guards? And, why the requirement is only competency course in Bahasa Malaysia?

KUALA LUMPUR: Passing a Bahasa Melayu course is among the conditions enforced on foreigners working as security guards next year as part of a move to boost the national security industry.

Deputy Home Minister Datuk Dr Wan Junaidi Tuanku Jaafar said Tuesday that those who failed would not be considered for a job as a security guard.

The improvement was based on a study, which also involved the implementation of a new mechanism to audit all local and foreign security guards in the country, he said in the Dewan Negara, here.

He was replying to a supplementary question from Senator Datuk Boon Som Inong who wanted to know the government's move to overcome communication problems with foreign security guards in numerous sectors in the country.

There are about 300,000 local and foreign guards in the country.

Replying to another supplementary question from Senator Khairiah Mohamed on the background checks for security guards, Wan Junaidi said a new system, Agency Link Up System was implemented recently.

"We can find the individual's name, photograph, finger prints and all his particulars through the system. Otherwise, it means the security guard is not a citizen or using false particulars," he said.

Replying to the original question from Khairiah on the giving of firearm licences, Wan Junaidi said: "A total 138 security companies were given licences for pistols (806) and pumpguns (10,712). - Bernama

Looks like the Minister and Ministry have lied but what happen to police or millitary or similar experiances? Government official and politicians tend to forget and never learn from past mistakes but within two months?

We have so many retired army & police officers that can do with reasonable income as security forces.
What? Their experience too expensive? Go get foreigners! No experience required. Just pass BM test