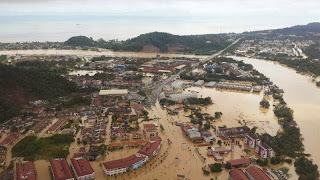 Few pro-opposition friends alerted us of Nelson Mandela's death. Malaysiakini titled their MySay column today as "We M'sians needs our own Nelson Mandela".

As one, who lent a hand to a fellow South African Malay in Mandela's anti-Apartheid movement in our varsity days in New York in the early 80s, reading their self thumping rhetorics and cheap political propaganda makes us feel like puking.

How are they to talk of Nelson Mandela when these Pakatan supporters could even immorally politicise the flood in Trengganu and Pahang and working to create public unrest through the slanders of their leaders and cybertroopers?

Our Malaysian Chinese friends studying with us then were indifferent to the anti-Apartheid cause because of selfish reason. It does not concern them.

Even if we are wrong for stereotyping and generalising, so be it. These Malaysiakini's comentators are mostly Chinese and our past experience does not convince us they are true to the cause of humanity. With the exception of the few, it is a matter of time their true self-serving, selective and hypocrit self will kick in.

They should not try to attempt to ride on the name of Mandela and be associated to him. It only bring disgrace to the great man.

For instance, DAP never bothered to condemn act of violence, violation of human rights and force evacuation on Palestinians by Israel, Americans, and the west.

In our days working in the private sector, our Chinese colleague complained whenever Tun Dr Mahathir made any critical comments on the west or Israel. Their psyche is predictably that we mind our business. To them, why bother over our Muslim brothers or injustice on the rest of humanity.

Obviously, there is self interest at play. They behave differently when it involves overseas Chinese and defend Singapore to the hilt.

These Pakatan people are full of inconsistencies and self interest that they know no bound in their politicking. By the way, no DAP is seen showing sympathy for flood victims in Terengganu. WHy should they be sympathetic with the 93% Malay state? 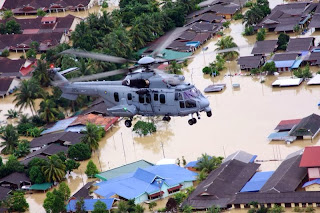 This morning a friend shared with us an SMS he received from a Health Ministry Official and we share it below:

Apa yg mengharukan, ada our staf dalam menghadapi rumah mereka dan klinik dinaiki air, they choose to selamatkan harta kerajaan dulu, to me the highest level of public servant integrity manifested by the majority, despite being rediculed of late by laporan audit.

We had anxious time too when 3 staff, a young female doctor, MA and Staf nurse, on boat trip to affected areas, when missing, and did not returned to base. The MA in one boat, having engine problem and having to anchor and sleep overnight in the rain on the river bank.

The MO and SN in another boat actually capsised when their boat langgar talian letrik yg tengalam (imagine the water level in that kampong). Mereka diselamatkan oleh life jacket yg mereka pakai bila tersangkut di dahan pokok when they were pulled by the strong current towards the fast flowing river. They hanged on to the tree until another boat came to their rescue and brought them ro an abonden store and slept over night in the wet.

The search and rescue team sent the next morning did not found them, instead they went back in the other boat and walk to the hospital to the relieved of colleague.

My tears almost free flow when i met them, they were all ready for the next call of duty willingly!!!

Indeed i am very proud of my unsung heroes out there, not just in this incident and in many2 situations before, including during Lahad Datu and Semporna emergency. Lets us all pray to all our front liners."

Talking about unselfish act, a friend in Terengganu sent a picture of the home of a policeman in his neighbourhood. 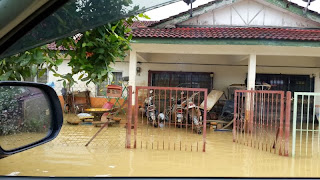 The policemen in Kemaman had been unselfishly serve to help the relief work since last Monday that he had no time to take care of his own home. He left it to his neighbours, friends and relief workers to take his family to safety. His car is underwater.

Given the situation, it is seriously unfair and insensitive of bloggers and opposition leaders hurling accusation at government and rescue effort. The flood is larger than usual, thus some discomfort and delay can only be expected. However, we should thank Allah that the number of death is minimal.

We were in Kuala Terengganu since Monday and was trapped in Kemaman in the midst of our field work. The relief effort was already on-going from Monday, day 0 of the crisis.

Before we left for Kemaman to do our site visits, relevent authorities were already on red alert and relief work were already in operation. In fact, we were alerted on our way to cancel one of our schedule visit in Kemaman due to rising water level.

From that experiance, the claim by PAS state assemblymen for Batu Buruk, Syed Azman in Harakah [read here] that the state government was slow to response is an absolute lie and badly intended.

As Pakatan Rakyat's first salvo against the government, state and federal, and relief effort, he accused the Menteri Besar was more concern with the UMNO Annual General Assembly then attending the flood.

Terengganu Menteri Besar, Dato Ahmad Said had returned from a trade visit abroad and went down straight to visit flood victims the next day Tuesday and accompanied his highness the Sultan.

A day earlier, Member of Parliament for Kuantan Fuziah Salleh, who had not visited her constituency but comfortably cosying up in her Bangi home in the 2012 flood, was trying to pull a stunt for attention in Parliament a day earlier on Monday:


Her lie was obvious.

How could someone with water level at their neck be trying to call her using their handphone? They should be saving themselves rather than call her. Furthermore, their handphone would logically not be useable due to the water. 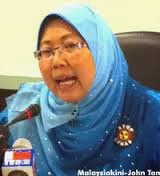 If truly there are no boats, police and JKM helping out, why are there already 4,000 evacuees at relief centres at the time she was pulling her stunt?

Instead of returning to her constituency, which she only did the next day after getting snubbed by YB Dato Bung Mokhtar for not returning immediately, she was trying to gain political mileage.

What is the purpose of proposing for an emergency when the whole relief effort are already on emergency mode?

No need to ponder further. Embarassed by the expose on her Lynas lies, Fuziah campaigned for a resolution to the Kuantan flood problem.

A video was prepared to reply to Fuziah Salleh, below:

She did documented her visits for the next few days in her Facebook but it looks more like photo op and mostly posing for the camera to be seen than actually helping out.

Generally, the opposition machinery were visiting victims to find fault rather than putting aside politics to help out. They were spreading lies, slandering the authorities to create distrust and adding to the chaos. 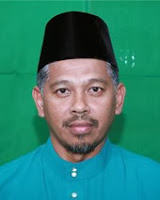 Taking the lead from these two yobos, PAS state assemblymen for Chukai, Haji Hanafiah was also making blames on the relief efforts.

However, unlike the health worker and policeman, he had the benefit of saving himself and his family before his constituencies. One can see through it in this dramatised report by PAS portal here.

In addition, the report published only Friday was playing politics as he accused BN leaders was not seen at the flood site. The BN leaders had been down and soiling themselves since Monday.

Their Sunday report here made falsified blames against the police, JKKK, JPA, fire brigade, etc for not sending help when pictures and reports are abound.

Taking the cue from their leaders, the Pakatan supporters were irresponsibly spreading lies upon lies upon lies. The Unspinners here reported the slander, below: 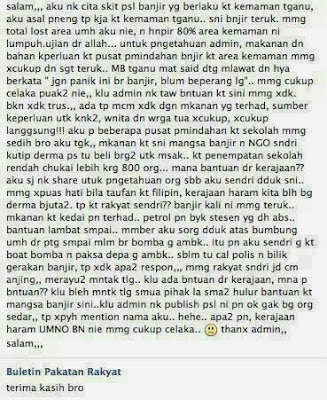 The slanderous message could not even try to be realistic and could not mention the name of the school Sekolah Menengah Banggol Paya Berenjut where the MB was present to help out.

At a time the relief workers were tirelessly working with such dedication, PAS volunteers were visiting relief centres to find materials to create slander to irresponsibly cause further chaos. 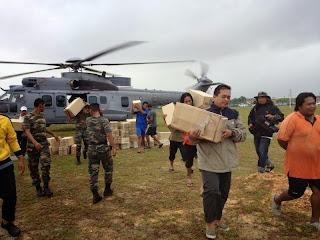 The  community and relief workers were all out working and cooperating smoothly. It is PAS's Unit Amal that are obstructing effort by the traffic jam nuisance they create. PAS's relief effort was purely for politics.

When bloggers shared the incident of the Menteri Besar himself personally got Gardenia to distribute bread to flood victims and wnet to Giant Kijal to buy milk for children, PAS propagnda machine accused him of robbery. 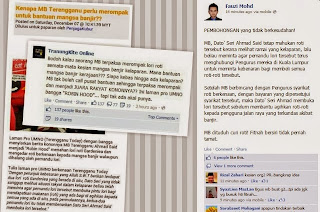 In the meanwhile, PAS social media machinery were spreading fear through their facebook and twitters. 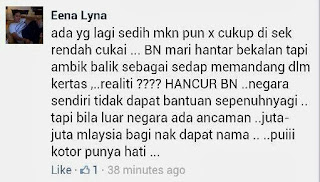 In the messages above, they claim no food are available.  But where? 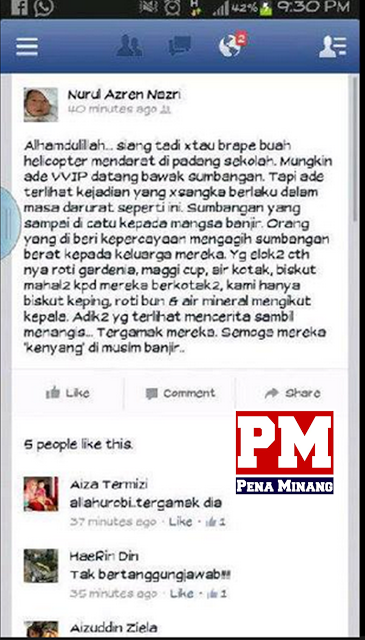 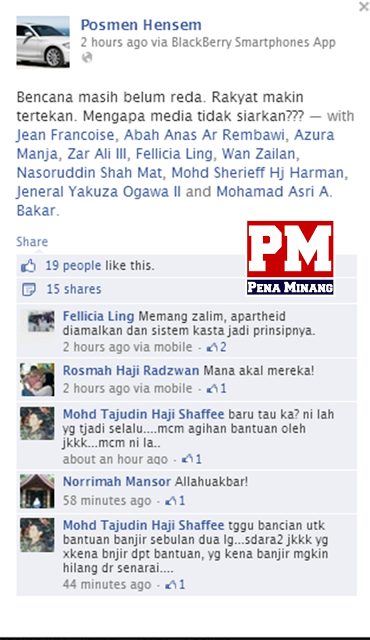 Before they start to pick on Dato Shahrizat Jalil for lambasting Fuziah, remember that they fired the first salvo. As usual, BN leaders were merely responding. The blame is on Pakatan for politicising the flood.

There is a saying "All is fair in love and war", but we disagree. There must be a limit to everything.

After election, Senator John McCain and Senator Joseph Libermen could put aside their politics and party to show a united front when they visited us in August. [Read The Star here.]

Americans have demonstrated their ability to cast aside politics and be united as a nation on many occasions like the 911 incident, waging of war against Afgahnaistan and Iraq, and most recent the power blackout in the northeast.

But we have the likes of Nurul ridiculing our submarine could not submerge. Anwar spent all his time overseas to discredit the government without realising the criticism he place on BN will come back to haunt him if he ever become Prime Minister.

Why can't we be more mature in our politics? At least, work together for the people sake in the event of needs.

Even in the face of natural calamity like flood, opposition politicians insist on getting political mileage for themselves to the point of willing to sabotage the people's comfort.