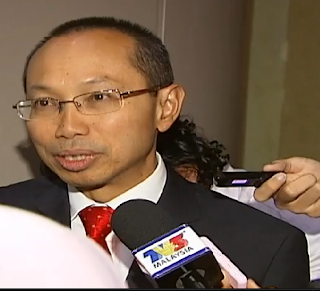 If we had chided Dato Abdul Wahid Omar for being overzealous to please Rating Agencies, but this this time we will defend Wahid for the unfair spinning by intentionally misreporting by The Malaysian Insider (MI).

MI manipulated the sentiment of the public which had been rather edgy with price increases lately to misreport Wahid as though saying he defended toll hike and road user could use other roads. That set up an Internet explosion of critics from both side of the divide and mainstream media.

After having made apologies many times for wrong reporting, when will they ever learn? Someone should teach this MI a lesson, JLho or yes. 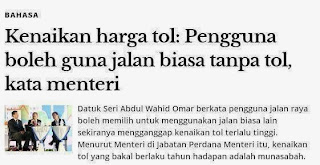 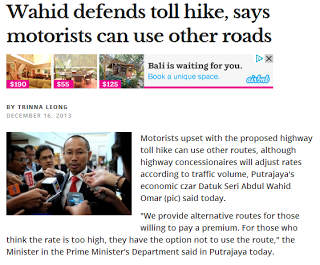 As Rocky Bru highlighted here, Wahid did not say those words. Many pro-UMNO bloggers and an UMNO youth leader also had jump on him too fast.

To quote Rocky, "the Minister was asked the question yesterday afternoon, after the ETP progam at PICC in Putrajaya, about FUTURE tolled road concessions to be given out, NOT EXISTING tolled roads which are already bound by existing concession agreements.  and there is no toll hike have toll free consumers since the subsidy cut on fuel and sugar, and an impending hike in electricity." 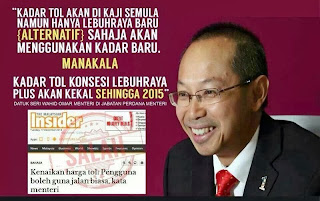 The truth to the matter is there is no plans for a toll increase and MI had misreported on Wahid. PLUS Managing Director explained that there is no toll review due for the next few years. [See the TV video here,]

In fact, she mentioned that there are plans to restructure the toll rate to allow some 10-50% saving for road users. An extract taken from The Unspinners here below:

We are trying to locate the original source of that report but it is not far fetch. [Found! Here and in English in PlusMiles.com.my]

Since taking over the position of Prime Minister, Dato Najib was aware of the implication of rising toll on voters' sentiment against government then. He has been looking at ways to lessen the public transport burden. 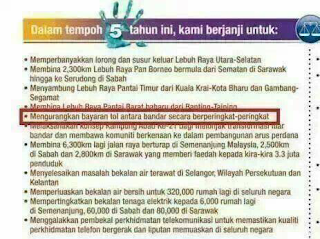 However his measure fall short to only on city toll. It was stated in the BN Manifesto.

Wahid could be taken in to help resolve the issue. As former Managing Director of UEM World, he was involved in the restructuring of UEM upon the takeover by Khazanah from Tan Sri Halim Saad via Danaharta.

Wahid should have familiarity with the various privatisation agreements. The more familiar person is Dato Zaid Ibrahim who benefited immensely as lawyers for UEM and was involved in the negotiations and drafting of agreements.

Before the public place blame on the past privatisation program, JKR does not have neither the management skill nor expertise to project manage the pressing need for a North South Expressway. The only way possible was to copy and ride the privatisation wave started by Margaret Thatcher.

In those days, the only privatisation financing model available were the ones from British Banks.d Most of our Merchant Bankers learnt it from the likes of Barclays, NM Rothchild etc.

To do it through government, it would be bureaucratic and slow. It may even require passing of various legislatures. The exercise had to be done through privatisation and subsequently the use of  public listed vehicle.

Since the government cannot tahan on the subsidy bill and covering up for shortfall, many are anticipating a tollhike to come. MI conveniently manipulated the public sentiment.

Hike or not, Najib should not abandon his plan to bring toll rate down.

If he cannot do anything with fuel subsidy cut which is intertwined with subsidy for IPP (cutting it means electricity cost hike), then consider a government nationalisation of PLUS.

After all, the right hand and left hand are still government but the consumer are rakyat or voters.


Forget about shareholder Khazanah, the controlling shareholder of all toll concessions.  Transfer it for RM1` to MoF or some foundation meant to reduce the rakyat's transportation burden. Or wait out till 2015 .

Such privatised entity under Khazanah only made them lazy, unproductive and complacent rent-seekers. Under leadership of Tan Sri Azman Mokhtar, Khazanah has been transformed into a mere Fund Manager seeking paltry bread crumbs of few annual percentage return.

In other words, Amokh is merely riding on the effort of empires build by past corporate players and then steal it from them.

For that, one do not need a CFA. Dato Ramli Yusof, and Rosli Dahalan could do it with vocal support from Tan Sri Robert Phang, blog spinning by Din Merican and Raja Petra,  and concocted lies by Dato Mat Zain Ibrahim.

Neither serious new businesses created nor strategic investment for future economic sectoral growth made. The important and strategic food security program should be taken up by a government entity like Khazanah.

Unfortunately they failed in too almost all their food related ventures that simply task of catching tuna in the sea too failed miserably. It had to be tasked to Sri Syed Mokhtar to undertake.

He has mdae Khazanah into a skull and dagger secret organisation of old boys in which the public does not what the hell they are doing. There are probably lots of worms inside. So why do we need a mediocre performer like Azman Mokhtar around?

Is it just to pacify Pak Lah?

As far as the toll, when there is a will, there is a way. Since everything else is raising, a lowering of transport cost from the lowering of toll could help to reduce the risk of a runaway inflation in the making and save Najib's Premiership.

Inflation only make our delicate growth vulnerable. At 5.3% for last quarter announcement but recently mentioned as 4.5-5% for 2013 forecast, inflation would only negate all the growth.

Seriously think about. As far as toll hike, the government have an option but it is a hard decision to make.

No toll hike is only for PLUS laa but others like NPE, LDP & AKLEH will go up as mentioned before.

Bro, Wahid said there will be no toll hikes on Plus highways until 2015. Also, I don't think Khazanah is "controlling holder of all toll concessions", as you wrote. They only control Plus. There are many other highway operators out there.

Be sure to report in the entirety but we said a lot of things.

Most of the major toll operations are with UEM and PLUS.

Believe some operators in the city are already restrutured.