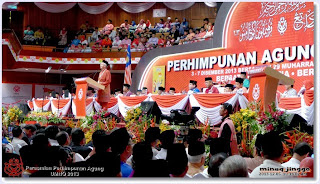 As claimed by some moron, the last time blogs like ABITW [read here] wrote on the exposed sexual preference of the Prime Minister's speechwriter, Professor Dato Dr Khairul Anas, we were accused of trying distract Dato Najib's budget speech. It turns out the budget speech was quite acceptable.

Fine and well, this time there is no more talk on Khairul Anas preference for man. On top of that, it is heard that MCMC is out there trying to trace the owner of the blog, The Benchmark that exposed the affidavit in full.

Since they are at it. Khairul Anas should also request MCMC to investigate opposition blogs and Facebooks as well. Don't just be brave to go after our own but dickens is only meant for charles. They have been playing his story many years before.

Also investigate the court for making a public document public. Moronic isn't it? The only way to tell morons is to show how close the similarity of their logic with Forrest Forrest Gump.

Despite no distraction on his gay lifestyle, Khairul Anas written opening speech for PM is disappointing. Not mincing words. The party, ummah and nation, whichever you wish to translate in Malay as, is facing challenges, but the speech is merely explaining the country's policies.

It is so demeaning.

At one time, the Presidential opening speech at the UMNO General Assembly was the keynote speech of the leader of the Malay ummah and sets the tone for the future. Dato Najib's speech was both unimpressive and uninspiring.

Apart from the usual polite complimentary and congratulatory words, there does not seem to be any tone of acknowledgement for the real challenges facing the party, race, ummah and country, let alone any tone setting for the future.

[Read the speech in Pisau.net here.]

President was lost in his congratulatory words for winning the general election based on the increase in number of UMNO seats from 79 to 88.

The fact that BN did badly and almost lost Terengganu was not mentioned. Quite sure Najib knows who set the candidate list in 5 minute discussion with MB.

He did not mention and address the 97% Chinese votes are against BN. Younger profile voters in the upcoming 14th general election are more sensitive and responsive to opposition.

The President choose to talk more about Anwar's political gimmick disputing the election result and answering his spins and lies than talking about preparing the challenges ahead.

Dato Najib was self praising the recent UMNO party election for more inclusiveness but there was a lot of the bad old culture prevailing and at large.

Politics aside, Najib did talk extensively on his transformation agenda but his explanation and depth of his argument was merely resembling our Jabatan Penerangan. Off course, his transformation need explaining in order to get members' support.

But it was not given any different treatment but merely mimicking Dato Idris Jala's points.

The transformation Najib is undertaking affects the Malays and have political ramification. However, the impact on the Malays and Bumiputera was not addressed. It is as though Najib does not realise what is happening on the ground, thus unaware of the need for policies to counter the negative effects.

This country is not just Malay, and Bumiputera but they constitute 65% of the population and is the main voters for UMNO and BN. BN has Chinese and Indian parties but both these two races are only 28-29%. [2010 censure and corrected from speech data.]

Thus UMNO President cannot ignore Bumiputera or it will be at his peril.

The whole post-independent history on policies is about the delicate balancing act of moving for progress, which is the aspiration of the minority commercial race and addressing the laggard masses.

Najib's policy on transformation is addressing on the bigger national agenda without sensitivity to the plight of the masses.

The nation is facing much challenges from the changing economic and trade structure but we will not delve in it. This is the UMNO General Assembly and assembly of the Malay and bumiputera component party of BN so one cannot put aside the Malay and Bumiputera issue.

Whichever way one wish to approach, race-based approach or using different categorisation or open market free for all, the Malays and Bumiputera problems need addressing because it involves the majority of the population.

They should not be excluded. It could mean Najib had foregone the inclusiveness element of the New Economic Model on the majority. 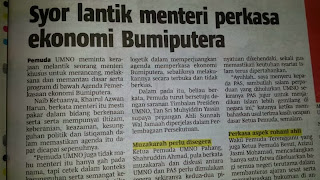 How could Bumiputera issues be dealt with by a "Menteri perkasa ekonomi Bumiputera" as demanded by some NGO or politicians?

It has to be a national agenda.

The transformation agenda has to be about a national agenda with program to transform the Bumiputera to meet the challenges of the present global economic order.

Under the present transformation agenda, affirmative action would surely be in contradiction to the neo-liberal agenda. If that is the agenda Najib is moving towards and that is what it seems to be, then he has to prepare the masses for the new environment.

It is unthinkable that the economic agenda is meant for the benefit of the minority of the population.

Given a choice, we would dump the neo-liberal agenda and develop our own style transformation by a team with no ideological affiliation to consultants with the agenda of the Agog Magog.
at 12/06/2013 11:52:00 AM

A bunch of crabs congregating together talking about their rights to own big cars, buy more properties, marry more wife and then spew out nonsense against the rest of everything.

This is UMNO...the parasites of Malaysia.

I HAVE ENOUGH OF NAJIB AND ROSMAH....no more vote for Najib come next Pru