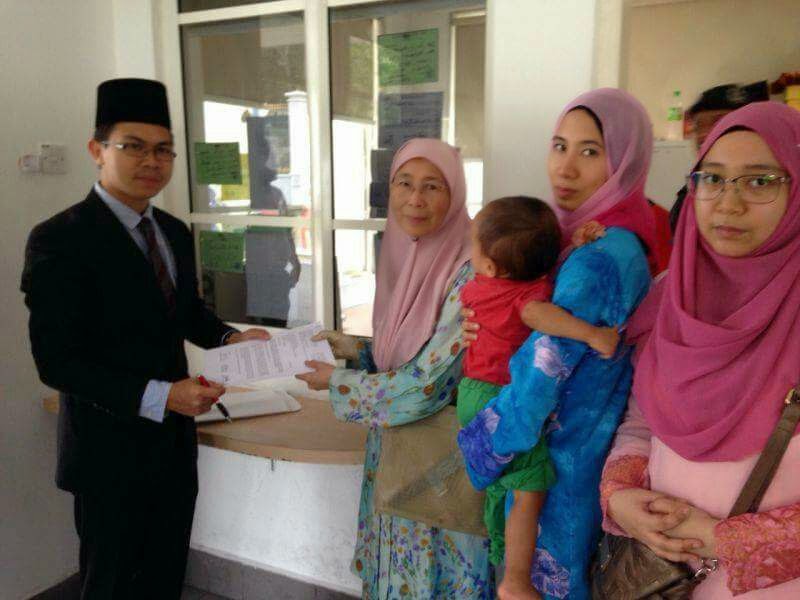 On the first visit on Day 3 of Dato Seri Anwar Ibrahim's imprisonment, lawyer and PKR MP, Sivarasa gave a statement that Anwar refused to seek for royal pardon.

That was the same day Anwar's family attempted to deceive the public that they visited Anwar before the 14 days regulation prison to claim he was suffering from back pain due to the thin pillow. Then came ridiculous stories of mosquito bites, losing weight and maybe later arsenic poisoning and HIV injection.

The dateline for Anwar to seek pardon is today. Failing which, his Permatang Pauh parliamentary seat will be announced vacant for a by-election. 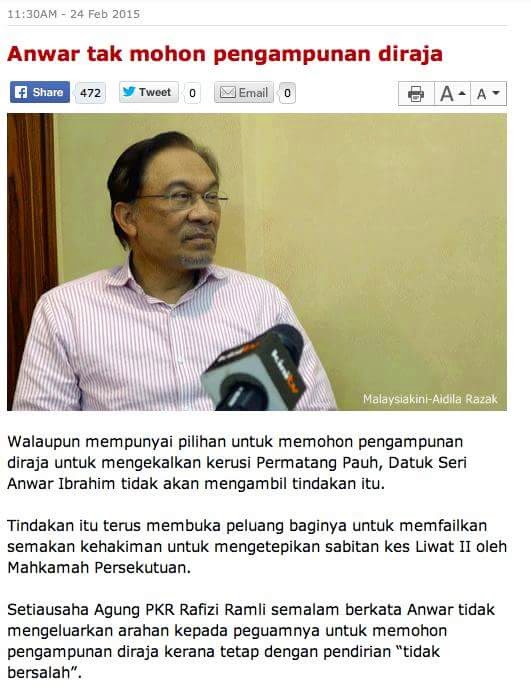 However, by the evening, things changed. Malaysiakini 4:33 PM reported Anwar's family had delivered a letter to the Istana Besar to seek for royal pardon. 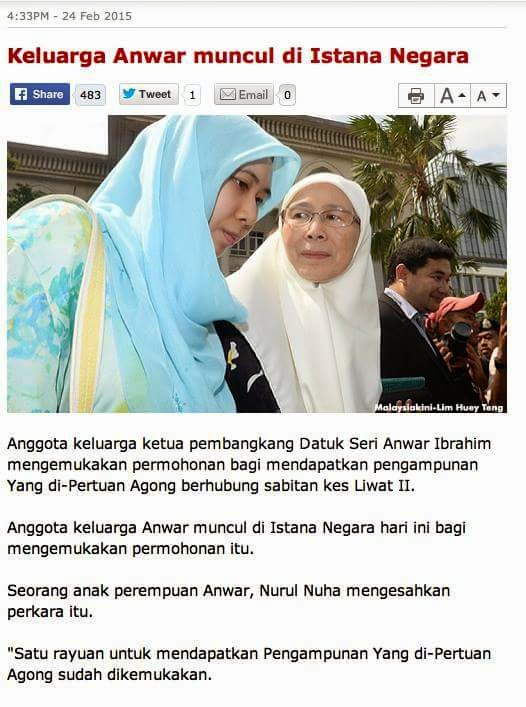 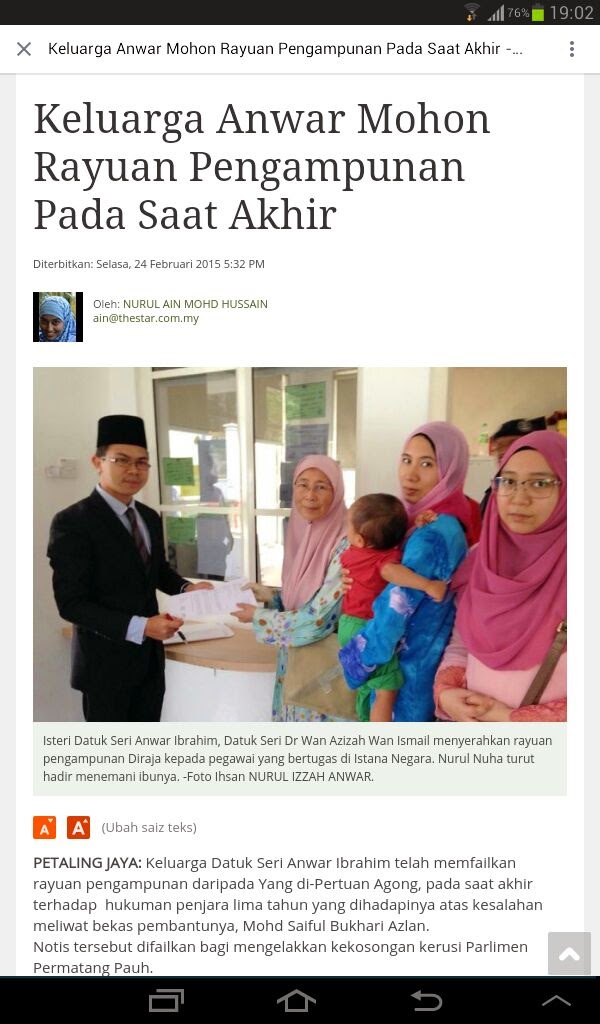 Does the procedure allows third party like family member to seek the pardon on his behalf?

If it was Anwar that seek for pardon, there is the question whether the letter is genuine and not pre-signed. No member of the family is allowed visitation till after 14 days of imprisonment and that is tomorrow.

Tian Chua was reportedly to have said that the basis for the petition from the family member is that there have been a miscarriage of justice. Both way, application to seek royal pardon is the admittance of guilt. 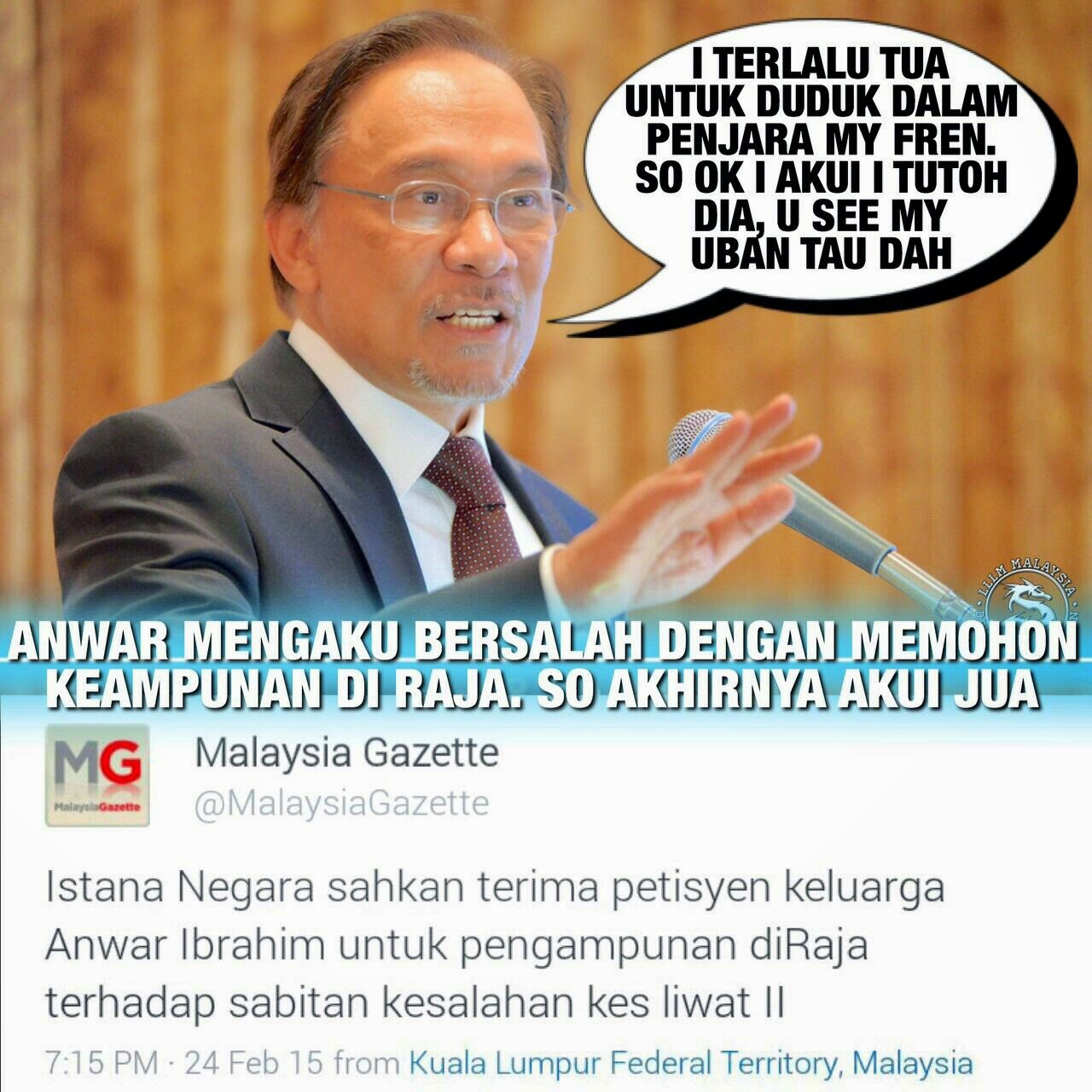 The Speaker of the Parliament has acknowledged receipt of the petition. 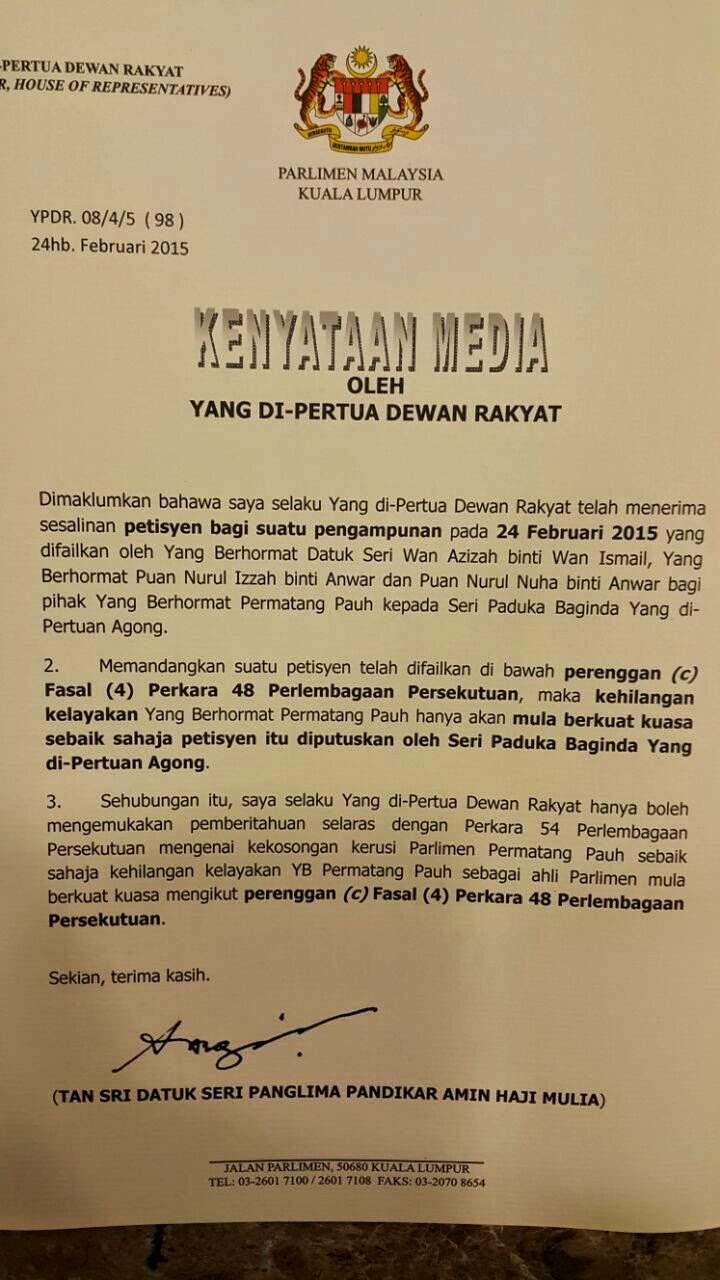 Was Article 48(4)(c) of the Federal Constitution interpreted appropriately by the Speaker? [read here]

In the meanwhile, it means the Permatang Pauh seat will not be announced vacant till the process of seeking royal pardon is completed. Below is the process: 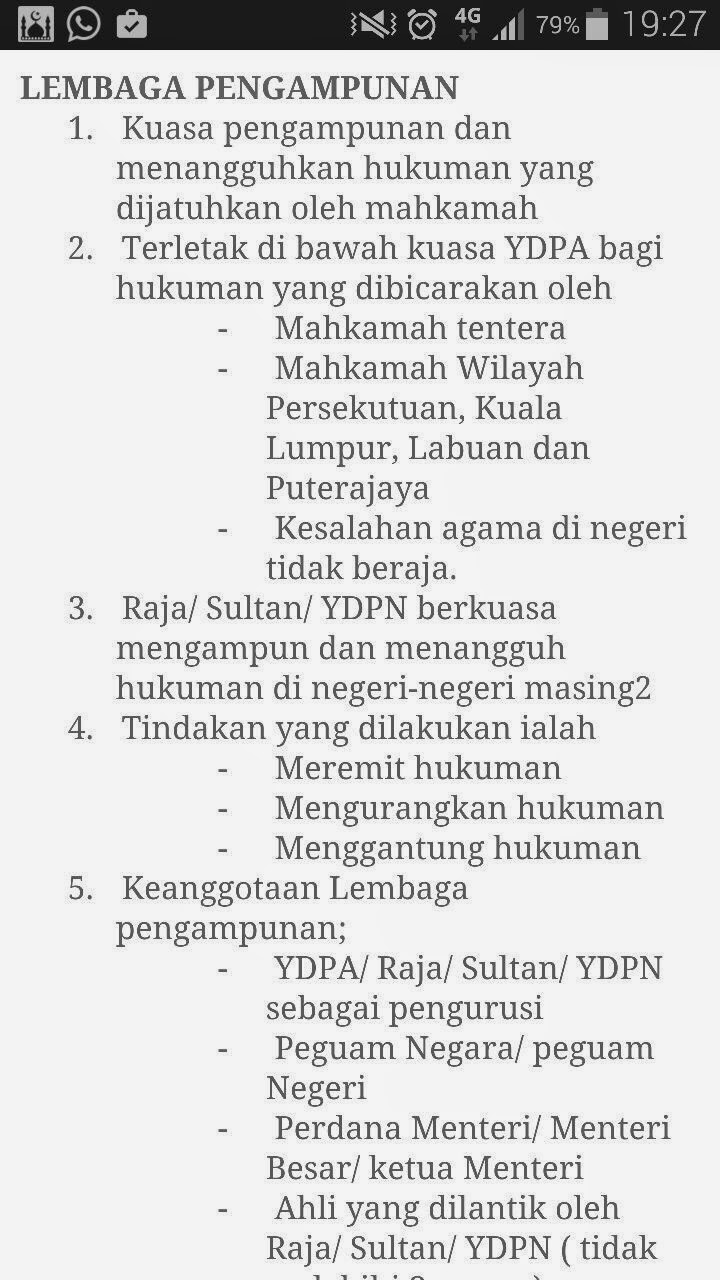 It would be a political suicide should they agree for a pardon because the alleged effort by former Prime Minister Tun Abdullah Ahmad Badawi to "assist" his release contributed to him losing his premiership. It will affirm speculation that there is a deal made between Anwar and Najib.

Gani is due for retirement in few months time. Although he has announced to his close circle that he will not wait a second longer to retire, he has been lobbying through few known channels for another two more years.

For this Johorean, he has done enough to lose Pulau Batu Putih to Singapore. Hope the Johor royalty, state and people express their displeasure openly to halt any such attempt to maintain him. There are available more capable, professional and decisive individuals to replace him. 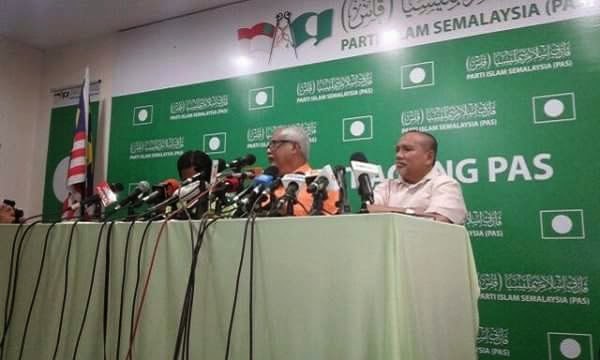 Yesterday, PAS MP for Pokok Sena attempted to pull a stunt to magnify speculation surrounding the convicted Altantunya murderer, Sirul who had ran off to Australia. 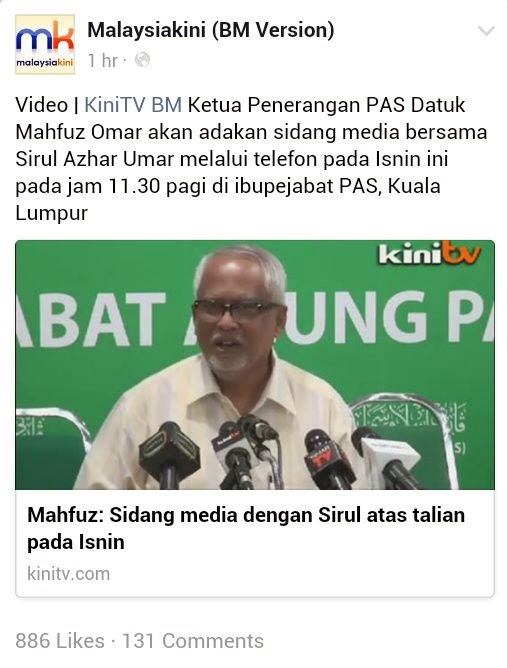 He scheduled a teleconference with Sirul at the PAS headquarter for 11:30 AM.

The opposition had  viralled past years foreign news clipping that speculated the involvement of Dato Najib in the corruption surrounding the murder of Mongolian call girl Altantunya and past picture of of opposition leaders meeting Altantunya's father.

Unfortunately, the viraled news reports lost credibility for using the picture of a deceased Korean singer U Nee instead of Altantunya. The same mistake made by The Star when the story broke out.

Australian newspaper, most likely owned by Rupert Murdoch, made the story current, below: 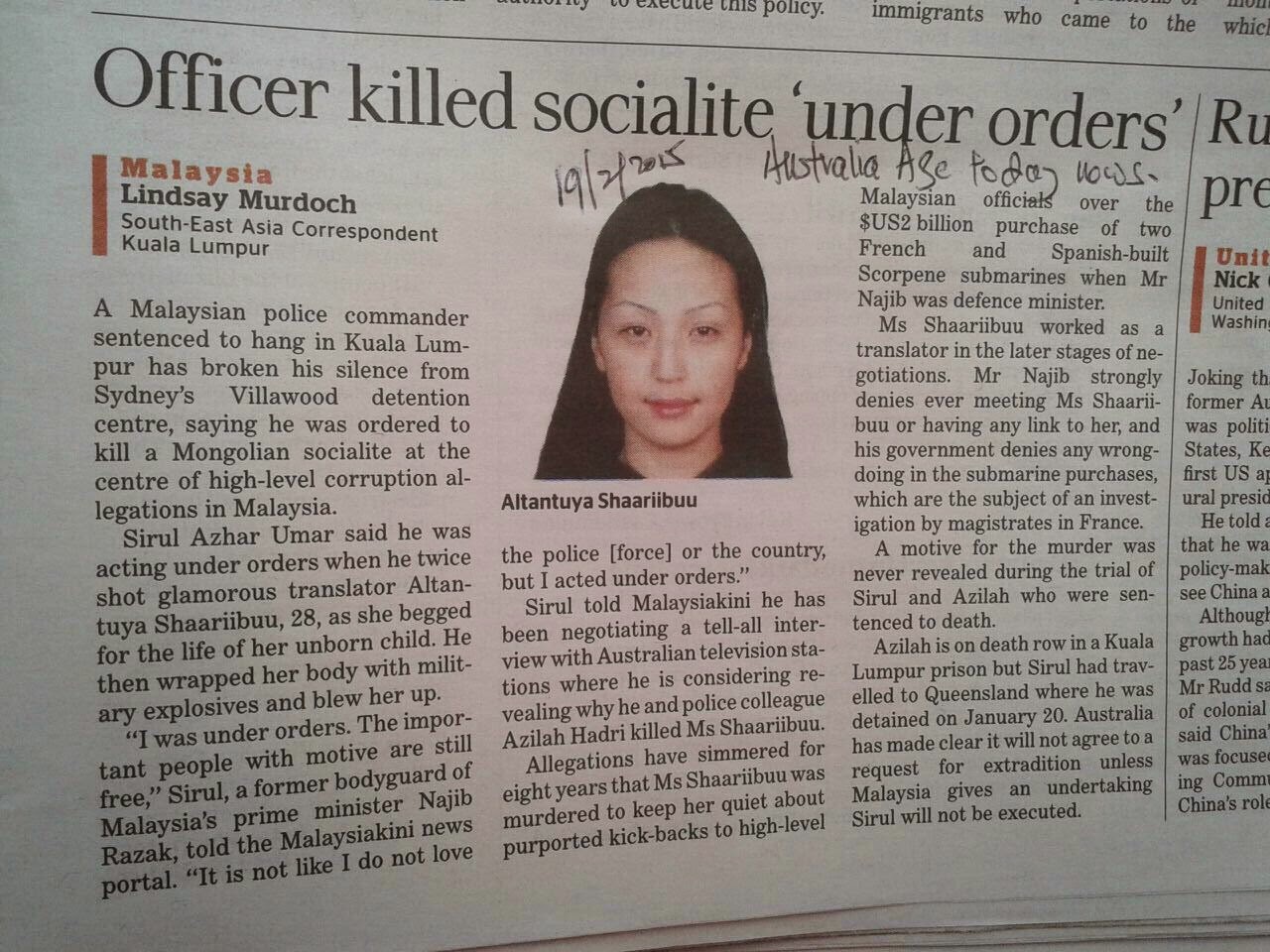 Asia Sentinel, the news portal focused on the Scorpene and Altantunya story, recycled their past years of debunked stories on Scorpene purchase [read here].

They promoted the 2009 statement by Sirul [read here] and gave space to former US Ambassador and Anwar's minder, John Mallot to accuse Razak Baginda [read here]. In 2007, they claimed Altantunya was a translator instead of what she really is, a Hong Kong base call girl.[read here]

One local vernacular paper, Sinar Harian reported bad boy Malaysiakini's report that Sirul allegedly said he had acted at the instruction of a superior but no source was mentioned. 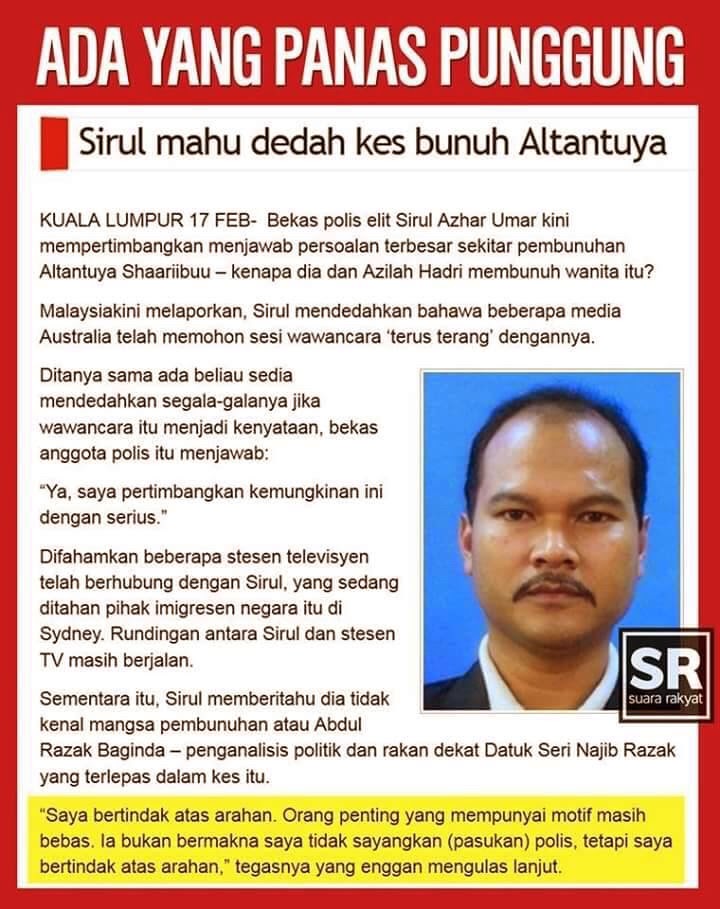 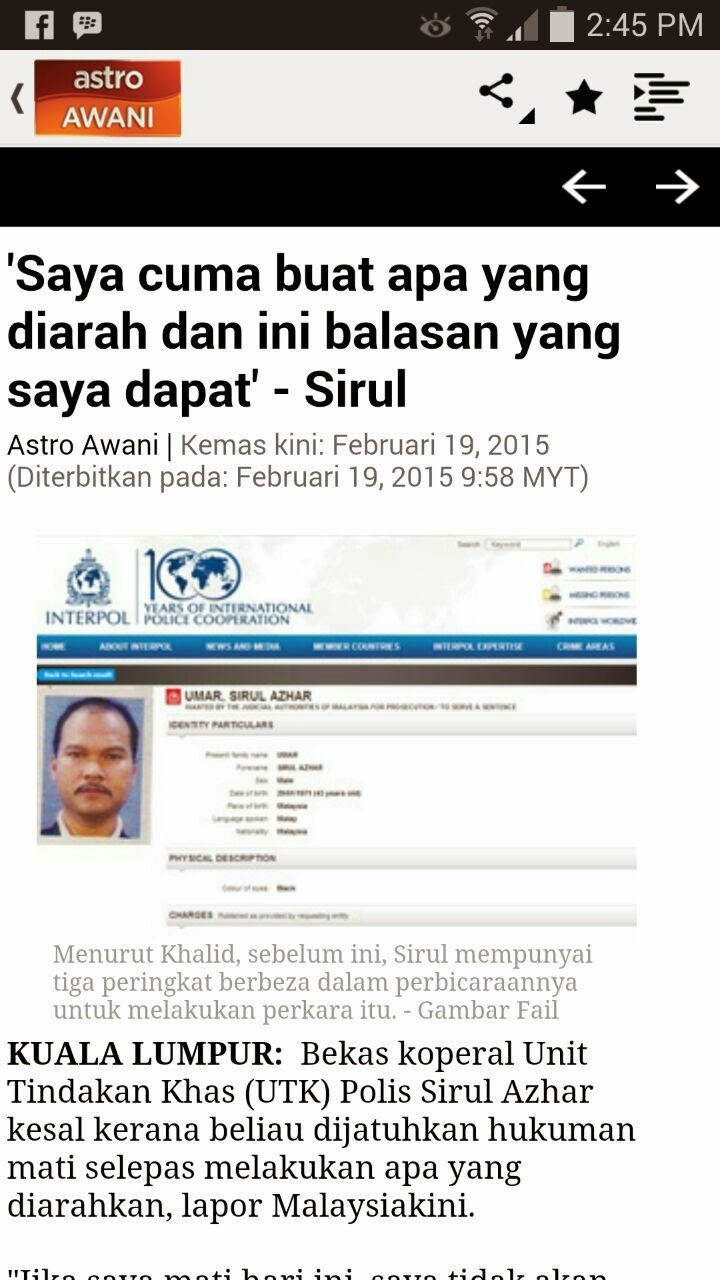 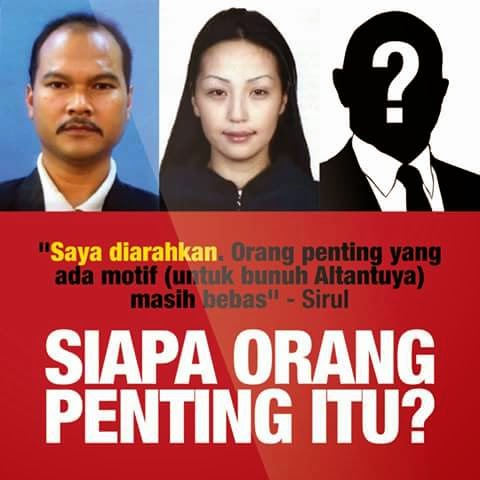 The live press conference was supposed to be held on Saturday morning but nothing happened. That lead saw pro-UMNO bloggers and facebooker posing difficult legal issues for Sirul to anwer.

When it was Mahfuz Omar that organised the PC yesterday and likely to be the champion of the issue, blogger The Unspinners [read here] wrote that there is no credibility to anything raised by Mahfuz and the PC will turn out to be an idiotic stunt.

True enough, Mahfuz could not communicate with Sirul despite 15 attempts. He made up excuse and showed his claimed SMS from Sirul. The Star even tried to spin a face saving report. 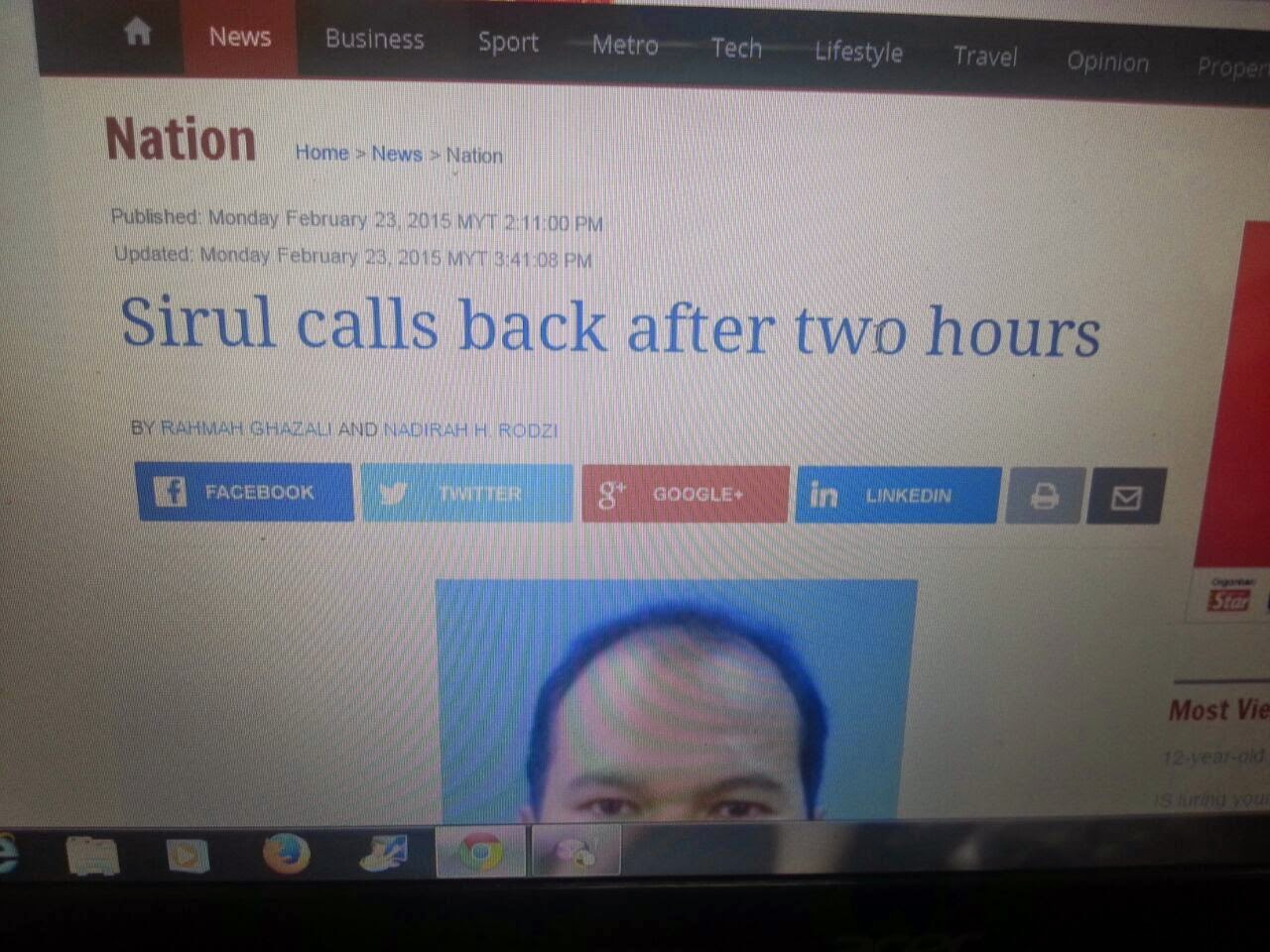 The fact to the matter is Sirul is under Immigration detention thus he is could neither get clearance to call back home or could be in possession of a handphone.

Mentioned in The Unspinners and Bigdogdotcom [read here] that should it be true that Sirul told Malaysiakini he was carrying out the orders of his superior, then it means he confessed to the murder. The implication is that Australia have no choice but not give asylum to self-confessed murderers. Sirul could likely get sent away to Papua New Guinea.

As per the case document, Sirul admitted guilty upon being detained by police. He also took the police to the scene of the murder. And, a rumour had spread that he and Azrilah raped Altantunya before killing her.

Lucky for Sirul that the island nation founded for convict made a clarification: 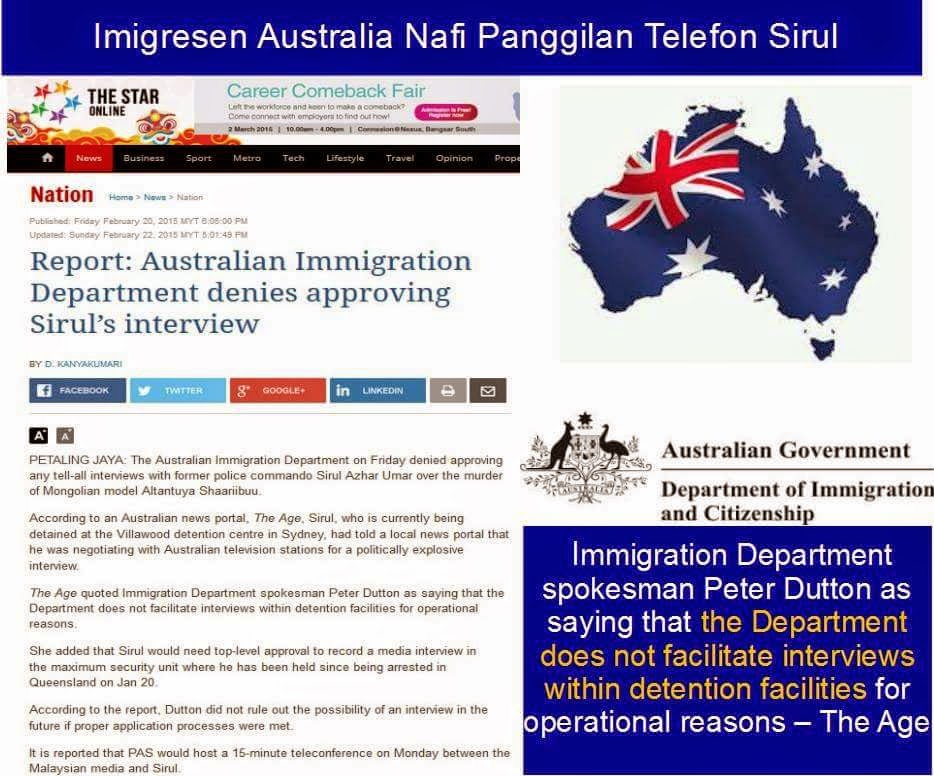 The runaway convicted murderer can stay on in Australia for the time being. And, Najib will have the last laugh on those that ridicule his "Nonsense!" remark. 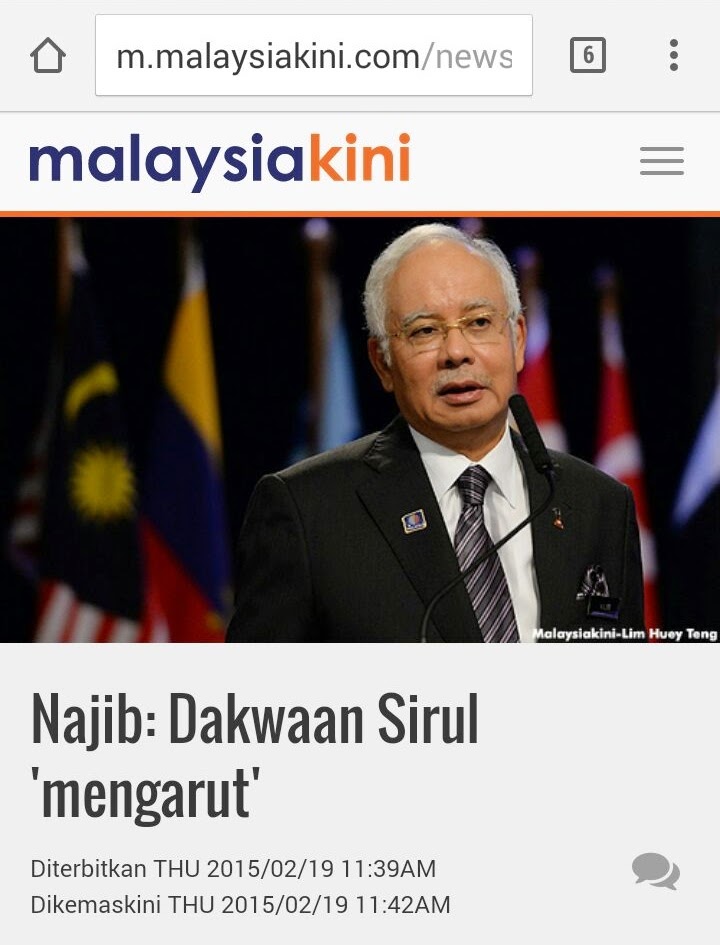 Knowing Mahfuz, he would not have done such a stunt if not advised by someone.

He is one MP that was never taken and should never be taken seriously by anyone. It was the Anwarinas faction that placed this former luggage carrier and storekeeper at Bayan Lepas Airport as Vice President of PAS.

Sirul is useful for the opposition to recycle the Altantunya death into a new spin to deceive the think-they-are-too-clever Gen Y new voters but are actually naive. It has to be an absolute idiot to put this ex-policeman in such a predicament.

Wonder who the idiot that advised Mahfuz.

It is not for the Pardon Board and Agong to look into details of the case. As mentioned by Nuha.

They r again not serious.They are just trying to draw the Palace in their political game.

If the Palace decline then they start attacking the Royal Institution. Afterall Anwar been doing that for quite sometime.

Clearly they are just playing politics.

Should ask lawyers whether this petition valid. One, can it be applied on behalf, 2nd, d grounds for pardon!

They tricked once using the Palace with "we have the numbers" stunt last 2008. Now what is actually on their minds?

Sirul was working for KJ at that time....

Al-Juburi is guilty as spermatazoa trapped in a stinking canal man!