Back in November 2013, this blog posted a friendly reminder to Dato Abdul Wahid Omar for being too comfortable with international rating agencies. Re-read "Bought and sold by rating agencies".

Bankers like AWO rely on rating from such agencies to enable them to source cheaper cost of funding for their clients. Now as Minister, AWO have to ensure the financial management of government is in sync with international expectations.

Bigdogdotcom last posting here reported AWO getting more bullish despite lower oil prices. Our rating improved further and he could now say, "Thanks for the reminder but ... I am right!"

Moody latest on 1MDB could also make them say they are right. It will put few in "Moody Blues". 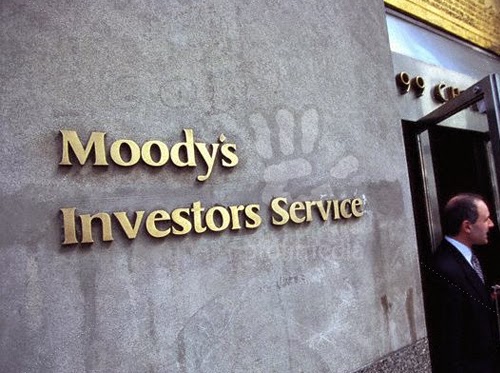 In the Edge Financial Daily yesterday, they reported Moody giving a comforting statement on 1MDB. It came as a surprise since Tun Mahathir had just said Dato Tong Kooi Ong was accused of weakening the ringgit for attacking 1MDB.

Ex-KITA Zamil Ibrahim pressured Tong to hold a press conference because he merely used The Edge and The Malaysian Insider to defend himself. However, having Zamil give a statement was a dead giveaway as to who was behind the frame-up of Tong.

Anyway, the report below:

There will not be any systemic threat to Malaysia’s banking system even if 1Malaysia Development Bhd (1MDB) defaults on its loan as local banks’ exposure to the state wealth fund is collateralised, said Moody’s Investors Service.

“We don’t rate 1MDB so we don’t know if it’s going to reform its debt or not. But if you look at the scale of its debt, it would not represent a systemic threat to the financial system. Firstly, we think the banks’ exposures are collateralised. So, if the worst-case scenario happens, the loss will be probably limited and they will take collateral,” Moody’s vice-president and senior credit officer for financial institutions Eugene Tarzimanov told The Edge Financial Daily.

He was met after a roundtable discussion on Moody’s 2015 outlook for Malaysian sovereign, banks and corporates yesterday.

Moody’s vice-president and senior analyst of sovereign risk Christian de Guzman also hinted that any failure by 1MDB to repay its loans would not affect Malaysia’s sovereign credit ratings as he does not see the government providing support to 1MDB beyond its contractual obligations.

“While we did note there is concern for the sovereign debt — there are contingent liabilities that are looming, in particular the case of 1MDB — we think the government will be hard-pressed to support 1MDB over and above its contractual obligations and I think these are well known [that] it’s limited to RM5.8 billion [in] explicit guarantee.

“But perhaps [even] the support of the RM5.8 billion won’t be as forthcoming, given the political sensitivity around this organisation,” he said, when asked how 1MDB’s debts would affect the country’s sovereign ratings.

Malaysian authorities said last year that the country had provided an explicit guarantee on only RM5.8 billion of 1MDB’s loans.

Moody’s also downplayed the threat of lower oil and commodity prices on Malaysia’s economy, with De Guzman pointing out that Malaysia’s diverse economy is more resilient compared to other oil-exporting countries.

He said Malaysia’s economy has always been portrayed as an oil and gas story, but the reality is that it actually relies more on the services and manufacturing sectors.

He added that Malaysia’s economy is just expected to slow down when there is an oil price shock. Comparatively, other oil-exporting countries such as Venezuela and Russia, may actually see contractions in their economies, which was why Moody’s downgraded the ratings of some of these countries in the past month.

De Guzman commended the Malaysian government for being “proactive” in revising its budget following the oil price slump, compared with other oil-exporting countries.

Moody’s also thinks Malaysia’s corporate credit is resilient, but warned that there might be lower corporate earnings and dividends for commodities-related companies this year.

“The decline in CPO (crude palm oil) or the oil price means the top line is lower [and] the margin will be squeezed, so that will affect earnings. and dividends,” said Moody’s vice-president and senior credit officer for corporate finance Alan Greene, adding that CPO is expected to trade around RM2,240 per tonne.

It is a comfortable endorsement for Dato Najib's budget restructuring.

And, it is a much needed pause for the under-sieged 1MDB. That comforting words could make them complacent and boasting "Thanks for the reminder but ... I am right!".

Their regular detractor have stopped repeating the same answer-seeking questions but actually it is actually a legally safe re-worded accusations of financial mismanagement. He has gone down to writing salacious gossip on Jho Loh.

Hello people pf Malaysia, i was look for a loan and i was scam twice, until i meet this legit lender who lend me 100,000USD, in just for 24hours my loan is transferred to me.i we advice you to contact akimlim_loanfirm19@yahoo.com