Pushing it to The Edge 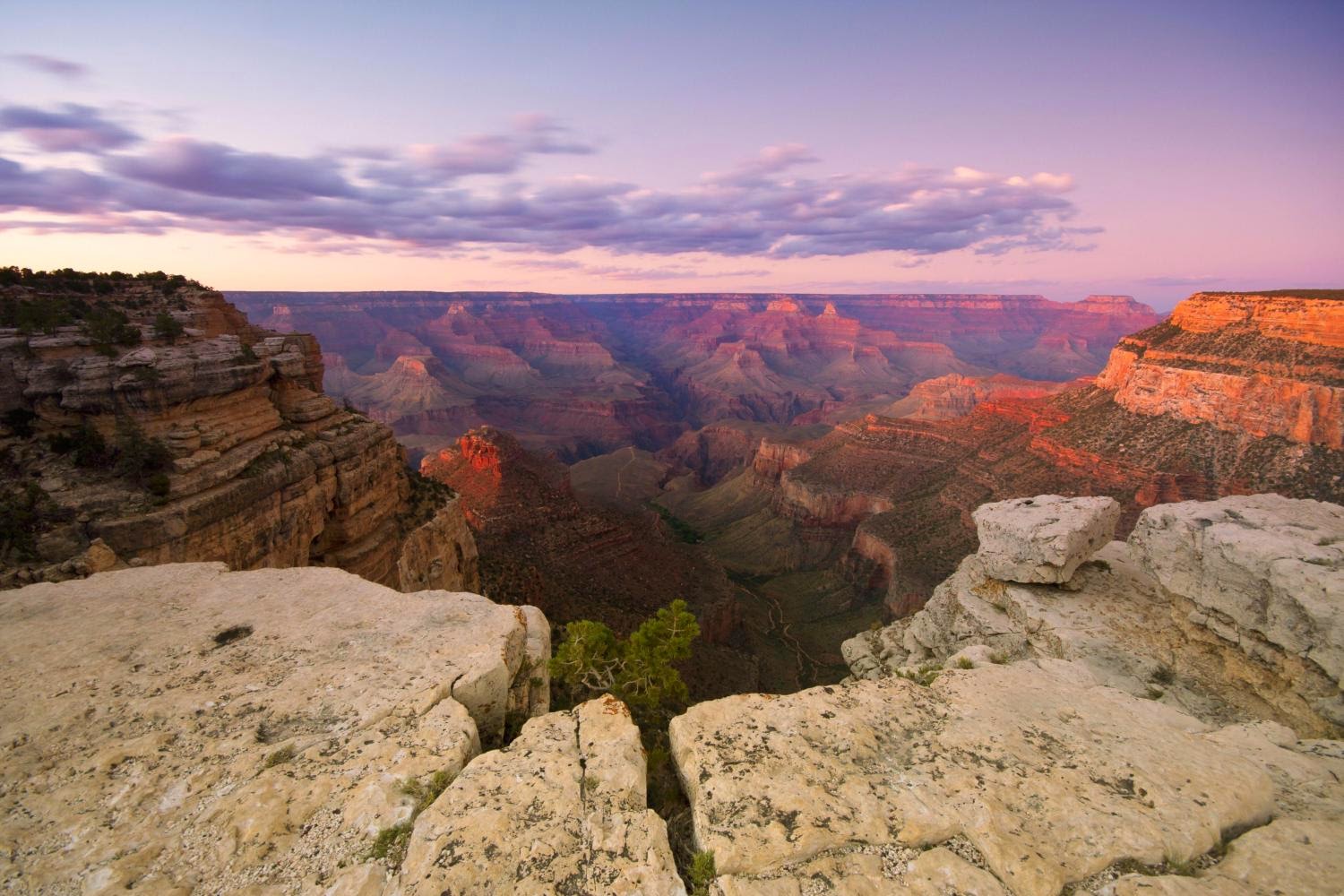 One of the 58 Johanian (Alumni of St John's Institution, Kuala Lumpur) from the class of 1975 (born in 1958) alerted us of one spinning by The Malaysian Insider (TMI) that they found as disgusting.

They wrote a letter to TMI [read here] expresing concern on "extremist viewpoints as championed by those bent on racism and religious bigotry".

They shared the view of their fellow Johanian, Dato Najib Tun Razak that "the decades ahead of us are and will be far more competitive, challenging and equally exciting" thus the country should not get trapped with such dogmatism and "applaud the initiative of the prime minister in launching the Global Movement of Moderates (GMM) in the year 2012". It was if an extremist and shallow liberals not appointed as CEO.

However, TMI twisted their call into a report "Former students of Najib’s alma mater tell him to stop extremism" which subtly accused Najib as the cause of extremism and he should stop it [Read it here].

That must sent them aghast with such pushing to the edge journalism by The Edge online news subsidiary.

In another matter, The Edge had twisted the official statement made by Arul Kanda last week that the much said RM2 billion debt was settled [read here].

That set off a flurry of speculation that it was paid by Tan Sri Ananda Krishnan. So far, none of Ananda's public listed outfit have confirmed. So it leaves the option that it could be his private entity.

This has to be confirmed before a respectable paper like The Edge could claim in the first line of the report below that it settled via a loan from Ananda: 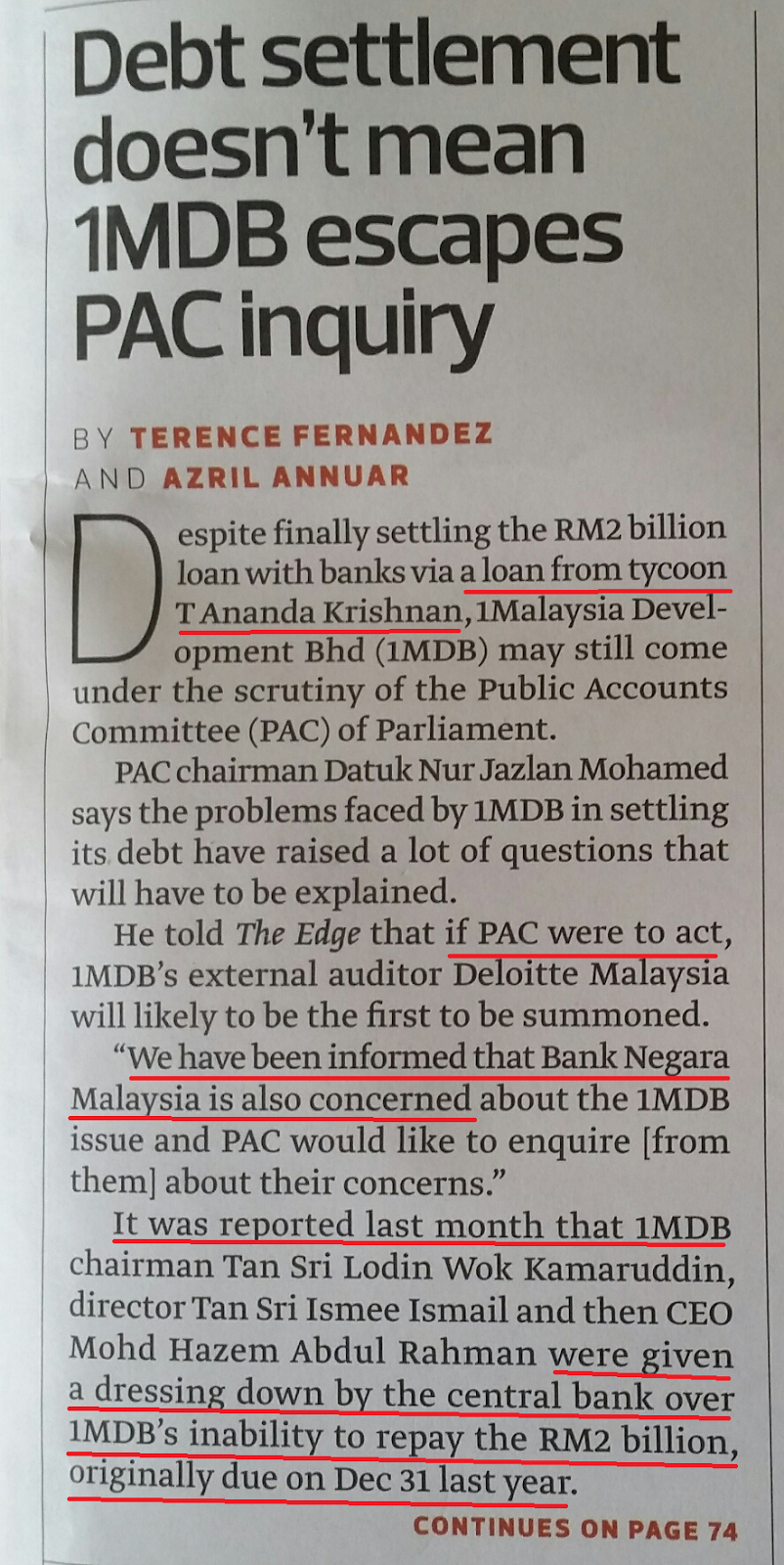 Not only, The Edge reported unconfirmed report involving Bank Negara as though it is the truth when no news and confirmation on the claim have emanated from Bank Negara yet.

So far, Arul's statement had said it was paid ahead of it's scheduled time. Full stop.

However, the evil online news had no shame to admit their allegation had been wrong but went further to demand something that no on-going concern business entity would divulge. They wanted to know how it was paid, and PKR went on to alleged that Putrajaya paid for it [Edge subdiary, TMI wrote here].

The Banks are under the banking secrecy of BAFIA thus cannot divulge such information. Should Bank Negara not charge them for BAFIA?

Maybe the evidence is not forthcoming and they are waiting for them to get over the edge.

"If PAC were to act"

What matters is 1MDB did not defaulted as many of these evil online media had alleged. Without any confirmed information, what is the basis for them to make such allegations?

It only goes back to our previous posting, "Anonymously sourced allegations" [read here] that all allegations have yet to be substantiated.

Anonymous sources provide us the lead and story but it need to be confirmed and substantiated before it get published. Otherwise, stop pretending to be journalist and join us as bloggers.

On the PAC enquiry, so what they managed to quote from Dato Nurjazlan.

He has said that there is no enquiry on 1MDB. So TMI reported he express concern but there was no confirmed concern. Nurjazlan was said to say. "He was informed by Bank Negara" blah blah blah but who informed him?

He confirmed that Bank Negara has yet to  confirm their concern because he will only enquire from them.

And important quote "if PAC were to act". The word is "if" but TMI made as though there is a PAC enquiry. Read the rest of the report below: 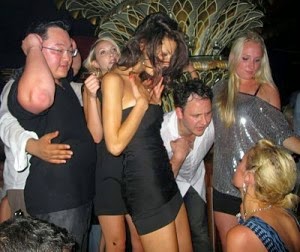 Over the weekend, Arul giiven an interview with Mingguan Malaysia. FMT [read here] and TMI spinned spin his words to say Arul said Jho Loh has no connection with 1MDB.

TMI immediately went about town to say Arul lied and made a piece to expose on of the Director of 1MDB is his father's busines partner.

Arul immediately clarified that FMT and TMI had misquoted him [read TMI here]. He said in Mingguan Malaysia:


The actual quote is "Malah, dakwaan yang mengatakan ayahnya atau kawannya menjadi pengarah di 1MDB juga tidak tepat". Translated, this means "In fact, the claim that his father or his friends are directors at 1MDB is not accurate".

While it is naughty on TMI, Sir Wenger J Khairy highlighted important public relation lessons to Arul. The important one is to never try to create a false impression [read him in TMI here] because there are others more pro at that game.

As raised by us  here, it is "Time for Jho Loh to start singing" or Najib has to cut off this controversial fella. He should have been cut off from the beginning when he was allegedly caught sharing his commission or a better word for it is kickback with one of the Sultan's sibling.

The lifestyle and business affair of this young investment banker is his private affair, but it attract negative perception of Najib and he has already too much slanders to handle.
at 2/18/2015 10:32:00 AM

Bafia 1989 has been superseded by FSA 2013. Please update your references

If u only wait for things to be made official before u want to accept things, then u must be really slow. U do know things run behind the scenes and what is official might worth shit all compared to the true nature? Kanda goes on 1mdb paid ahead of the stipulated time but what he failed to highlight was that the stipulated time was after extension(s). Now reports are surfacing that 2.1 bil in treasury notes were issued as per according to rafizi. Should we wait for something official before we start to piece pieces?

The Singapore Straits Times did a full page report on 1MDB today with the heading "With its debt of $16b, 1MDB burns a huge hole in the ground".

Is this indicative of a sound organisation?

Chua Hak Bin, an economist at Bank of America Merrill Lynch: "There are concerns that 1MDB has grown from a fiscal issue to somewhat of a broader systemic and political issue. And this comes at a difficult time for Malaysia, when the government is facing a fiscal hole from collapsing oil prices."

Maybe you might think that this is a biased view from a Singapore-based economist.

But the report also quoted prominent Malaysians on the subject of 1MDB. Thus

Tun Dr Mahathir: "1MDB is said to be a sovereign wealth fund, but it is not. It is money we have borrowed. When we borrow, we have to pay back. This is not wealth. In my opinion, even if there is no 1MDB, it would be fine."

Tun Daim Zainuddin: "The fear among the public is that the government is too secretive about 1MDB deals, which include the acquisition of an expired power plant which it could actually have gotten free. The government and the board of directors of 1MDB have failed to come out with any statement regarding these allegations."

Datuk Kadir Jasin: "The country's financial and banking system is exposed to systemic risk if 1MDB fails to settle its huge debts."

The ST report also said: "He (Datuk Kadir Jasin) quoted an unnamed source as saying 1MDB's debts total some 4 per cent of the economy (gross domestic product), the same size as the Renong-UEM loans during the 1997-1998 Asian financial crisis that had resulted in a government bailout."

It reeks of stupidity to associate with the foolish, even if the promise is a valley full of gold!