Betrayal of an UMNO division leader 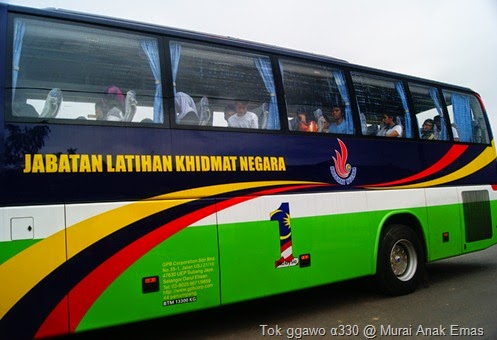 One of the shareholder is strongly believed to be Perak DAP Chairman, Dato Ngeh Koo Ham.

Ismail Sabri wished Malay consumers could unite and apply pressure on such establishment to conform but they couldn't care less and still frequent the place. a year or two ago, Ngeh questioned the enquiry by a Pemuda UMNO exco, Arman on the halal status of OTWC.

For UMNO leaders to expect such unity and support from the Malays, UMNO itself should be seen as united and free from betrayal from among themselves. It is heard that one UMNO leader demanded on Ismail Sabri to apologise in a closed door meeting.

That sort of betrayal is common but the betrayal in this posting is more revolting.

Dato Najib announced that the next batch 2 and 3 of the scheduled PLKN session will be deferred for the sake of budget restructuring. That would be a setback for one beneficiary of PLKN, i.e. Gunung Capital Berhad. [Read The Star here.] 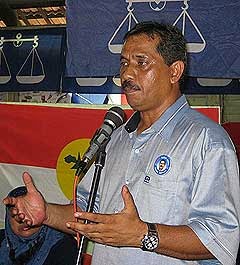 His name reminded us of our friend, the UMNO candidate for Bukit Gantang parliament, Ismail Mohd Pian for the last general election.

He lost and the seat was won handsomely by Ngeh's second cousin and former Perak MB, Datuk Seri Muhammad Nizar Jamaluddin. Our political intel alleged that Ismail's campaign was sabotaged by Syed Hussin.

His company, GPB Corporation was recently awarded another 3-year contract worth RM165mil by MINDEF to provide bus services for the PLKN programme [read this December 29 2014 announcement here].

The Bloomberg report provide the following brief on the company:


Gunung Capital Berhad, an investment holding company, charters its fleet of land-based passenger transportation assets and specialty vehicles principally in Malaysia. It operates in three segments: Transportation Services, Hydropower Activities, and Investment Holding and Others. The company’s portfolio comprises various vehicles, including coaches, city buses, and vans and pick-up trucks, as well as mobile clinics, such as general clinics, optometry clinics, dental clinics, and mini mobile clinics. It is also involved in property investment activities; and the development, maintenance, and operation of mini-hydro power plants. The company, formerly known as Taiping Super Berhad, is headquartered in Subang Jaya, Malaysia. 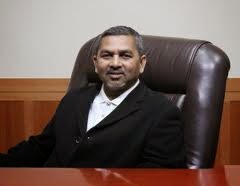 A source close to him described Syed Hussin as per the description by a blog here, a "low profile businessman". He said, "Dia sama melepek macam kita juga."

His background as per pg 12 of Gunung Capital 2013 Annual Report here does no show him as a man with much academic or professional experience.

His fortune changed when he got the PLKN contract in 2009/10. Suddenly was able to conjour up the idea of taking control of an ailing public listed company using a reverse takeover or reverse merger as some described.

The company website here could not be upload. The stock is still traded [see Chartnexus.com here] but one source told us, Gunung Capital will be going private. That could be the suspected reason the website is shut.

The original major shareholder of the company was one Low Bak Teik who controls Latexx Partners Berhad. He is said to be the richest man in Taiping Perak.

Gunung Capital was badly in the red and in April 2010, they announced a corporate exercise to undertake a capital reduction, acquisition of Syed Hussin's company, rights issue and M&A.

GPB corporation was then awarded the transportation contract for PLKN till December 2014 [read the Circular to Shareholders here]. Using GPB, he manage to do a reverse takeover of Gunung Capital.

By the end of September 2011 and after a series of shares acquisition by Syed Hussin and shares sales by Low Bak Teik, Syed Hussin emerged as the major shareholder [read this announcement here].

Gunung Capital was never in the radar of analyst and it is difficult to get information on the Internet except for this July 2011 posting here. The blog wrote:


... noticed that Dato’ Syed has been consistently increasing his stake in Gunung, now with a 22% stake. Compared with Low Bok Tek’s (via Erayear Equity Sdn Bhd) and Nominees amounting to a 21% equity stake, the stage is set for a possible fight for control.

As such, I am expecting that Low Bok Tek may be willing to sell out is his stake in Gunung to concentrate on his Latexx Partners Bhd, which is currently undertaking an exercise to make Latexx Partners Bhd the largest nitrile glove manufacturer in the world (this would make him the ‘King’ of nitrile glove manufacturing, a title that a ‘Taiping lad’ would dearly strive for).

So who will be taking up his stake in Gunung? ...

There is no jealousy for the good fortune of this guy that used to melepek macam kita. But, this comment only raised curiosity. Where did he get the money to undertake such a massive corporate exercise?

A reliable market player source told us that the reason there was no battle for control was because he was merely a proxy for Low Bak Tek. He is the man with the facility, financial resources and capacity to undertake the PLKN contract.

To alleged Syed Hussin as betraying UMNO for sabotaging UMNO candidate or selling contract to Chinese for easy money, it would not bat an eyelid among UMNO people. It is so rampant that they are tired of talking about it.

Maybe this will get their attention.

Low Bak Teik is a financier of DAP. He funded and helped Lim Kit Siang's campaign for the Gelang Patah parliamentary seat in the last general election.

It means Syed Hussin allegedly sabotaged UMNO's candidate and his partner, or boss to be more precise, funded DAP's campaign.

The government contract was given to him as a Bumiputera entrepreneur. The contract was sold to a DAP financier.

Low Bak Teik will be able to recover the past years losses of Gunung and secure more business opportunities, local and abroad. Syed Hussin will forever be seeking one contract after another from government.

If Low Bak Tek continues to fund DAP, why would one not puke to hear him utter "memperjuangkan agama, bangsa dan negara" in his speech at the Division Annual General Meeting?
at 2/06/2015 08:00:00 PM

Syed Hussein is vary close to Rosmah.
He manage to secure a lot of contrac from MINDEF from Food to army uniform worth bollion of ringgit.

He started to get this contract since Najib was a Defence Minister.

He had zero knowledge on corporate game and Iam not suprise he is fronting for Low.

Your point being what, precisely?

That Malays and Chinese (and Indians) in Malaysia cannot pursue business opportunities together? That everything in Malaysia has to be viewed through the prisms of race and religion? That if one race gets ahead, another race is beggared and left behind?

Get over it, Sir. The world has changed - irretrievably and irreversibly.

If you don't change it, you run the risk of being like the dinosaurs.

That may be ok for you, but don't drag others down with you.

u sounded like a champion for the poor section of the Melayu.

Let see what say u about the scheme that yr idiot Ismail Sabri Yaakob concocted to out source the ST15% beras.

Just a lead up. That scheme has a govt subsidy of RM750/tonne for selling it to the low-income poors.

Sabri's macai converts the ST15% into ST5% & pocket both front.

There is virtually NO ST15% beras in the market now, even though the govt is still paying that subsidy!

Another cornering of trade by the cinabeng?

Not until u realise that beras can only be sold under AP. & all beras AP is held by Melayu ONLY.

none are ingenious innovators and business tycoons coming to malaysia with money, none...