Where Anwar hid behind a skirt, Bar Council President hid behind Ambiga's saree

Bar Council President, Christopher Leong response to the call by 100 lawyers calling for the retraction of his "persecuted, not prosecuted' statement on Dato Seri Anwar Ibrahim's conviction for sodomy was merely to ask them to take their grievance to the Bar AGM next month. [Read TMI here].

Only this time, Christopher is hiding behind Ambiga's saree, said one lawyer in a Whats App Group. Instead of responding responsibly for his remark, he is hiding behind the veil of the Bar Council AGM and seeking reinforcement through an open debate he will chair.

It reminded us of Tan Sri Shafee Abdullah's remark, "Anwar hid behind a skirt" that was made into frontpage headline in NST last week.

The article by Fara Naz Karim below: 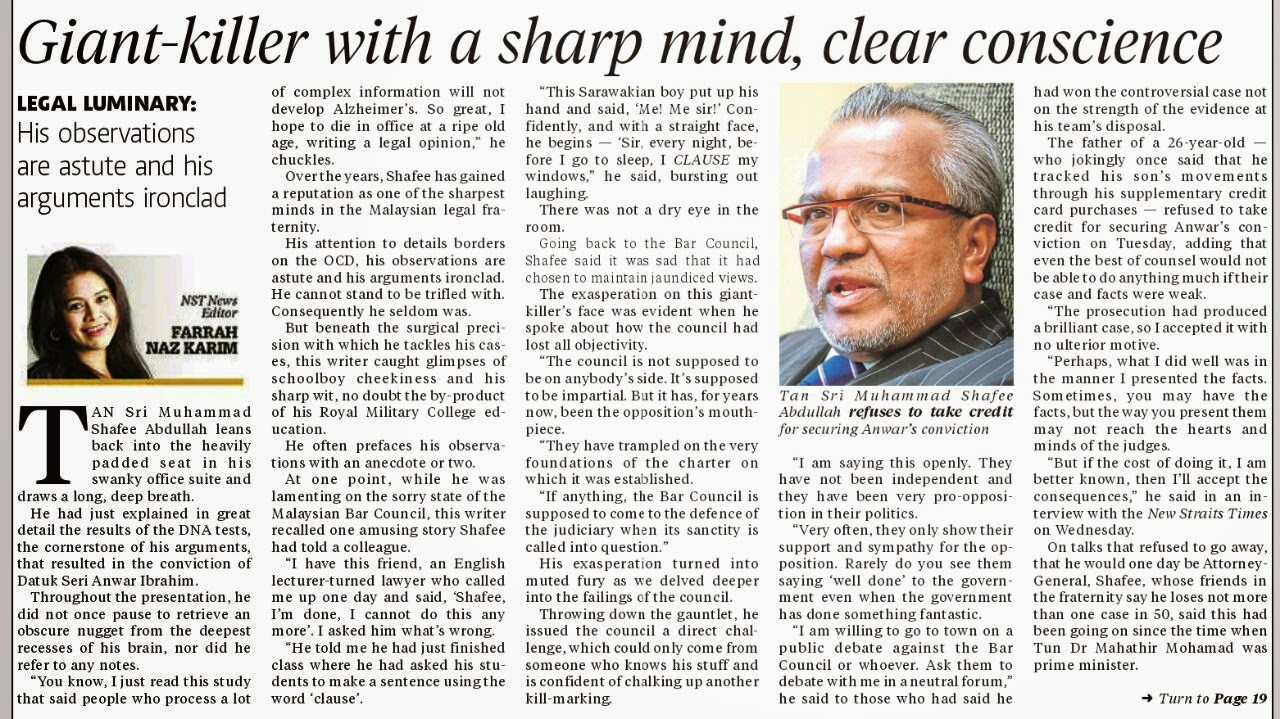 By doing so, Leong is reinforcing a perception that he was merely carrying out the wishes of his handlers. It is known that the Bar Council is heavily influenced and at times, acting for the interest of foreign party/(ies). 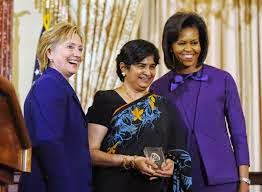 It is known that former Bar Council President, Ambiga is closely associated with certain American interest and was seen accepting an honour from former US State Secretary few years ago. It nly shows she is pally pally with the Americans.

Ambiga's response to Anwar's conviction was to accuse that the state apparatus was systematically used to imprison Anwar. She is known to be very vocal on human rights and LGBT agenda.

Former Bar Council President, Lim Chee Wee used to make remark that current sodomy law as archaic. Sodomy as a crime is as archaic as murder, rape, robbery and other crimes. Will it be a matter of time for Bar Council to seek the repeal of laws for those crimes too?

Few member of the Bar Council like Roger Tan and Phillip Khoo are the unofficial liaison officer for  international Human Rights group. They are part of foreign funded team to systematically dismantle the constitutional make-up of this country through international pressure groups. 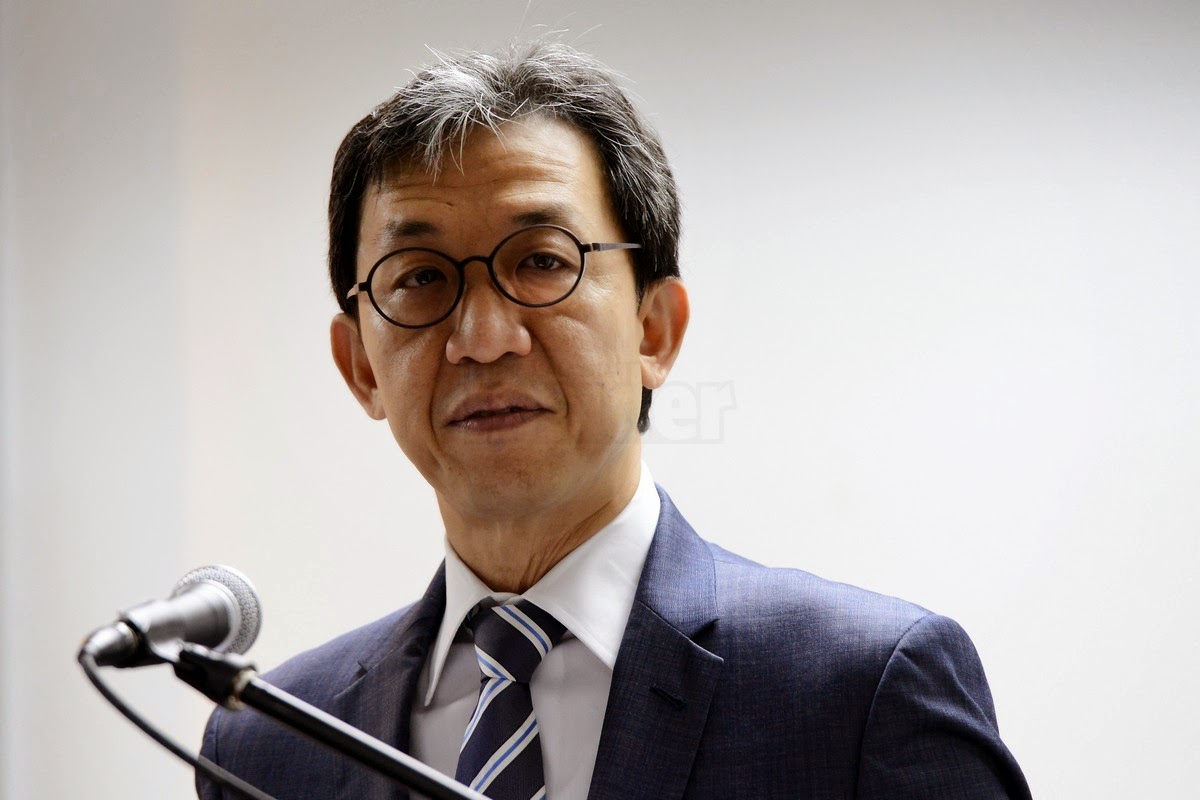 The Bar Council has lost its credibility, its image is now diseased, rotten and an insult to the principles of the organisation, according to the editors of Umno owned Utusan Malaysia today.

This, according to the columnist Awang Selamat, which is the pseudonym for the Bahasa Malaysia daily's collective editorial team, is because of the "wild behaviour" of its leadership, who runs the organisation like an opposition lackey than that of a body that is supposed to uphold and respect the law.

"Such principle should be the cornerstone, not prostituted for some political purposes," he said, responding to a report that 100 lawyers have demanded an apology and retraction from Malaysian Bar president Christopher Leong over his remarks on Datuk Seri Anwar Ibrahim's sodomy conviction.

Awang pointed out that the retraction of the statement and apology is not enough, adding that immediate action should be initiated against Leong by the Attorney-General's Office for contempt.

"Failure to take action will only give the wrong signal to the people, as if the Council and its leaders enjoy immunity for insulting the judges," he said.

He said the umbrella body for lawyers in the peninsular had in the past been known to have caused "troubles" and behaving like a wing of the opposition.

"In their eyes, in Malaysia, everything is bad... The support for certain political parties and this thick political agenda is so strong that it could not be contained and had to be expressed openly."

Awang said, at the rate things are going, the Bar Council might as well change its logo at its office to resemble that of its political allies.

"To Awang, the Bar Council has lost its credibility and integrity. Its image is now diseased, rotten and an insult to the body.

"At the same time, other legal entities around the world, including those from less developed countries, are far more respectable and credible. Shame on you," he said.

Yesterday, some 100 lawyers signed a petition to censure Leong for bringing the judiciary into contempt following his remarks that Anwar was "persecuted, not prosecuted", after the opposition leader lost his last appeal against a sodomy conviction.

The lawyers, all from the peninsula, demanded that Leong retract the statement and tender an unequivocal and unconditional public apology to the judiciary and the public.

The Malaysian Bar has about 15,500 members in the peninsula.

Leong, in an immediate reply said that the lawyers should raise the matter at the Bar's annual general meeting (AGM) to be held next month.

Former Anwar's lawyer, Dato Zainur Zakaria asked, "The president should clarify his statement and the matter could be put to rest if he can explain that the allegation of persecution is not directed at the Federal Court."

Leong’s statement implied that the persecution had been committed by the Federal Court's five-man bench who dismissed Anwar's appeal on February 10 [Read on TMI here].

Leong should be charged for contempt of court.

He argued that the charges levied against Anwar is a seldom used penal code. One source claimed that there are parties in the legal fraternity that fell for this argument and believed there are only 6 such 377 A and B cases that exist and all involved Anwar.

Maybe they like to take a look at the following statistics: 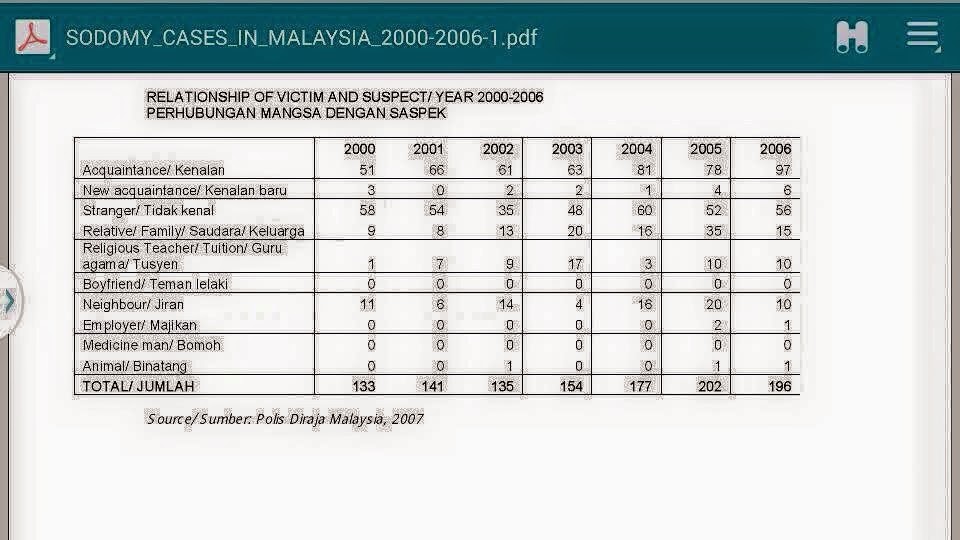 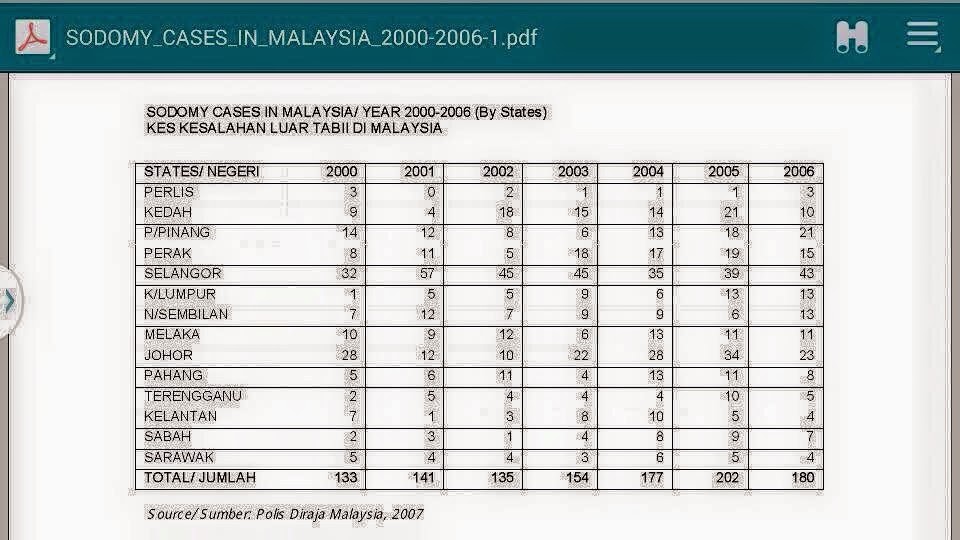 The police official statistics for 2000 to 2006 registered the existence of some 130 to 200 such cases a year with the higher number of cases in the urban centers.

Anwar lawyer, Eric Paulsen claimed "it was his (Leong) legal duty to speak up on public interest issues" and it is "in the tradition of the Bar of upholding justice and speaking up without fear and favour".

The recently charged for making religious motivated hatred against JAKIM, the Executive Director for Lawyers for Liberty could only see the interest of his convicted client but fail to see that justice must serve the interest of the victim, Saiful Bohari.

Sexual abusing others is a crime. The public interest is only to see public safety by having such crime eradicated and offenders prosecuted and put away behind bar.

A country with more than 90% of the population subscribe to a religion and eatern value that does condone sodomy cannot subscribe to such hedonistic western human right views to liberalise LGBT.

An important legal point to note is that it was not a case of "suka sama suka" as once claimed by Leong. An element of force existed. Open your heart and give Shafee's explanation a listen:


Bar Council together with Anwar's foreign friends and supporters are dead set to paint the conviction as a conspiracy without considering the case fact.

Since Shafee's talk at AKHI and the beginning of a roadshow to go to the ground to explain after years of silence to comply with court procedures, the opposition have been discrediting Shafee and some vested interest in the Government legal authority have been criticising Shafee.

Opposition has been going on a roadshow on this contemptous accusation against the court, and raising various issues including recycling issues on Altantunya's death and vile attack against Datin Seri Rosmah to divert attention.

Christopher! If you are the president of the Bar Council then don't scream and shout like some Ah Leong, can or not? Bar you then you know ah . . .

A police report should be filed immediately against Leong for contempt of court. AGM will be filled with all Dapshit and Sodomy lawyers that will hustle and bully the complaining group. Use the provision of the law to rid the president.

The sodomy law is archaic because it denies the right of consenting adult to have same-sex relationship. It should be banished from Malaysia.

We must stop KJ using government facilities and AhJibGors support to faclitate Shaffie's righteousness based on his beliefs on the evidence and the presentations.
The three of them forgot that Saifuls rights of privacy.
Three of of them has denied us, the public the rakyat from being unwillingly exposed to shafiees belif on the evidence.
Cukup lah.
The three of them are sellers of maruah orang melayu.
Cukup lah dengan liberalism moderation inklusivity 1M kelainan endless possibilities luar dugaan luar jangkaan.
AhJibgor,ini macam perangai orang bangsawan ka ?
Nak lawan extremism, Ka ?
arjuna waspada
changkat lobak.