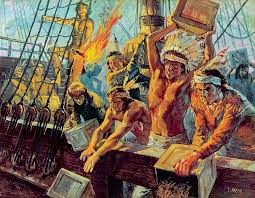 As far as the new Goods and Services Tax (GST), we are for it.

Theoretically, it is a fairer taxation system than the current situation in which only 2.3% of the 13.3 million voters pay taxes.

The Boston Tea Party of 1776 was about the colonial protesting against "taxation without representation." [Read about it here.] In Malaysia, the situation is the other way around. It is over-representation without taxation.

Non tax payers and tax evaders with no sense responsibility asking for endless help from government without taking up their fair share of responsibility for the nation.

The point will be further understood with the fact that the bulk of government revenue come from income tax in which 65-70% is contributed by Petronas and GLC. Basically, government raised it's own revenue through businesses and that money is used to run the nation.

Since Government can function on it's own, it seems far fetch but Malaysia does not need representative or democratic system of government. Kerajaan should have remain as raja-led monarchy.

No worry we are not going to agree on that. However, it's citizen must play their part and stop demanding abolishment of GST by threatening through through the ballot box. Till it is election time, Government must be allowed to govern accordingly.

If Pakatan Rakyat were to take over government, we believe they will not abolish GST. Like many of the promises they made before the election, they had negate on the many promises to abolish many of the suitable and advantageous policies of the previous BN state government. 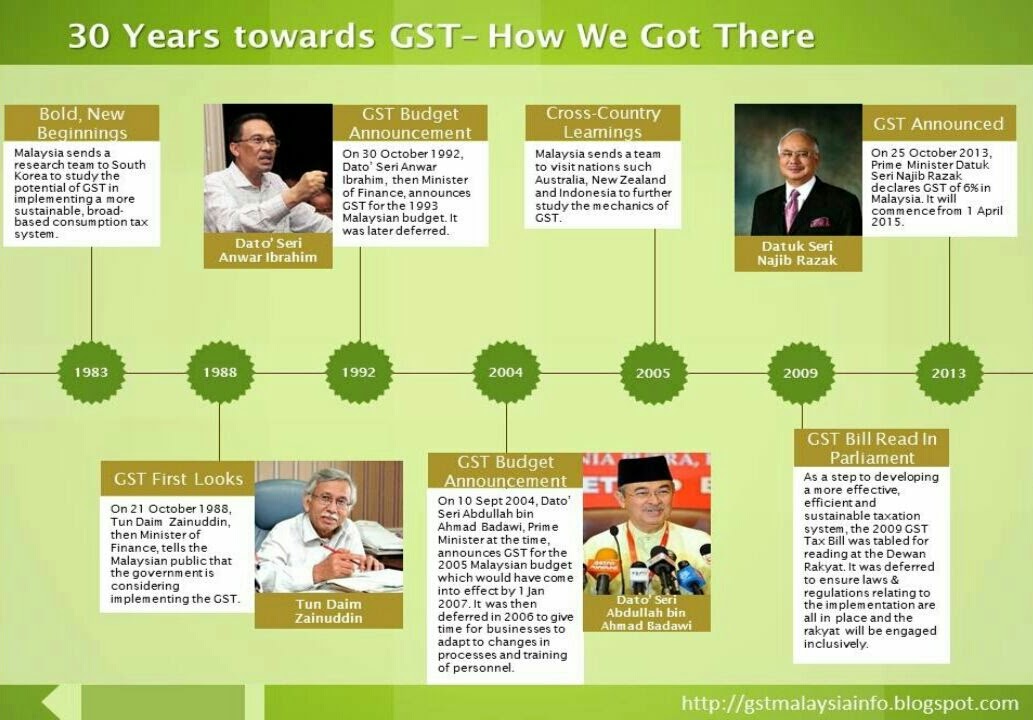 In 1994, it was none other than Dato Seri Anwar Ibrahim that admitted GST is a fairer tax system.

One staggering figure is the annual subsidy to IPP in order to maintain electricity at a reasonable level. The figure being bandied around is RM19 billion. It is not us that said it but DAP. [Read Lim Guan Eng in 2011 TMI report here].

Currently, more than 75% of Government tax revenue comes from direct tax in which individual's tax contribution is between 10-12%. So much for seeking more representation with taxation.

Top level income tax was once in the region of 30-40% but that rate had to be realistically taken down and it has been brought down to within 25%.

Malaysians' pay scale is too low to maintain a high tax rate. In developed countries, government are less reliance on income tax and depend more on consumption tax and GST. Their tax rate are usually in the teens.

Corporate tax had been brought down to a much lower rate to be competitive with the region.

However, the nation cannot depend on Petronas for oil royalty and income tax anymore. Their business is getting more challenging. Oil fields in Malaysia are merely marginal fields. Overseas investment require investments, huge amount of capital and assume political risk.

It is also unrealistic to expect Government to slash budget drastically. Subsidy can only be further reduced when the higher income model begin to work. The average income increase is still going at snail's pace. Believed Dato Abdul Wahid Omar mentioned a figure of less than 4% per annum.

Pushing for higher income is not so simple. It attracts inflation and result in no net gain of disposable income. Currently it is the income at the higher bracket that is experiencing marked increases but not the lower end of the salary scale.

Higher income at the lower end will result in higher budget for government.

Government don't seem to have sufficient political will to institute minimum wage. The plantation owner in which quite a major few are government companies are resisting. Someone should find out whether the minimum wage for Government servant is above poverty level.

These could be their fear of minimum wage system.

Basically, GST is one way of raising a source of revenue for Government. Contrary to what was said by Dato Ahmad Maslan, all Malaysian that consume goods or service pay a percentage of the consumption to the Government.

Naturally, what is good for Government is not necessarily good for the people. However, there are certain features of Malaysian GST that is sensitive to the people. A long list of consumable goods and services are exempted from GST.

It made the system cranky because other country charged across the board for all items.

There is then the problem of abuse and profiteering. Since they now have to pay their taxes, traders pass the cost to consumer despite being able to get rebate. They are not willing to cough out the cash to pay for the initial GST and wait for the refund but charges the consumers.

Unfortunately, government good intention is marred by their own inability to understand the kiasu attitude and mentality of local traders and small businessmen.

There is also the so-called conspiracy theory that Chinese traders and shopkeepers have gang up to agree to not lower prices but squeeze on the consumers. They are taking advantage of the weak consumerism awareness among Malaysians and timidness to boycott goods or shops.

Presuming all Chinese were to vote DAP and Pakatan Rakyat, it is believed that DAP wanted to create a sense of anger among voters towards government. The anger will be towards government for squeezing into their pocket.

This had put the Government in a difficult situation.

In the first place, traders' refusal to cooperate is expected. If not because of DAP, it had always been the kiasu, opportunist and penny pinching attitude of selfish Malaysians to take advantage of situations without consideration for others.

Malaysian government is good at developing laws and policies but dulu, kini dan selamanya poor at implementing the strategy laid out. There are the usual many compromises and adjustments for political expediencies.

Systems will usually cock up in the initial stage. Most government department were ill-prepared and last minute rush job.

Sin Chew's Deputy Executive Chief Editor wrote that GST was problematic because "Government system is inefficient and our income gap is big."

The usual blame would be the lack of information. However, the GST penerangan have been going on for two years and so it is not an excuse. Maybe there is the problem of a certain agency focusing only on UMNO Divisions and hoping the Division Information service will do it's work.

To say that the pre-implementation engagement had not been done is also not correct. The discussion had been going on for 30 years!

Another perpetual weakness of Government machinery is enforcement. It is laden with corrupt and low paying government officers.

Knowing that system usually cock-up and Malaysians only bother to find out, give feed back and complain at the last minute, it should not have started at full blast. Do so for a certain category of goods and gradually cover all.

To lessen the impact from profiteering and shock to the economic system, the rate should come in at a lower rate first. Say 3% and gradually raise it to 6%, but the public must be made aware that the rate should be 6% but only starting at 3%.

In the meanwhile, get the enforcement to adjust and running.

Another suggestion was to focus GST on the import and export sector. Malaysia is the 16th biggest trading nation in the world. It had a good system that was able to raise about RM36 billion of indirect taxes from excise tax, SST, etc.

The focus should have been at getting GST revenue from product and services related to import and export.

Loopholes and leaks in the system should be plug. Traders and corrupt customs officer have been enriching themselves by taking advantage of it through bribes and commission on smuggling activities.

Top officials have been resisting any attempt to improve the system. Suggestions have been ignored. New system not implemented. By plugging this, government can generate more.

Some optimist claim that once traders are confident they will receive the rebate from the GST output tax then prices will stabilise or be lower again within 3 months. Re-lowering of prices and lower income tax will be the tomorrow both government and public hope will happen.

GSt is bad if the gov is a bigspender