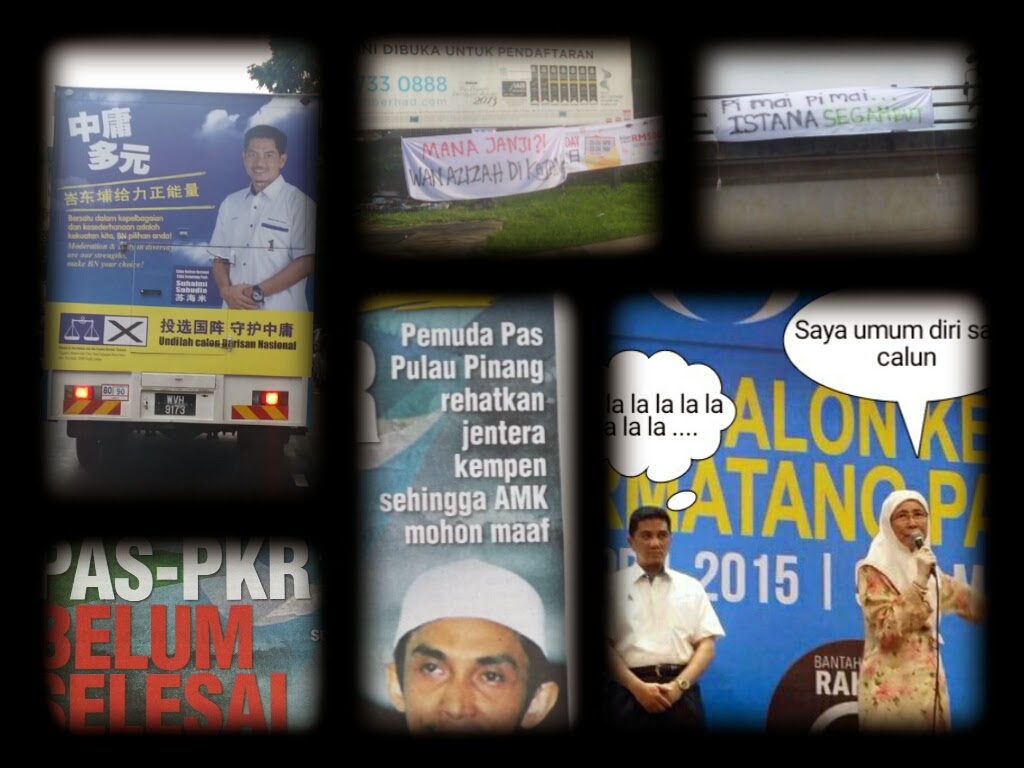 Upon entering Permatang Pauh and going under a highway, spread a banner that reads in Penang accent "Pi Mai Pi Mai ... Istana Segambut."

That epitomise the problem here. Everytime there is a problem with "the" family, the people of Permatang Pauh kept getting dragged into one by-election after another. Subsequently, they return to their big home in Segambut, Kuala Lumpur to continue the family's political saga at a national level.

In Permatang Pauh, the UMNO left by Dato Seri Anwar Ibrahim is left in a turmoil. One Division head after another seemed to be haunted by the ghost left by Anwar in UMNO. The party and machinery continue to be stunted by the aura of Anwar.

This time there is a chance to shed this bad luck of Anwar off. But, it is still not likely to be sufficient to win. 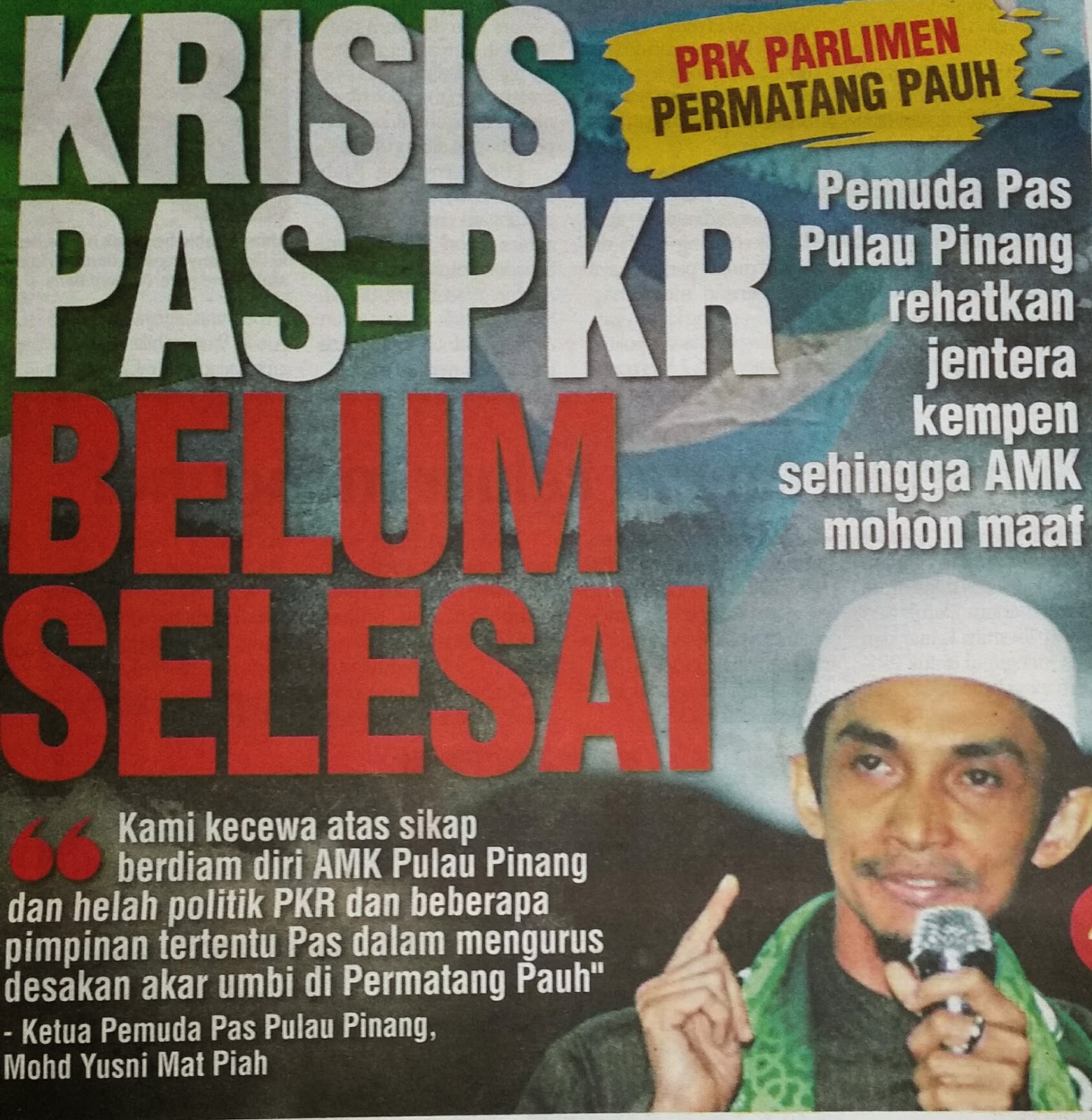 Although the feud between Tun Mahathir against Dato Najib is intensifying, Pakatan Rakyat led by Anwar is now in a turmoil. Though remote to win, BN candidate, Suhami Sabuddin have a change the sentiment.

PAS is in loggerhead with PKR and DAP due to the hudud and Anwar's interference into PAS politics. In the absence of the imprisoned Anwar, DAP has taken over to finance the PASMA rebel.

After being persuaded to return and help, Permatang Pauh's Pas Youth announced stop work and expressing dismay for the insult leveled by AMK toward PAS President Haji Hadi. PAS votes could account for 15% of voters. 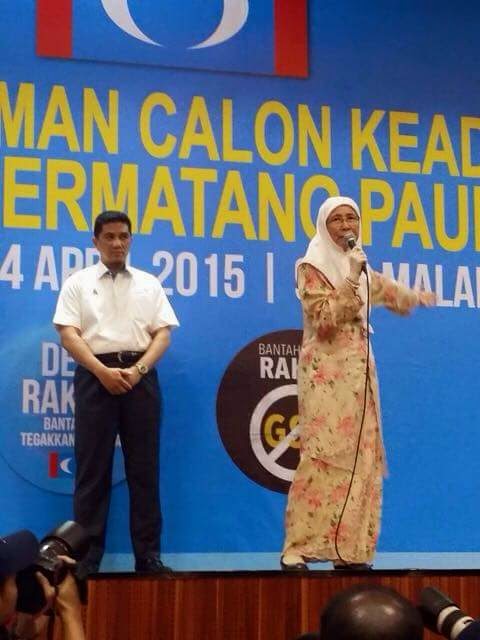 In PKR, there is a rivalry building up between Azmin and Wan Azizah.

Azmin wants to rejuvenate the party and leave the ghost of Anwar and family behind. He was hoping for a younger candidate for Permatang Pauh.


Azmin should be worried with a Wan Azizah win Permatang Pauh. Not so much as her poor performance as state assemblymen in Kajang but her win will delay his rise to the top in PKR.

He is already 51 and had he been an American, he could have been President.

A win will make her the new opposition leader and grassroot will see that as strength. That is unless her majority is lower. UMNO's candidate is only 41 and young.

However, it is not plain sailing for UMNO.

Anyone familiar with the mamak-laden Penang UMNO knows they do the worst cah keting. Unlike other places, Penang UMNO could sabotage their own faction member and close associate.

As it is, there are something like 6 factions inside UMNO Permatang Pauh.

Optimism is still there for Wan Azizah's candidacy. But this time around, she can't take loyalty for granted. The picture of herself with Anwar on banners and buntings cannot be taken for granted to deliver votes.

At 63, Wan Azizah is dubbed the recycle candidate. Challenger Suhaimi is only 41.

PAS expressed openly their disagreement with her candidacy on the principle of opposing nepotism practise. That was spinned as disagreement on matter of hudud and there was a polemic on who apologise to whom and for what reason.

The excitement and euphoria for Anwar is not like before. While neither BN nor Pakatan Rakyat toyed with the sodomy issue, quite a fraction of the fanatic Permatang Pauh voters, especially PAS members, begin to realise he did it. 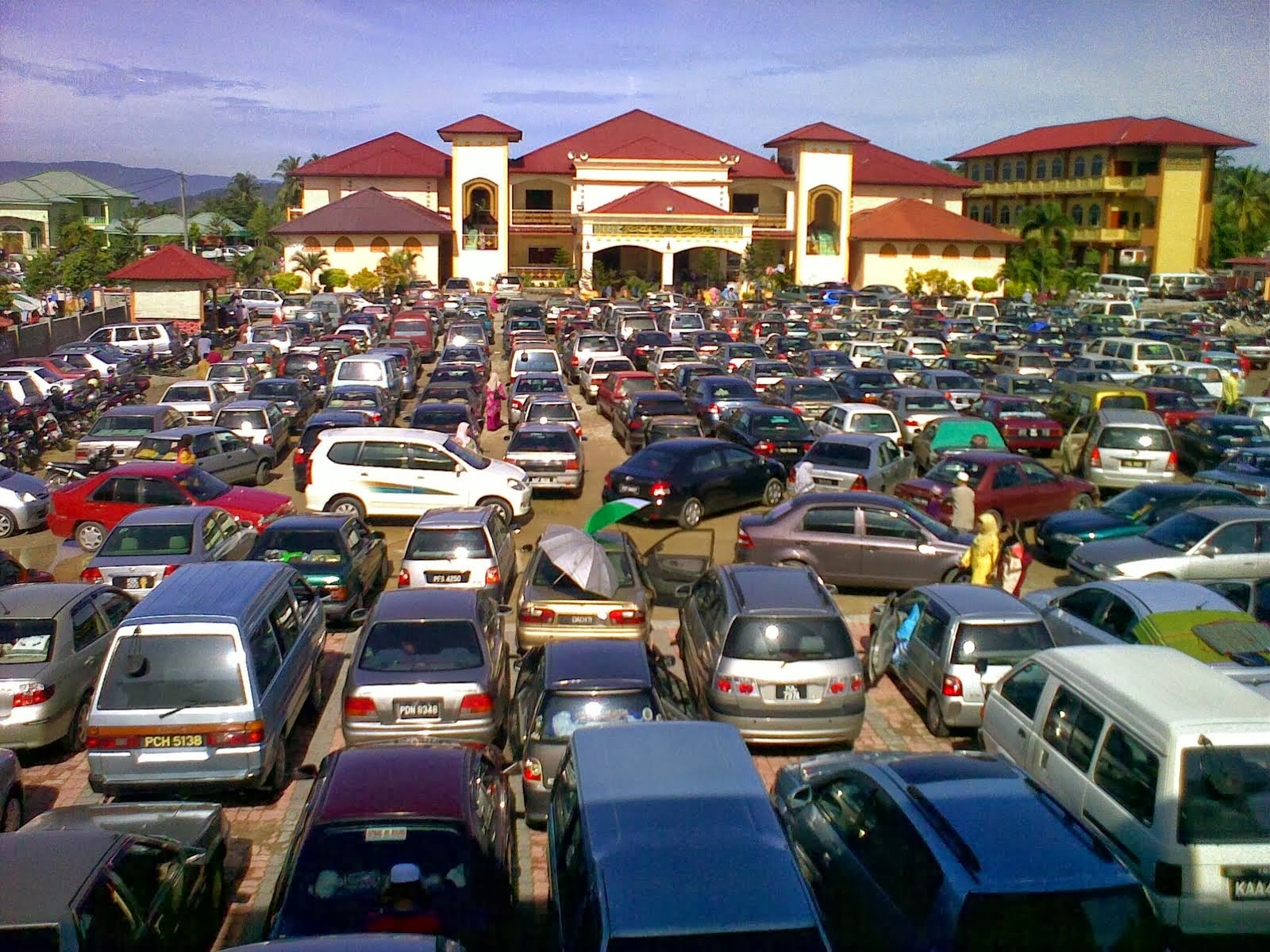 The influence of the Al Nahduh religious school in Kubang Semang, Permatang Pauh is wearing off.

That was Anwar's psywar nerve centre and it was used to defend him against his liwat case. The support of a popular religous institution was important in a rural setting of Permatang Pauh.

The local ustaz operating the centre could draw crowd in the tens of thousands. Anwar finance the school for his selfish political purpose and that caused the break up of the two ustaz partnership. 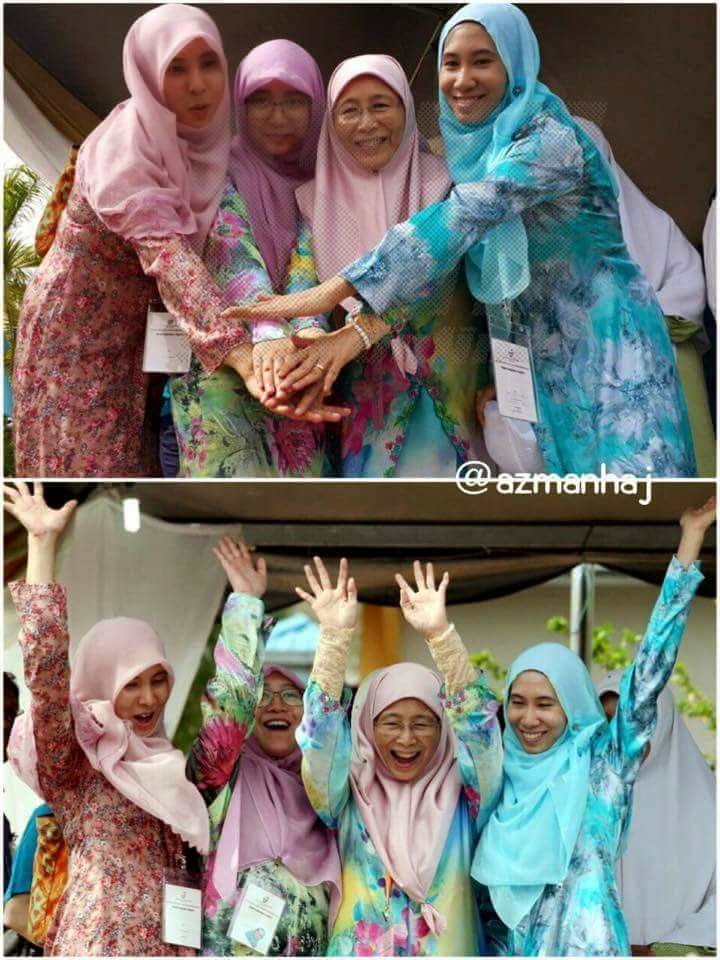 The bigger issue to face Wan Azizah will be her commitment to address the increasing problems due to urbanisation creeping into Permatang Pauh.

Despite situated close to the first Penang bridge, Permatang Pauh remain as a kampong backwater to the city island of Penang. It is part of the highway-laden Seberang Prai which is a crossroad for highway traffic to Penang, North-South Expressway and single-lane country roads to southern Kedah.

Having a former Deputy Prime Minister hardly made a difference. If not for federal effort to establish UITM, Seberang Jaya and Bandar Perda during Anwar's absence, Permatang Pauh woul dhave been totally neglected. Penang government done nothing.

As Wanita UMNO Chief Dato Shahrizat Jalil said in her speech, clock stopped for 17 years. There is some spillover from the island but early signs of urbanisation creeping into the kampongs is not expected to be beneficial to the locals.

Tom Yam eateries, Chinese owned workshop for heavy machinery and small factories sits between the kampong homes. In Tanah Liat, the padi fields are fast being taken over by industries and high rise can be seen in the horizon. Many stories abound of kampong folks losing their land to the trickery of developers or brokers.

A source said the problem have been raised to Anwar but he ignored as he does not wish to rock his good political relation with Lim Guan Eng. A family member was reminded of the neglect problem of Permatang Pauh but her response was only they will talk to Guan Eng.

What have the family been doing all these years? 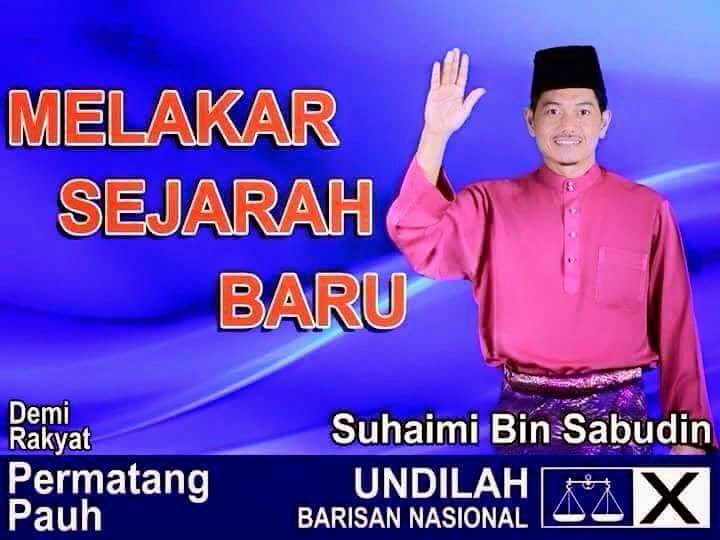 Anwar and Wan Azizah have been winning Permatang Pauh with huge margin of 10-16,000 voters and about 55-65% of the votes. With DAP's backing, the Chinese votes is expected to be solid 20% for PKR.

The 15% PAS voters is assumed to not come out.

Indications are that some regular PKR voters are tired with "the" family saga but even though there could be a 5-10% shift in PKR regular voters to Suhaimi, UMNO must ensure that it's hardcore will come out to vote to give them a fighting chance.

Now, can Suhaimi avoid a sabotage and garner the support of old warlords like Jalil, Ahmad Saad, Arif Shah, and others to create the history he like to make for Permatang Pauh?

Rumours has it that even his division head, Cikgu Zaidi, who was willing to concede candidacy to Suhaimi, will sabotage should a Suhaimi win makes him insecure.
at 4/27/2015 04:47:00 PM

Dream on. Your analysis does not include the big N? There is no way in hell will jijah lose. As much as she is full of shit, the big N is at least three times full to the brim. No mention of gst also? The people are bleeding in permatang pauh and you think BN has a chance? Cant wait for the rompin analysis. Thxx

I hope you do justice by providing an analysis on PRK Rompin.

Whatever happened to UMNO's "peremajaan" call?

Bro.
Your analysis is from someone who is staying outside Permatang Pauh.
The fork in Permatang Pauh could'nt care much about development.If the govertment give them money or project they will take but voting for BN is different issue.

Now BN / Najib have bigger problem.The attack by Tun Mahathir had cause substantian damage to BN and UMNO.
The GST is a major issue.Everybody is not vary happy.
You can tell them GST did not cause the price of good increase.Will they believe you.
They ask vary simple question.Previously they only pay $10 ringgit for the topup mobile phone.Now they have have to pay $10.60 sen.
Permatang Pauh UMNO always have two camp.
Suhaimi is Zaidi Proxy so he will nor saboutage.
But what about his deputy,Ibrahim (Ard burger) he cannot see eyes to eyes with Zaidi.
What about Dato Jalil,he was Ketua bahagian for 14 years.do you think he dont have influence in Ptg Pauh.
They should not ignore him.