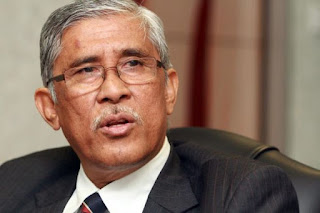 MACC Commissioner, Tan Sri Abu Kassim should come clean and stop reiterating the power to prosecute lies with the Attorney General for the upteen times.


MACC: We are not challenging AG's authority

KUALA LUMPUR: The Malaysian Anti-Corruption Commission today said it had taken note of the advice and recommendations made by the commission's Operations Review Panel on its investigation into issues related to SRC International and the RM2.6bil donation.

MACC Chief Commissioner Tan Sri Abu Kassim Mohamed, in a statement tonight, said he also hoped that certain quarters do not misinterpret it as the commission challenging the authority of the Attorney-General.

The advice and recommendations, he said, were made during the panel's 29th meeting yesterday.

"I hope the matter isn't misinterpreted by any quarters as challenging the authority of the Attorney-General.

"I would like to stress that as per Article 145(3) of the Federal Constitution, the powers of prosecution falls under the Attorney-General," he said. ...

His reply last night ignored the statement made by the Chairman of MACC's Operation Review Panel, Tan Sri Hamid Bugo made yesterday in the day time. 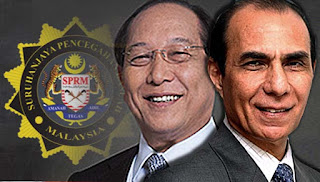 We, the undersigned, being the Chairman and two members of the Operations Review Panel ("Panel") which advises the Malaysian Anti-Corruption Commission (MACC),  expressly distance ourselves from the contents of the news report entitled "Enough proof to charge Najib over SRC, says MACC oversight committee" ("the Article") published by The Malaysian Insider earlier today.

We note that the Article cites an anonymous panel member as the source of various statements attributed to the Panel.

We wish to state that no anonymous source is authorised to speak for and on behalf of the Panel under any circumstances. In any event, we hereby expressly disassociate ourselves from all such statements attributed to the anonymous source.

We further wish to add that Panel did not at any time say that it had “enough proof to charge Najib over SRC” as claimed by the title of the Article, or that “there is credible evidence to frame charges against Datuk Seri Najib Razak”.

The Panel also did not conclude that “The MACC investigators had collected sufficient evidence to prove a prima facie case against Najib.”

However the Panel advised the MACC to complete their investigation.

We would also like to refer to the Press Statement issued by MACC yesterday that stated that “The MACC was requested by ORP to issue public statement on these issues”. We wish to state that we made no such request of the MACC. It is however up to the MACC if it wishes to issue any statement.

The TMI report meant by Hamid is below: 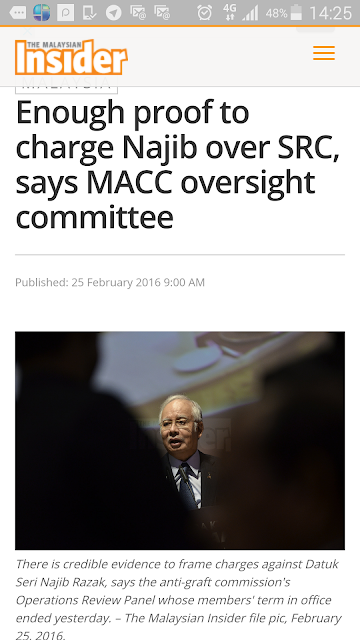 The report mentioned below:

“Insyallah (God willing), we are on the same page that Najib ought to be charged with alleged offences,” a panel member said on condition of anonymity.


"... the Oversight Review Panel of the Malaysian Anti Corruption Commission that met for the last time on the 24th February 2016 at 10am. The meeting lasted three hours and they concluded the meeting at 1pm.

Look at the time the above was released by The Malaysian Inciter – 7am! Now how did the ORP issue a statement before it even convened?"

By now, it is no secret as to who the suspected anonymous panel member. The social media is accusing Lim Chee Wee.

The MACC statement refuted by Hamid refers to the February 24th statement here, reproduced below:

Hamid has mentioned that certain part of this statement is untrue. This is a serious slap in the face on MACC. However, Abu Kassim ignored and was merely reported as "...taken note of the advice and recommendations made by the commission's Operations Review Panel..."

Already, there was a public statement made that had accused MACC of challenging AG's constitutional power to determine prosecution [read in Snapshot2016 here].

Such strange occurence should have been taken into account by Abu Kassim for it will tarnish the good name of MACC.

If Abu Kassim wants to charge Najib, he should come clean and speak out. He has often said he is only answerable and fear God. So he should not be hiding behind cliche statements. By being forthcoming, then naturally AG will be expected to be forthcoming.

Hopefully the law and rules allows for it because the public will benefit from knowing the truth on the case.

Too often public opinion are swayed by secondary opinionated and spinned reports meant to create negative perception on Najib and government.

The endless and ridiculous perception game has to stop because the intention is too obvious not with the interest of truth or justice but the pursuit of power and greed. Cheap, shallow and simplistic messages of perception play is nothing more than lies and manipulation of facts.

Pursue the truth and stop being taken in by sensationalism. Step back to read and think carefully as the matters will be much clearer. Truth will save us all.

MACC confirmed the RM2.6 billion was a donation and also said investigation on it is incomplete. Time they stop hiding and "baling batu sorok tangan". What will it be now on the RM2.6 billion: to charge or not?
at 2/26/2016 07:18:00 PM

Whoever act 'against' will bear the brunt of yours. First it was Zeti. Despite given numerous awards and appreciations from people that matters, she never liked by non matter people like u. But yes we can tolerate indifferences no matter how illogical they are

And now abu kassim. MACC was doing its work, and those work isnt in the favour of najib, then you dont like them. Why?

The cheapest trick of the protun when faced with situation without answer is to go name calling and labelling with sweeping statement. Now you are saying those against 1MDB will bear our brunt. For an admirer of a great man, do justice to him. Stop your cheap labelling psyop bull!

Do comment with a bit more depth. Zeti was a case of hypocrasy and her monetarist school of thought. You pentaksub people are so clouded in judgement just because some orang putih gave her awards. Mudah hilang your critical assessment. We may have insiders and old timers giving us leads but we make our asessment of Zeti.

Where did we bear our brunt on Abu Kassim? All we ask is he stop his psychological game and be honest. If Najib is to be charge, say so. We have not change on our stance on past position and support for MACC.

The first "critical" assessment on MACC and we are already being labelled as bearing our brunt. Cerdik lah sedikit... Put things in right perspective before mahu hantam.

Maybe Tun M is losing because what is left of his supporters are the not so clever ones. The clever ones have stooped so low to post sensational headline with curses and name calling.

There is one thinking he is a genius and started picking on us. Just shows he does not understand the game and still a novice. Orang perasan pandai begini memang tak mahu diajar pun.

Ah well ... hardly anyone reads him and hardly any follower. He speaks as though he is clever but it is all ego speaking. He hardly has network of sources to get information. Stick to twisted media sources lah.

This syok sendiri Gen Y fella from Kelantan doesn't know how idiotic he sounded by trying to be Mr I-know-all in his can come up with solution to all problem in 10sec just by listening.

He talks outside his area of expertise and got no fucking idea what goes behind a certain operation beyond what he can visually see.

Lucky PMO didn't award them their proposal. It has limited impact and cost too bloody much. Money better spent on intel than system.

Banyak sulking blogger on Tun side which malas nak cerita. To know their desperates is when they resort to name calling and labelling when their arguments fail. They think Najib days are numbered but their bluffs are revealing itself.