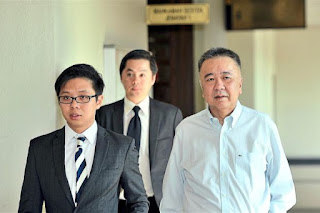 Unless one was involved in the stock market then or had memories of the Second Board rally at around the time of the Kyoto Earthquake that shook the financial market of the world in 1995, not many could remember the delisted Repco shares.

Some were reminded when the Session Court made a judgement that found Company Chairman, Dato Low Thiam Hock guilty for stock manipulation under Section 84(1) of the Securities Industry Act 1983 (SIA). Since charged on September 18 1999, it took the court 19 years to come to a decision!

There was still not much public attention despite media coverage to his judgement and several postphoned sentencing on January 19th, January 22nd and January February 15, yesterday. Yesterday's 2-hour mitigation ended up postphoned again to  February 29th.

But when RPK revealed a court exhibit which is a letter from Tun Dr Mahathir to SC Chairman, the case begin to viral. RPK's posting was questioning Tun M for inconsistency and it was an extension of his revelation of Tan Sri Mokhzani's alleged insider trading. 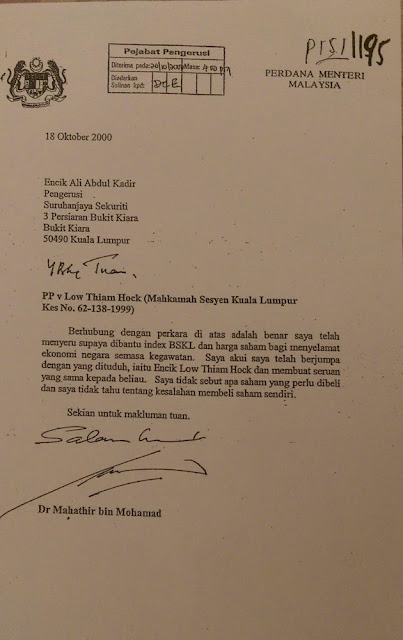 The letter was Tun M officially acknowledged meeting Dato Low Thiam Hock or popularly known in the market as Repco Low and asked him to help boost the market. He did not mentioned which stock or told Repco Low to do anything illegal so it covers him legally.

However, market player would have presumed it as a consent to rig the market.

Thus for LSS accusation that Tun M was cavorting with Low in stock manipulation activities on the alleged incident in September 1997.

The letter was dated October 18, 2000. The letter was addressed to the then SC Chairman Encik Ali Kadir (now a Datok) and chopped receipt on October 20, 2000. All after the event and before SC charged Repco Low.

The Repco shares attracted quite an attention because Sime Bank (now acquired from Sime Darby and merged to be RHB Bank) suffered serious loss. As a result Sime Darby gave up on banking and sold it to never ever involve in financial services ever.

The interesting part of this latter is why Ali Kadir still charged Repco Low despite the letter from then PM Dato Seri Dr Mahathir Mohamed (now off course Tun M).

Ali Kadir would have understood that Tun M is subtly saying he is my man and he is doing national service at my request. Lay off!

Why did he still charge?

Off course, not many realised this.

The Finance Minister then was Mahathir-appointed Dato Seri Anwar Ibrahim. The political animal Anwar have been placing his men everywhere in government and GLC. So he would surely have placed his man in all organisation under MOF, especially SC.

SC was one organisation his people are well entrenched.

The first SC Chairman was artist Botelli afficianado, Tan Sri Munir Majid. He was on the Board of Director of Yayasan Bumiputera Pulau Pinang. Only Anwar people would have been Board member of an Anwar initiative.

Munir was replaced by Ali Kadir.

Though son of first female Minister of Malaysia, Tan Sri Fatimah and first Malaysian AG, Tan Sri Ali Kadir, he was an Anwar man. He does not bother of Tun M's letter but only of Anwar's instruction.

It was only years later that his true colors surfaced in his critical comments and columns in The Malaysian Insider. It is not a norm for man of his standing to be critical of Government. Here is an example. At a time, Anwar was in opposition, Ali's comment can be contrued then as pro-opposition. 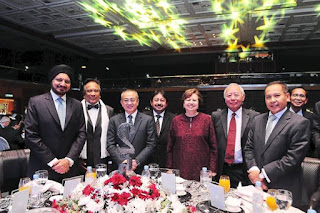 From Munir to Ali days, the stealth Anwar operation in SC have been at work. The proofs will come at a latter posting but the likes of current Chairman Ranjit Singh and even DPP for SC,  Roz Mawar Rozain are pro-Anwar and possibly these days pro-PKR.

Anwar then needed to clean his name of the Repco and Sime Bank mess. So he insisted on SC to charge Repco Low.

Repco was known in the market to befriend Anwar and at the same time, close to Tun M. That was till the fallout on the Sandakan Turf Club (STC), which another Anwar man, the infamous Duta Yap wanted.

Anwar planned to give STC to Duta Yap and the plan was to inject STC into Mycom but Sabah government failed the plan. They accused Repco of failing the plan.

We remembered one Director of Mycom who was a Muslim and quite a familiar corporate name. It was told to us that he opted out the moment the acquirer of his PLC, was going to change name to Mycom and turned it into a gambling counter.

SC was reported to investigate Mycom for the shares spiked. It was told to us that only minutes after the meeting the deal was consumated, the shares run-up. Since Duta Yap was an Anwar man, SC did nothing.

We had a chat with the corporate player two days after the shares spiked. 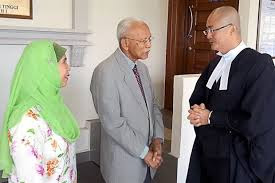 Back then, we had a personal experience and interest in the Repco case.

Sime Bank had to pump money into Sime Securities. Otherwise, it could not meet the minimum liquid fund (MLF) requirement of stockbroker and that would have affected Sime Bank's financially and operationally.

With consent (and believe there was circular resolution to authorise) from the Board of Directors of Sime Bank, then Sime Bank CEO, Dato Ismail Zakaria directed the Bank to pump about RM700 million (if memory does not fail us) into Sime Securities.

Sime Darby was pretty much a blue blood Malaysian company but British aristo at heart. The Board members started to wash their hands and looks to gang up against Ismail Zakaria (IZ). So IZ was charged by Bank Negara.

Economy was bad and nothing much to be done except hear sad stories. Without nothing to do then, we and our former partner attended court daily as a moral support to IZ.  He helped finance one of our deal and it was fully paid back.

IZ was a former boss at Maybank. His last post was Joint Executive Director with Tan Sri Ahmad Don for a while till Ahmad took up post as Managing Director. IZ was invited to head D&C and later through several Banks M&A, it became Sime Bank.

We lost track of the case after that. Heard it is still a long on-going case like that of Repco. [See Google Search here] It is at it's 18th year.

The fun part of the case was that there were lots of ex-Maybanker and ex-MRSMs either are involved or related to the accused. They were there attending the case or standing by as witnesses.

The assigned broker to Repco Low was a senior by the name Shahruddin Saadon, son of a former Director of KUBB. We only knew then that our batchmate was IZ's niece. Small world ....

There have been lots of conversations and information shared in between court in sessions.

The case is something else and maybe Repco is as popular known to be Raja Goreng but for the particular transaction as charged in court, we were told that the purchases were legit. Sime Bank cannot sue him so presumably Sime Darby take it out on IZ.

In both cases, Repco and IZ was acquited but prosecution appealed.

Never do I argue with a man with a desire to hear him say what is wrong, or to expose him and win victory over him.
Whenever I face an opponent in debate[b] I silently pray[/b] -
'O Lord, help him so that truth may flow from his heart and on his tongue, and so that if truth is on my side, he may follow me; and if truth be on his side, I may follow him.' "

Anonymous said...
This comment has been removed by a blog administrator.
12:47 PM

Rupert murdoch is your source. What credibility is that? Sorry it has nothing to do with the subject of this posting. Sorry no trolls!