The body of the Allahyarham Manan was taken home to his eldest son home in Sri Hartamas. It will be taken to Masjid Bukit Damansara at 8:30 AM this morning for obligatory religious rituals. The planned burial is scheduled before zohor.

Born in 1935, Allahyarham studied at the illustrious Malay College Kuala Kangsar. He studied law and his early career was in the legal service before joining the Terengganu state government and eventually politics. [read here]

Allahyarham was a Member of Parliament for Kuala Terengganu from 1978 to 1994. [read Wikipedia here]. 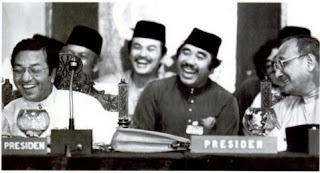 He was the Public Enterprise Minister in Tun Hussein Onn cabinet and continued in Tun Dr Mahathir's cabinet till UMNO split into Team A and Team B in the late 1980s.

When UMNO was declared illegal and a new UMNO was established, the Team B faction was not invited in. Led by Tengku Razaleigh Hamzah, Team B formed the Parti Melayu Semangat 46 in 1988.

Allahyarham was serving as Minister of Agriculture in Manathir's cabinet but as a matter of principle, he rejected the Cabinet Minister offer from Mahathir after Team B lost in the party election in 1987. It was said he told Mahathir it does not feel as good to be in his cabinet.

Allahyarham  was among the few cabinet members that joined Ku Li: 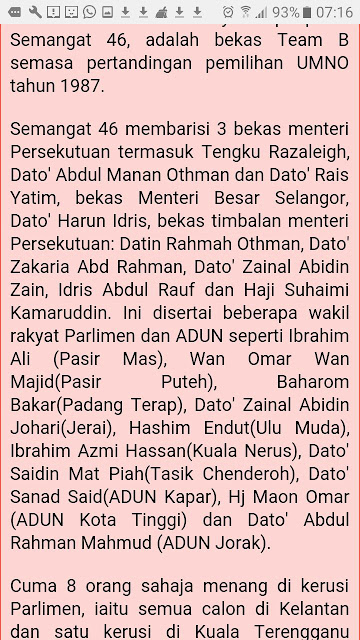 After losing his Kuala Terengganu seat to BN in 1990, Allahyarham was not as active in politics. Together wwith Ku Li, he rejoined UMNO in 1996.

Eventually, he faded away and retired but remain close friend with Ku Li. He can be often seen with Ku Li for Friday prayers together at the Masjid in Kg Pandan.

Yours truly last saw of Manan at a breaking fast in one private surau in Bukit Mas, Taman Melawati few years ago. He was praying on a chair next to the host.

Another ole guard has left us but the nation's politic is still stuck in old quarrels based on old ideas and beliefs. It is time they let go.