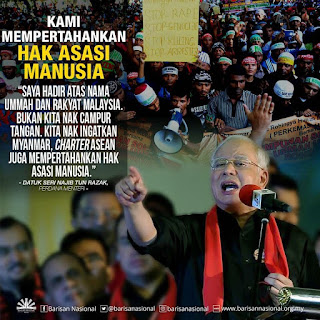 There were many sceptics of Malaysia effort to champion the Rohingya.

Naturally, they presumed it was politically motivated since the joint UMNO-PAS assembly at Lake Titiwangsa was organised after UMNO's General Assembly at end of 2016.

Media such as FMT and Malaysiakini published sceptical views taking the inconsistency angle and are quick to report on Myanmar responses like this one here.

There are those claiming Malaysia had to tone down its aggressive stance after the OIC meeting recently. Malaysia offered Rohinga RM10 million fund to help rehabilitate Rakhine state. There was offering of friendship from Dato Najib [read here].

Lo and behold! The effort of Dato Najib, Dato Anifah and  Wisma Putera has not gone to waste. This news in Bangkok Post, below:


YANGON: The UN Human Rights envoy to Myanmar, Yanghee Lee, says the country's government will lose credibility if it continues to defend the reported human rights abuses against Rohingya Muslims.

Speaking at a news briefing held in Yangon at the end of her 12-day visit to the country, Lee said the Myanmar government led by Nobel peace laureate Aung San Suu Kyi would "appear less and less credible" if it continues being defensive in response to allegations of persistently reported serious human rights violations.

Lee arrived in Myanmar on Jan 8 to assess the recent developments in the human rights situation in the country, especially in conflict-riddled Rakhine State. Human rights abuses by security forces were reported there as the military conducts "clearance operations" following coordinated attacks by hundreds of Muslims in the area on border guard outposts that left nine police officers dead.

It was the fifth visit by the 60-year-old South Korean university professor since she became "special rapporteur on the human rights situation in Myanmar" in 2014.

Lee toured Maungdaw in northern Rakhine state for four days, visiting the villages and sites of attacks and human rights abuses and meeting representatives of the Muslim community who calls themselves Rohingya as well as government officials and senior police officials to gather facts for her report, to be submitted to the UN Human Rights Council in March 2017.

After returning from the tour, Lee met privately with Suu Kyi in the capital Nay Pyi Daw on Wednesday to discuss the security situation in northern Rakhine, which has been under lockdown since the October attacks.

Widespread reports of security forces committing atrocities against Rohingya Muslims have emerged as the military conducts operations in the area following the attacks, raiding Muslim villages to search for the culprits and recover lost arms.

But the government has been persistently denying virtually all the reports as fabricated news, while preventing the media and international observers from accessing the area.

Lee said the government's current response to all of these problems seems to be to defend, dismiss and deny, which is not only counterproductive but also drains away optimism in the country.

"But I do believe it is not too late to reverse this trend, and during my visit, I also met many people who are doing their best in very difficult situations. I met groups working tirelessly to bring communities together," Lee added.

Reading her statement to the meia on Friday, Lee condemned the deadly Oct 9 attacks on the border guard posts, but said the persistent ill-treatment of the population in the area should be considered.

"I must remind again that these attacks took place in the context of decades of systematic and institutionalised discrimination against the Rohingya population," she said.

Lee said that the government should ensure justice, accountability and the rule of law, to improve the situation in Rakhine state.

Lee said she found during her visit that the optimism of the people in Myanmar was fading slowly, a year after the historic landslide election win by Suu Kyi's National League for Democracy that has since formed the current government.

"It pains me to see when talking to the ordinary people during this visit their feelings of optimism and hope slowly fading just after one year when the whole country was elated with the outcome of the last general elections," she said.

The envoy, however, expressed optimism, saying government officials are committed to improve the situation.

"From my meetings and conversations with the state counsellor and various officials, I can see their genuine commitment and dedication in improving the lives of all in Myanmar," she sai.

"Somehow, this commitment has yet to translate into real actions that are felt on the ground.

"I encourage the government to appeal to communities in the country to be more open and have understanding of each other, to respect each other, instead of scapegoating others for the sake of advancing their own self-interests."

While Rakhine State has long been affected by conflicts between ethnic Buddhists and the growing population of minority Muslims there, the latest round of violence in October further escalated the existing tension between the two sides.

The military "clearance operations" caused tens of thousands of people to flee their homes. Nearly 100 people, including 17 security officers, have been killed since the Oct 9 attacks.

The United Nations has said around 65,000 Rohingya Muslim villagers from northern Rakhine have fled across the border into Bangladesh over the past three months.

During her trip, Lee also visited the country's northern Kachin State and met with villagers at camps displaced by the ongoing civil war between the military and ethnic Kachin rebels.

Lee said the conditions in Kachin and the northern borders were also deteriorating, saying the situation is now "worse than any point in the past three years".

"The situation is now such that even in Myitkyina, the capital of the state and home to over 300,000 people, residents are afraid and now stay home after dark," she said. 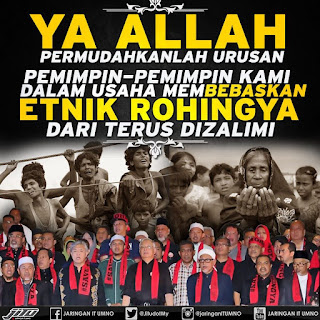 If Myamnar continue to be in-denial [read Bung Nagara here], more drastic steps will be taken by both United Nations and ASEAN. Really drastic......

The reason is simple, people just cant accept if a "thief" like Najib trying to show good.

This posting is about human rights but you are still stuck in partisan politics.

Should get your head examined.