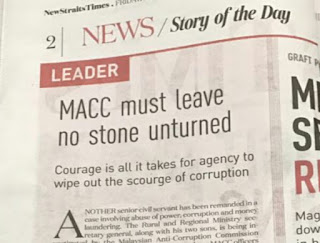 It is not Farrah Naz Karim's column expressing frustration to see organisations signing Integrity Pledge as initiated by Tan Sri Abu Kassim ended up embroiled in one corruption scandal after another. She suggested an annual asset profiling and polygraph test on those in critical position [read her here].

It is the editor's column entitled "MACC must leave no stone unturned" that is troubling. It's a common phrase and not the first time MACC is the subject. TI Malaysia used that phrase on the PKFZ scandal in 2009. Dato Dr Jeffrey Kitingan on fake native cert in Sabah happening since the 1980s.

That happened in a past administration but in 2012, The Star used the same phrase to refer to dishonest civil servants in government agencies behind the illegal forest clearing that resulted in a catastrophic landslide in Cameron Highland. It is such calls by the media that MACC is acting on.

To demand more aggressive action by MACC, surely NST is aware MACC's Director of Investigation, Dato Azam Baki said in the past that Dato Najib was questioned in the SRC investigation.

Hopefully, it is co-incidental that there are recent reports by FMT and Malaysiakini on alleged un-civil servant-like comment by retiring Dato Bahri to lead back to the SRC case.

If Bahri acted in such a manner, one can only be reminded of his similar outburst in the past, which was suspiciously scripted and orchestrated by his then superior [read Bigdog's February 2016 posting here].

Dato Dzulkifli's predecessor is still on MACC's payroll. He is seconded to a temporary teaching assignment in Shah Alam and would be assuming a position abroad.

It is unfathomable that he should be part of any attempt for a comeback or bizarre conspiracy theory he is hands in glove with his former detractors.

Let bygones be bygones because the institution is more important than an individual [read past postings here and here]. The concern is not about 1MDB or SRC only, which is taking its due course.

NST's editorial will give the wrong impression to the public. As it is, opposition and colluding former officials successfully painted an image MACC and it's predecessor, the ACA are wrongly used to cover-up executive abuses.

In this age of transparency, openness and free media, MACC should not be abused for political agenda, be it against the opposition or a certain past leader and his band of "friends" or competing groups within the ruling party.

Pardon the cliche but without fear or favour.

To imply the current leadership in MACC lacked courage, it is (an) unrealistic and could lead to a suspicion there is a sinister political motive behind it.

Courage is something not in short supply under the current leadership and team at MACC.

Has there ever in the history of fighting corruption in Malaysia of a KSU or Ministry Secretary General taken in for investigation and house raided?

Former MACC Commissioner, Tan Sri Abu Kassim gave the impression he dare not mess with the PTD Mafia in a briefing he once held for media.

Back in Mahathir's days, Sabah Watergate would have been a cover-up to divert political fallout against the ruling party instead of any charge made in court.

No Tan Sri, Dato Seri or ordinary Datok is spared. So there is ruthless efficiency in their effort. What is then the real beef and who is not happy?

To claim MACC is not taking on the politicians, it is a surprise. What happenned in the past and what is happening today?

The current Chief Commissioner is barely five months in his job. So far, every warnings of his are followed through. Believe he knows what he is doing and he has a strategy to combat corruption.

Great coach like Jose Mourinho need time to even turn a great team with tradition to be cup winners.

Dzulkifli is on a 5-year term so support him and not kacau by trying to tell him what to do. Most commenting hardly knows head or tail of law enforcement and only have expected outcome.

It must have started from sometime in the past. Combating it cannot happen overnight. 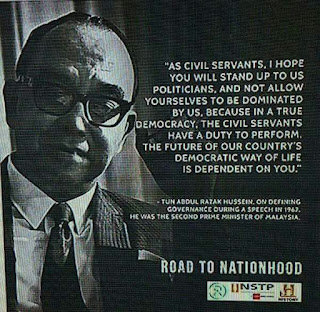 Politicians are easy meat to go after. Addressing corruption in the civil service is fundamentally more important and strategic.

Instead of putting unnecessary "political" undue pressure, NST should be championing the cause of MACC and other enforcement agencies that are operating under slashed budget and in dire need for more capable investigators.

MACC had their budget cut twice for 2016 and 2017 from RM294 million to RM251 million and finally to RM216 million [read FMT here]. It is fair on Lim Kit Siang to accuse government has no commitment to fight corruption and plug various other leakages in the system.

The bulk of budget is staff renumeration, thus it leaves little room to cover cost of investigation. An investigation on Sabah Watergate could be more than RM1 million, not surprising to run up to RM1.5 million. The 3-month "Jalan Pinhorn" investigation should easily cost more than RM300,000. 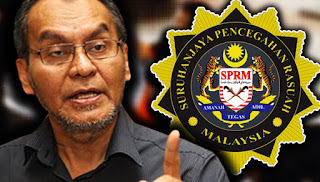 So when a youth wing of an NGO demanded MACC undertake their own prosecution, hope he could do a donation drive to help.

For Amanah's Dr Dzulkifli to make a similar call for MACC's independence [read FMT here], it is a genuine concern but hardly a solution.

It only create another powerful little Napolean because the power would still be in the hands of the few. When judgement is required, it is inevitable.

Better suggestion is an American style taskforce involving the District Attorney and investigators together. But that require a major overhaul in the system. Since turned into a Commission in 2009, MACC is still a work-in-progress.

Be it NGOs (quite a number are political NGOs) or politicians, discourse or demands relating to corruption or corruption prevention in Malaysia is seldom politically motivated.

When politics is involved, outrightly or subtly, there will always be inconsistencies and hypocrasies. To fight corruption, it is best be left outside the political sphere. Public must abhor politicising corruption.

Off course, public must come out and support MACC with information and leads, especially any wrongdoing within their own organisation first.

The one reason Hong Kong's ICAC is successful is because they impress on the public that the few known termites in the organisation they are working will flourish to destroy their rice bowl.

If civil servants understand, it means their Department or Agency could be closed up and they be out of job. There is already call to slash the number of civil servants.
at 1/08/2017 11:02:00 AM