Mahathir stuck in the past and present 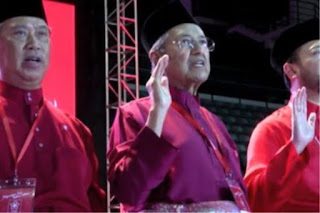 Prior to the GE 13, DAP and PAS was working hard to instigate local Pengerang folks against the proposed Pengerang Petronas Refinery and Petrochemical Integrated Development (RAPID).

PAS worked on the Malay kampong folks. While, DAP instigate the Chinese in the pekan area.

Apparently, DAP received help from Singaporean volunteers. One can understand Singapore seeing RAPID as competition. From Pengerang, Singapore is only few hundred metres away and ships can be seen from end to end. [Read past posting here.]

DAP extended their role to send lobbyist to Taiwan. They created a fictitous environmental issue and went public to pressure a Taiwanese investors till they pulled out from an announced pan to to set up petrochemical plant.

By right, local Pengerang folks should do a class action against DAP.

The extend Tun Dr Mahathir is ranting against China investors is practically emulating what DAP did at RAPID.

Initially, he created a political lie to make the allegation that 700,000 Chinese from China will be voting in the next GE 14. He is emulating a similar Anwar Ibrahim lie during GE 13 claiming 40,000 Bangla Deshi voted in the last GE13.

Mahathir's propagandist team must be running out of ideas that they have to copy Anwar Ibrahim. Already they failed to do their economic fear factor because they are intellectually and academically inadequate.

The burden to do the economic fear factor is left to Mahathir himself.

The 700,000 Chinese allegation has been debunked. Today, his highness the Sultan of Johor rebuffed him on that point again and his inference to the Forest City project in Iskandar, Johor [read here].

In addition, Tuanku challenged Mahathir to bring in investors from Arab countries, Australia or the United States to Johor instead of his racist inclined China bashing [read here].

Look who is selling? 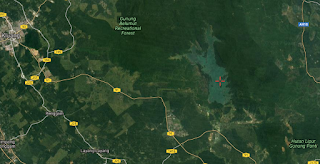 Tan Sri Muhyiddin recently joined the foray in support of Mahathir in an interview with Sin Chew Daily to accuse China investors are denying the people's ricebowl.

MITI Minister Dato Mustapha Mohamed clarified to highlight the largest investor in the country is not China but US, Japan and Germany.

If China wish to invest, the argument by the Sultan is why should we stop them? His highness asked is it because they are Chinese by race?

Raja Petra argued the racism against China's Chinese is coming from none other than the local Chinese themselves [read here]. There could be some truth as it could be a response to China's Chinese negative view of overseas Chinese. Most widely known is referring to Singaporeans as a yellow banana.

That should clear up the wrong impression the Chinese Ambassador is defending local Chinese against the Red March sometime years ago.

His excellency was only protecting China Chinese nationals.

The China bashing statement by Muhyiddin was rebutted by Chinese Embassy as an attempt to instigate hatred against China [read statement in full here]. 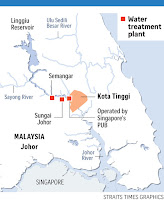 Unfortunately, Muhyiddin is the most unsuitable person to champion these political line. He himself is saddled with the same negative perception of selling land away to Singaporeans.

The joke in JB back then was he cried when passing by the Mahmoodiah royal cemetary. That large track of land could not be put up for sale.

The instruction to give away the 50,000 hectare land came from no other than Mahathir himself. It was part of long term cheap water deal for Singapare. Yet he used the water rhetoric to accuse Pak Lah of selling out to Singaporeans.

Dato Ibrahim Ali and Tamrin Tun Ghaffar used to hit at Muhyiddin on this water catchment issue in their political campaign for the opposition.

Ironically, it was Muhyiddin himself that was seeking China's investment in an official trip in 2012.

Despite the response from China Embassy, Mahathir insist in playing the "jual negara" (selling the country) line for his politics with China as his target.

He ignored his past position to support China [read MD here].

It only strengthened the suspicion he is now hand in glove with US operatives and George Soros.

This "jual negara" line have long been used by Dato Najib's political detractors. It is heard this line was also used by some departed family member against him.

Mahathir seized on this through a posting he made on FDI early this month [read here].

His argument was rebutted by LSS who argued that Mahathir is harping on an old manufacturing FDI model that require foreign labour to sustain.

For political expediency, he intentionally forget he planned for the shift away from low cost and labour intensive manufacturing for services in mid-90s [read in here].

The mentioned sectors were financial, property, and transportation.

Dato Seri Salleh Said Keruak rebutted Mahathir to describe him as inconsistent and living in the past. He is no more Prime Minister for more than 14 years [read here and here].

Mahathir is insistent based on the definition of FDI as:


Investment made by a company or individual in one country in business interests in another country, in the form of either establishing business operations or acquiring business assets in the other country, such as ownership or controlling interest in a foreign company.

It is well and good but FDI is not only the avenue for investment.

Since Malaysia is a major player in Islamic finance, which is the service sector Mahathir wanted to move to, he did not highlight investment in the form of portfolio, capital market and properties.

Much of the properties investment ties together with REIT.

Since Mahathir is only playing politics, he should explain Raja Petra inquiries as to whether it was any different when he "sold the country" to Taiwanese, Koreans and Japanese in the past. [read here]

Mahathir is not someone who will apologise despite a U-turn in his position to call BR1M as corruption. He will not admit defeat too.

When he is still adamant with the FDI and China bashing in his PPBM launching speech, he must be thinking of sabotaging more than a petrochemical plant. Yet his speech is filled with his old school nationalism lines of patriotism [read here].

No one working with Soros can be considered patriotic.

Much of China investment or Mahathir insisted as Malaysia borrowing are in public infrastructure. All over the world, ports or railway lines, or highways are owned by government. Contractor and operator could be outsourced. What is the worrry?

Apparently an Engineer turned socio-economist activist argued Sri Lanka had to secede territory for failing to pay China. Malaysia is not of the same level as Sri Lanka in economic management, economic performance and experience in financial knowledge.

This bloke need to figure out what does he want? He is against TPPA and now against China. Better stick to engineering than trade and foreign policies.

The snapshot view is useful. However, the long term view with continuous changing snapshots and fluid geo-global politics, social, and economic landscape is more important.

As it is, the future is more important that the past and present. .

In 2002, Mahathir launch My 2nd Home (MM2H) to get foreigners to buy high end properties particularly in Langkawi.

As MB, Muhyidfin lowered the minimal home cost to RM250,000 for foreigner to buy home in JB during property slump.

Why the inconsistent views? Please lah practise mature politics. Be consistent their stand.

Now they are silent on 1MDB but more conjuring up economic fear factor which could railroad transformation plan, stifle growth and sabotage ringgit.

During Muhyiddin's MB or Dr.M's 2002, there was no massive debt incurred through 1MDB-Jho Low. Contractors, workers and supplies was not brought-in from Mainland China to build homes. Whatever homes available for sale to foreigners or that of which the home-cost was lowered, are unsold to locals.

Now... Forest City is different. The whole swath of reclaimed land was specifically allocated to woo foreign ownership, freehold at that. (If its on lease for a 100 years, then I can accept).
On a 'Rakyat diDahulukan' rhetoric, they even came-up with the HSC project. 'Just a stone-throw away from Singapore as an advertising attraction, connecting it with and KL's Bandar Malaysia, already 40% owned by China, in 90 minutes. (Then maybe later, they can balik-kampung to Kunming and other parts of China via Thailand & Laos.)
Najib even said that 'one can have breakfast in Singapore, lunch in KL and dinner, back in Singapore. Awesome!

Anyway, lets wait until more Forest City home-owners go for shopping in Tesco or Giant with their pet Chihuahuas in trolleys. Then we will see what Bangsa Johor's DYMM Sultan, Najib or his Menteri-Agama had to say.

Me... I'm not'jijik' of pigs or dogs, whatsoever. I grew-up in the North where the Siamese use to rear pigs as the Malays do, goats. Therefore, I can even have my own meal at the same table with friends who are having grilled pig-leg.
I'm more concerned or 'jijik' of stain on money and gas cylinders. Only God knows where they came from. Was it from transaction in pork-butcher's stall or the gas-cylinder was previously used in a restaurant which fried pork?
And that was why I always insist on buying cylinder-gas on my own, so I can wipe its greased shell, clean.

- There is no need to sabotage the Ringgit. Najib and his kleptocratic regime is doing it just fine. If you want to strengthen the Ringgit, at least to the same depreciation level of Baht & Rupiah, ... get rid of UMNO-Najib.

- That 1MDB thing would come 'alive', once Trump, Swiss AG, Singapore's court or other kapir countries decide to sent out an Interpol's warrant of arrest on Jho Low.
Surely... it will come 'alive' too during the campaign for GE14. Razak Baginda/Altantuya, Deepak Carpet to will come 'alive'... every GE... as long as Najib is PM.