Does Idris Haron's arrogance stem from insecurity or guilt? 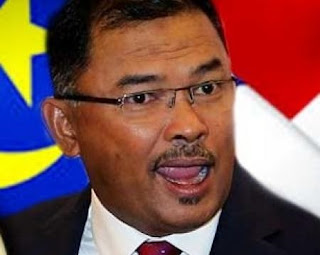 Arrogance could indicate insecurity or guilt. Insecure people put up psychological defense like arrogance to hide their shortcoming.

A quote from a Christian shareslide described:


Guilty is an arrogant pre-occupation wth self which ignores the fallibility and deprevity of other men. It often stems from a sense of superiority over others in belief that one will not falter as others do.

One UMNO veteran in Malacca said Dato Idris Haron was advised and cautioned by his political mentors and veterans on certain of his actions and behaviours.

But he arrogantly shrugged them off by saying, "I know what I am doing".

It is as arrogant as his statement when asked by reporters on the environment issues relating with the Kuala Linggi International Port [read here].

He is not guilty of any act of corruption. Yesterday's appearance of MACC officers at his office was not to investigate him as he explained and was reported by NST here.

MACC too explained they were there to record his statement. [Read NST here].

It is the same procedure done by MACC to record initially statement from Lim Guan Eng and also Dato Najib Tun Abdul Razak.

If there are compelling evidences and leads, then there will be "follow-ups", including the "follow-up" Guan Eng is due to do in March.

There are those that have been detained for investigation that have to do monthly visit "follow-up" to MACC.

The concern is why is Idris arrogant with both MACC and NST as reported yesterday here.

Apparently, the appointment with MACC is supposed to be 2 PM but he made them wait.

NST reported MACC was through with him and left the office at 6 PM with boxes of documents. Sources from Malacca claimed MACC left at 8 PM!

Idris was aware of NST enquiry as told by his press secretary at 9 PM. He made them wait too and only responded at midnight!

If "I know what I am doing", one do not need to rehearse so long to give a reply.

Idris has to be more respectful of people. If his predecessor, Tan Sri Ali Rustam could be seen willing to wait with other VIPs to receive his arrival, that should have been taken as a lesson in humility.

And there is the much talked about Mercedes Benz S400.

Too many complains by Malaccans of his arrogance.

It is natural for people to compare him with the people friendly Ali but he cannot be oblivion to peoples' expectation and act "suka hati dia".

Ali is transparent in his ways but Idris is inviting suspicion by keeping himself within a small group of inner circle.

He is inviting people to speculate that he is keeping things including government contracts within a small group of people.

Idris may not be aware but people on the ground are saying any dealing with state governments that requires CM's concurrence must go through or involve such characters as Yusof Soros or Rosli Botak.

All government contracts has its toll gate and collectors, not sure what it means.

Apparently, Yusof Soros and JKR Director were detained by MACC for investigation. Thus far, the JKR Director is charged twice for corruption and money laundering. He can't account his wealth kept at home.

The Kopitiams in Malacca have been filled with conversations by businessmen, contractors, consultants, surveyors and all those related to land reclamation works of contracts being given to certain sets of personalities and resold back for commission to certain taukeh-taukeh cina.

Anything untowards happening in Malaysia including our nephews still born Mancun cats can be blamed to Najib. Same goes with happenings in Malacca.

Idris should realise whatever his boys do, he will be under scrutiny and get blamed.

Early in his CM-ship, there were rumours circulating to accuse his boys as being behind illegal online gambling outlets in Alor Gajah.

Instead of clarifying the situation, he gave a stern statement and intend to make a police report or was it to sue the source of the rumour.

There maybe nothing there but such reaction is not seen favourably. It did not stem the rumour and in fact, it had proliferated into his boys controlling all online gambling in the state.

People in Malacca are claiming he is the most unfriendly CM.

They complain he is late for functions and hardly give time to talk to either public or even the political leaders.

Ali allowed his official residence to be open daily till late in the night for activities involving the public. Idris did not allow but that is his right.

It only made the public conjure up the perception Idris only keep himself within his close coterie of people.

Idris must learn to listen and do lots of muhassabah or self reflection. He must change.

It is commonly told by Malaccan that "orang Melaka" wants him investigated for corruption and insist Najib select a new CM.

Get anyone - even if the suitable person is a newbie with no position in any UMNO Division, as long as it is no more Idris.

That shows how furious people are with you, Idris!

Idris is that stupid actually. This cross eyed monkey will cross over to the other side when his party collapsed.

Every single politician think for themself and thiere crony,it happen all over malaysia sorry to tell all politician in malaysia are corrupted in thiere mind only how to make money they dont care about nitizen who are suffer because of them this are the fact happen in malaysia