Why too long to charge this "orang UMNO"? 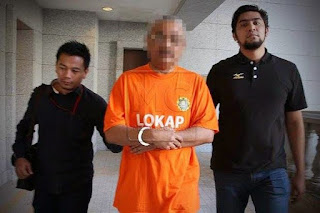 The previous posting is written out of a deep appreciation for what MACC is trying to do and doing it under the most difficult condition.

In the past and some will still insist the present, charging politicians can be tricky. They do not have the implementing power but merely policy maker and monitoring role.

It is made more difficult because politicians have supporters and they put unnecessary pressure on MACC.

When it is down to the crunch, public do not defend or support MACC. The case of Teoh Beng Hock and Lim Guan Eng comes to mind.

There are also cases involving UMNO leaders that made UMNO supporters behave like DAP supporterss.

Public could be easily duped into the emotional game and whack MACC without thinking of the greater good. To some extend, it made them cautious. 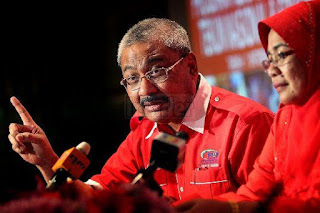 Rocky Bru alerted in his blog yesterday here to an NST link here.

In the extract below, one can see the amount is small but the act is despicable and inhuman: 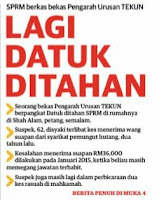 According to an MACC source, the 62-year-old suspect, with a ‘Datuk’ title, was arrested at his home in Bukit Bandaraya, Shah Alam, at 5.15pm yesterday, after returning from an umrah trip.

He is suspected of having accepted the bribe in exchange for speeding up the claims payment process of a debt collector company, amounting to RM360,009.08, on Jan 15, 2015.

The suspect was arrested at the Shah Alam Club while receiving the money from the owner of the debt collector company.

The MACC source said the suspect, who held the two positions from 2008 to 2014, had appointed a company allegedly to collect bad debts from a borrower who had two years’ worth of arrears.

The bribe comprised 10 per cent of the proceeds of Tekun Nasional Bad Debts for Nov 2014.

He was caught in the act at Kelab Shah Alam Selangor in January 2015. [Read this news in a forum website here.]

It happenned during the leadership of Tan Sri Abu Kassim and Attorney General then was Tan Sri Gani Patail. Why does it take so long to charge a case that should be over and done with?

MACC may not have the benefit of knowing this guy as this blogger do.

But they do not need to second guess themselves. Dato Haji Abdul Rahim Hassan was charged on November 27th 2015 for two counts of corruption to approve RM100,000 loan to his son-in-law [Read Utusan Malaysia and mStar here and here].

How could the court allowed him to leave the country to perform umrah?

Rahim send bouncer and allegedly took a cut for those few thousand ringgit defaulter. TEKUN is meant for agriculture and agro-business.

Instead of helping "farmers", he gave his family member one lakh! Off course, Rahim is innocent until proven guilty but he is no angel. No CEO of the year award or great resume can change that fact.

This blogger's encounter was in a previous employment of Rahim to assist young entrepreneur.

They were bullied in their dealing with elderly top officials in a government agency.

After several meetings, it was obvious Rahim had intention to manouvre out the entrepreneur. The suspicion he was trying to give it to his "cronies".

When asked why is he manipulative and smooth talk, the entreprenuer said he only found out Rahim is an UMNO member from Penang.

In one of the UMNO general assembly this blogger attended, he was present as delegate.

We bump into each other and he pretended not to know. When approached, the arrogant bastard was not interested to be reacquinted.

Fine ... at another occasion and it was one of those Malay issue discource, this blogger bumped into each other again. He put up a fake courteousy in the presence of a host, a VVIP who gave us some slack.

There have been many occasions and he is only friendly when it warrants. One can size him as arrogant and opportunistic.

And, arrogance could indicate insecurity or guilt. True enough, he had made several stupid public statement and con job with a known Prof Dr conman.

His "endeavours" in TEKUN had long been known.

It was former Chairman Dato Hamidah Osman that exposed his wrongdoings in TEKUN. However, she ended up being replaced.

TEKUN was previously under the "Entrepreneurship" Ministry before transfered to  Ministry of Agriculture. The MOA Minister then was Dato Ismail Sabri.

Hamidah's replacement could likely be due to Ismail wanting to put his own trusted people. However, he ended up being accused of protecting Rahim and even the sacking of Hamidah from UMNO.

Ismail is now under the spotlight because Dato Ariff Rahman is his KSU and he brought him from a TKSU at MOA to KKLW to be KSU.

Those in the know will not blame Ismail for the Sabah Watergate. However, he should show seriousness to address the weak monitoring and control within KKLW.

Hamidah is now PPBM's protem Vice President. TEKUN could be one of many to break the camel's back and made her willing to work together with former foes - Ngeh, Ngah and Nizar. [Read past posting here].

To conclude this analysis, Rahim seemed to be a protective species. Who is protecting him? Who helped to cover him up? Why is he so important to be covered up?

It only proves current team at MACC have no fear or favour. 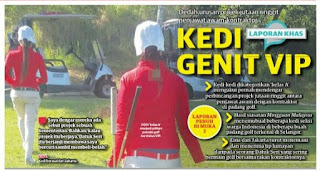 Interesting that Awang Selamat in his Mingguan Malaysia column yesterday mentioned below:

Most are taken by the story on cute golf caddies and ratusan juta deals on golf course abroad now facing business slowdown.

Maybe Utusan knows something big is coming up from this golf expose.

This blog mentioned in the previous posting of another Chief Minister should be apprehended with the intention to only prove a point:


To claim MACC is not taking on the politicians, it is a surprise. What happened in the past and what is happening today?

If it does happen and involves a BN-ruled state, it would be good. Then some opposition leaders can be apprehended too.

With general election drawing near, many yokos are going around claiming they are helping to raise campaign fund to boost the chances of their tender.

While, the hotshots are putting together big corporate deals with federal or state government for only big payouts and not necessary for any political party's campaign coffer!

This fella Rahim was a Chairman YPM. Was he involved and sent to Tekun to cover him up?