Better not be Rais but a judge 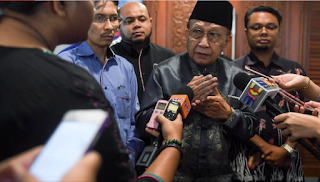 Pakatan Harapan leaders met last Sunday to discuss the appointment of the Speaker for Dewan Rakyat i.e. Parliament. The announcement is expected today or tomorrow, if Tun Dr Mahathir is still trying to manouvre his way.

For quite sometime, words have been going around that Mahathir wanted Tan Sri Rais Yatim to be appointed Speaker but was resisted by the other leaders of PH. Sources claimed Mahathir asked for UMNO support from Dato Seri Dr Ahmad Zahid Hamidi in the meeting at Yayasan Kepimpinan Perdana prior to the party election together with his offer for UMNO MPs to join PPBM.

These days many loyal members of UMNO are questioning the loyalty-bility of their leaders and elected wakil rakyat, who could selfishly jump ship without giving due consideration to those who supported and voted for them. The selfish and betrayal acts of politicians raise concern of their integrity.

Though it is not the main concern in the third world politics of Malaysia, where political pundits are in awed with the slight of hands in the manouvering of politicians, irrespective whether it is morally and ethically correct, Zahid knew that it was inappropriate.

Be that as it may, PH government will find it hard to claim they are creating a new Malaysia with a highly inappropriate choice as Speaker. They should not choose Rais.

A friend shared his conversation with a DAP leader. It was revealed that Rais lobbied for the Speaker position with Mahathir.

Rais was sacked from UMNO for his critics of the then government and party leadership, in which such act before a general election is obviously campaigning for the other side. It is a serious act of  betrayal and Zahid was right.

When his time was up, he resisted and Dato Najib relented with a Ministerial status appointment as Rector of International Islamic University. Prior to the GE14, he was still lobbying to be BN candidate to replace his successor in Jelebu, his late Political Secretary Dato Zainuddin.

Failing which, it may have motivated him to jump over to PPBM after GE14.

The DAP leader speculated "Rais knows his skeletons in the closet would be exposed and lobbied for the Speaker’s post as safe haven."

Not sure if he was referring to this FB comment below: 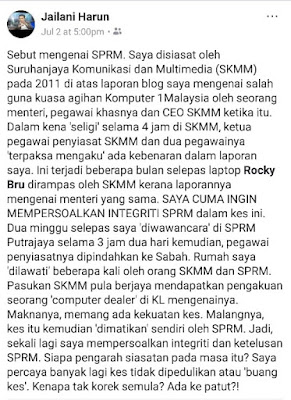 There have been others but it remain all talk. However, the subsequent comment that is worth pondering is "Rais’s old score during S46 belum selesai." What old score and against whom?

It is not confirmed Rais is assured the position. But he is no more shy about it. And, he was never shy to say he has burned his bridge with UMNO to start Semangat 46 and then rejoined Mahathir's UMNO to accept Ministerial position.

Apparently, the choice is between Rais and pro-"opposition" and pro-liberal former Court of Appeal judge, Dato Hishamuddin Yunos. And, The Mole here reported Ambiga giving her support in the extract below:


“A speaker must be familiar with the Constitution, laws and must command the respect of the house. Must be independent. We have retired Court of Appeal judges who fit the bill,” read Ambiga’s tweet.

Ambiga however did not name the former judges being proposed.

She was responding to a tweet thread of civil rights lawyer Eric Paulsen on how crucial it is for the speaker to be chosen from a wider pool rather than confined to members of parliament.

This would be one among too few views of Ambiga that is digestable and could to be agreed on.

Ambiga's public statement and speeches seldom potrayed wrongly as naive. Her choice on Speaker is better. Rais's former Semangat 46 comrades tend to describe him as "untrustworthy, vindictive and wicked." Quite the stereotyped tendency of Negeri Sembilan Malays to be a pendongki.

The political Ambigau in her did surfaced as she acknowledged, "Manifesto say it should be MP. But if excellent candidate chosen, the people will accept."

Come to think of it, why should they bother of PH not delivering their manifesto?

Majority of voters have come to accept that PH lied in their Manifesto and Mahathir acknowledged they simply promise since they did not expect to win the election. By that they should acknowledge that the RM1 trillion debt is a lie to cover-up their inability to not only deliver but also show any plan to deliver any of the 100 days promise. 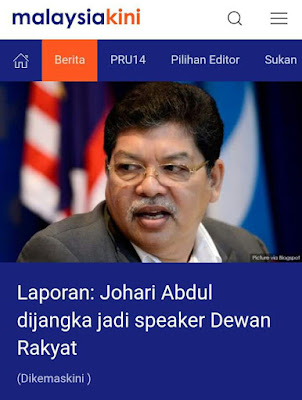 Now government media, Malaysiakini broke it that it will likely go to Dato Johari Abdul, whose already appointed and swore in as Minister. He was earlier slotted for Kedah MB and then Speaker of Kedah State Assembly.

Rais recent statement against Lim Guan Eng, Tommy Thomas and UEC may have destroyed his chances for the post. By the way, Rais has begin whacking PH to be frank on cost of living. He hit at BN during GE14 campaign trail. Bridge building again?

Realpolitik may be at work. Mahathir's cabinet appointments ruffled a lot of feathers in PKR and DAP. Noticeably, almost all but one PAN MPs and 8 out of 11, including the newbies and unknown MPs were given position in cabinet. None for Nik Nazmi, Nga Kor Meng and Chong Chen Jen.

The choice for Johari maybe an attempt to another confrontation between Mahathir and Dato Seri Anwar Ibrahim, which was rumoured to be in communication with Zahid.

PH leaders are not happy with Mahathir's manouvre to strengthen PPBM within PH by inviting or heard to be buying UMNO MPs to jump ship. Mahathir cannot have the cake and eat it too. A 12-MP party cannot have it all.

Malays that decided to dump UMNO cannot expect to be melancholic and long for the days of Malay friendly policies under UMNO dominant government. The government the voted has minority Malay MPs. If they happy with that arrangement, accept PH choice. And if not, padan muka!

Mahathir said he is prepared to leave if there is a fallout between Pakatan leaders. In Mahathir-speak of cryptic political language, the fallout is not between the leaders but usually it is him and others. For the moment, Mahathir diehards believe he is in control so he is not likely to leave yet.

Ah well, #AsalBukanRais. A judge would have been better.

It could be Lim Kit Siang