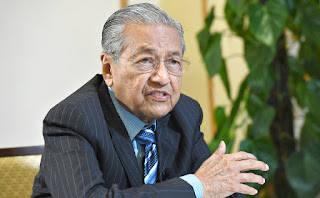 The public is excited over the cheap branded-species durians found in abundance by the roadside these days. However, they do not realise it is indicative economic powerhouse China has retaliated economically.

Palm oil prices and latex has fallen below cost and plantation companies are looking at loses. Millions of farmers are facing the prospect of poverty level income. The silent retaliation has impacted on tourism, stock market, bond market, and ringgit.

It is no secret during and after the election that Tun Dr Mahathir is severing the economic ties with China built by Dato Najib on the long friendship established by his father. The storyline Mahathir wish to create for his fellow PH politicians is he is moving back to his old friend, Japan.

Three days ago, July 16th, NIkkei continued its pessimistic tone in an article, "After the upset: What Mahathir's return means for Malaysia" with the poser on the 93 year old ability to deliver the high hope of youth. Is the mouse fixing the pumpkin?

NIkkei is the world's largest circulation financial newspaper. Its political leaning is described as moderate conservative but its humble beginning as an in-house publication for one of Japan's largest sogososha, Mitsui & Co. maybe reflective of Japan's view of Malaysia.

In the July 10th article, an excerpt reads:


Mahathir has been relentless in holding the previous government accountable for corruption. Najib has been indicted on charges of embezzlement from state fund 1Malaysia Development Berhad.

But the government has offered little of substance in terms of new economic policy. Mahathir has revived policies from his previous stint as prime minister from 1981 to 2003, including looking to establish a new national automaker and learning Japanese quality control practices as part of a renewed "Look East" policy.

But with the global auto industry changing at a dizzying pace, any new venture would face unclear prospects of success. Proton Holdings, the fruit of Mahathir's previous effort to create a national carmaker, is hardly a runaway success, posting sluggish sales in recent years. The company is now 49.9%-owned by China's Zhejiang Geely Holding Group.

Kuala Lumpur will need to get Malaysia on track toward fiscal health to stem the ringgit's decline. This will require a clear growth strategy alongside the belt-tightening measures already underway.

Despite ending with a note of hope and tolerance of his past from a Malaysian Chinese busnessman, the July 16th article remain pessimistic in the excerpt below:

Mahathir had more of an agenda than merely taking on a tainted successor, however. As he took office, he reaffirmed his commitment to a series of populist economic measures he had outlined during the campaign: overturning an unpopular 6% goods and services tax, restoring fuel subsidies and reviewing big infrastructure contracts, particularly those with Chinese concerns.

Credit rating agencies expressed concern about the proposals. Moody's Investors Service warned on May 14 that such policies would be "credit negative" for the country, adding that there was "little clarity" about the new leader's economic agenda. Fitch Ratings noted that the GST contributed 18% to government coffers in 2017, and replacing it with a narrower sales and services tax could result in a correspondingly higher deficit.

"With respect to the election promise to abolish GST and replace it with a sales and services tax, there is concern that government revenue would fall and that the fiscal deficit would widen from the present 2.8%, whereas the previous government's promise was to bring it down further," he said. "There are also a number of other commitments, such as bringing back fuel subsidies, that would adversely affect the revenue base as well."

The stock market delivered a mixed message when it opened after a two-day post-election holiday, with shares falling at the open but recovering to close slightly higher.

Mahathir's plans to return to the old model known as Malaysia Inc. -- a nationalistic legacy that Najib smashed during his nine years in office -- have only added to questions about his economic plans. 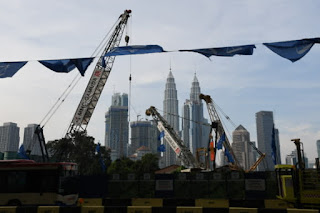 "Actually, the idea of a business-friendly government was mooted long ago when we introduced the Malaysia Inc.," Mahathir said on May 10. "The corporation is intended to build the Malaysian economy with the help of investors from inside and outside the country."

Inspired by a similar model in Japan, the 1980s-era idea favored the privatization of key state agencies with the government holding substantial stakes. Mahathir appointed allies to control and spearhead privatized companies, fueling criticism that he practiced favoritism. This lack of corporate governance contributed to the collapse of some of these companies, including Malaysia Airlines and national carmaker Proton.

Najib dismantled the model, restructuring the shareholdings in these companies by putting sovereign funds in control.

With a fresh mandate, Mahathir seems determined to drive the economy forward. During his first term, Mahathir promoted a plan known as Vision 2020 -- a pledge that Malaysia would join the club of developed countries by 2020. But that vision has become blurry in recent years. Malaysia's gross national income per capita of $9,660 in 2017 was well below the World Bank's threshold of $12,236 to qualify for high-income status. 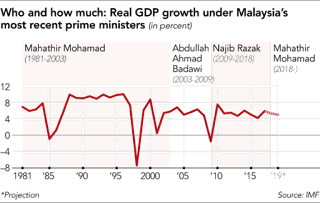 "Mahathir will need to leave Malaysia in good hands so that the country can finally escape the middle-income trap after three disappointing decades since the Asian financial crisis," noted Alicia Garcia-Herrero of Natixis, an investment bank.

Munir said the government will focus on evaluating state budget and debts, including all major ongoing infrastructure projects. This may prove an obstacle to China's Belt and Road-related investments in the country, notably the 55 billion ringgit ($13.9 billion) East Coast Rail Link. While Najib had promoted ties with China, some Malaysians -- including Mahathir -- have expressed concerns over the debt commitment on the 688km link being built and financed by Chinese companies.

In a move that has raised further worries among regional observers, Mahathir hinted at a more protectionist agenda, saying that while the country welcomes trade and investment with foreign countries, Malaysia will not bow to any external pressure.

"Sanctions by big powers will not influence our policies," he said, apparently referring to U.S. President Donald Trump's punitive tariffs and his recent reversal of the Iran nuclear deal, which lifted sanctions on the Gulf state. "We know the powers of such countries apply sanctions on countries who do not agree with them."

Mahathir could claim not wanting to be dictated by powerful nation. But the emerging reality is Malaysia is looking at the prospect in a term used by Israel's PM, Benjamin Netanyahu's towards country's not supporting term as "international isolation" and it's immediate impact is on the economic front. .

The Middle East is upset with the loud, and aggressive yet-to-be-substantiated accusations implicating them made on the 1MDB debacle. Heard one nation is considering to pullout its US$15 billion investment. RAPID only received first tranche of Aramco's financing.

China now accused by Sarawak Report has given their retaliatory hint that is potentially devastating to the economy. Mahathir expressed his reluctance to meet US President, Donald Trump.

EU may not be keen on his past human rights record and more so, with the current abuse of power to ignore rule of law and another sacking of judiciary.

Mahathir is back to his old self to pick fight with Singapore which in turn puts relation with Asean neighbours on cautious mode.

His only hope for support is Japan but Nikkei is hinting of fading prospect with Malaysia's post-GE14 economic mess attributed to the verbal diatribe of his and the new Minister of Finance. Japan of today has almost nil interest rate but it is not globally engaging as before.

Perhaps on another planet or world, there will be room for a leader of a small nation such as Mahathir to get everything their way.

You know it, I know it....but stupid pakatan shit supporters are too stupid. Not that different from Trump's supporters.

Durian vendors attributed the oversupply to the hot weather in Malaysia, which makes durians ripen faster.

Mahathir may have 22.5 years experience as Prime Minister but the world had changed since and he maybe struggling to come to terms.

Thats why he is reliving his past 22.5 years starting with “Back to the future” policies revivals.

Next in pipeline is Internal Security Act 2.0

Mahathir is stale in ideas and have no vision for Malaysia Baru, he only have rear view vision of Malaysia lama.

Mahathir admit japan may not give low interest rate

Risk factor does not commensurate