Dear KJ from a Gen Y 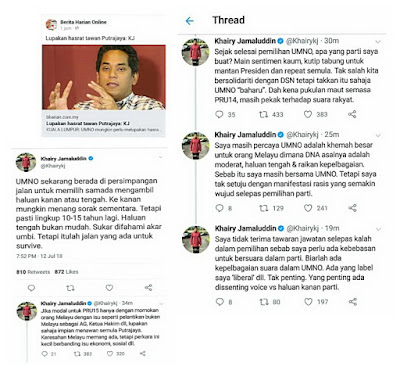 There was a subsequent reaction from YB Khairy Jamaluddin on the appointment of former Attorney General, Tan Sri Apandi Ali on UMNO Supreme Council.

Apandi has since rescinded on the offer citing the controversy his appointment could attract. If retired Court of Appeal judge, Dato Mohamed Ariff bin Yusof could accept appointment as Speaker for Dewan Rakyat, why not Apandi.

Perhaps, being associated with 1MDB and 1MDB related debacle is a major hinderance to any involvement with UMNO.

Back to KJ, his earlier comment on the direction of UMNO did ruffled some feathers.

One would have thought he appealed to the Gen Y but one reporter of that generation, Zaidi Azmi wrote a Dear KJ on his Facebook:

Please understand that the parliamentary and state seats won by Umno were secured through the votes of kaum Ibu, kaum bapak and orang tua-tua.

And the bulk of them who voted for Umno are conservative Malays who sincerely believed that the party did nothing wrong in existing for the sake of safeguarding the interests of the Malays.

Even more so when the majority of the Malays' earnings are woefully behind those of other races.

The generation of which you are trying hard to curry favor from doesn't give two hoots about Umno -at least for now-.

Your lost at the party polls, which you attributed to prevalent warlord culture, may also have got something to do with the fact your "forward-thinking" views just do not click with the majority of Umno members.

You mooted the need for Umno to open its membership to non-Malays seem to indicate your obliviousness over the fact that Umno's survival since before Merdeka was primarily due to the Malays.

The fact it was always Umno that had carried BN to the finishing line of every GE also suggest that it is Malays who believed in Umno's struggle that had aided BN.

I'm not saying that Umno should ignore the millennials, because god forbid, the party needs their votes to remain relevant.

But must you bend over backwards and make Umno's core supporters feel bad just to make the millenials feel good?

The popular contention is that Malaysians have turned over a new leaf and that the majority no longer cared about racial politics.

But let's be real. Racial politics will never go away in this country. Just take a look at which party has been so gung-ho about the whole UEC drama.

The only reason why BN lost was simply due to the fact that they were unhappy with Najib. This shouldn't come as a surprise as blind loyalty -though it might not seem like it- is a knack in which Malays have failed to perfect.

A case in point? Remember how bloody was the ouster of Sultan Mahmud?

The cracks in Pakatan are showing and some of the more erudite and conservative Malays who voted for Pribumi are already starting to see which party in that motley coalition is wearing the pants and it's not the one with 13 parliamentary seats.

My advise to you KJ, not that you needed it: "Grow up!"

The usual manner UMNO supporters response aarguement and criticques would be to resort to character attacks, especially on KJ's failure to attract young voters to the party.

KJ was also criticised for his after event stand on 1MDB.

Knowing too well, any critical comment in concert with Tan Sri Muhyiddin Yassin and Tun Dr Mahathir would have ended his political career with UMNO so KJ was kept silent.

KJ's series of critical outbursr received support from Dato Zambery Kadir and Tan Sri Rahim Tamby Cheek on Twitter and FB. However, their support could be interpreted politically. 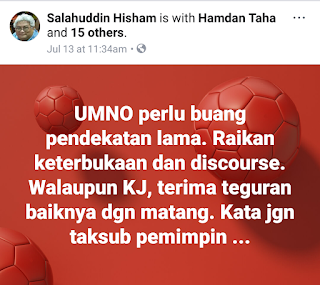 Despite having a crtitical leaning against KJ, this blog would give him the benefit of the doubt.

UMNO has a far more healthy and substantiated discussion than their breakaway group, which are personality cult followers. They seldom resort to bad language and cursing to deviate from their limited ability to articulate.

KJ is also rejected because he is currently accused of doing Mahathir's bidding or breaking up UMNO from within. His past will also catch up in him.

In agreement with the above Facebooker's view, there should be encouraged a discourse and healthy discussion amongst UMNO members.

The same Facebooker had once proposed KJ as opposition leader. Apparently, KJ was offered various roles and positions in UMNO but he declined.

UMNO direction should be by ear and by test case. Since the liberal leaning talent in UMNO rejected the opportunity, it had to be led by the right winger of the Malay party.

Maybe, only an angel free from all sin is allowed to tell UMNO to change. Even that, it is not easy to impose on a group defensive and deeply imbedded of their feudel ways.

To change umno..to what substance!!? Please tell us what kind of change does umno needs? ..and dont tell us the same script by kj.. arrogant boy!