Tun Dr Mahathir denied he was vengeful but to those discerning eyes, not still in pampers and baby pacifier between 1981 to 2003, it is not believable. Not with the overtly aggressive actions of police, and MACC.

And, not with his recent statements and speech yesterday advising civil servants and politicians to be honest, avoid corruption and not enrich themselves, family and friends.

On the back of vengeful and witch hunting on civil servants, politicians and GLC CEOs throughout the country being removed drastically through dismissal, or immediate transfer or force resignation, there was a similar but small happening in Shah Alam yesterday.

A senior officer of MACC was handcuffed and chained by police to Shah Alam court to be charged for a relatively misdemeanor offense under the penal code.

Former Director of AMLA at MACC, Fikri Ab Rahim was charged yesterday at the Shah Alam court for giving a false information following a raid by JAIS at an apartment in Seri Kembangan Serdang on December 17, 2017.

He and his alleged partner, also an MACC staff was already charged for khalwat in early March 2018.

The case mentioning was delayed on request by defendent for a private hearing. [read Sinar Harian HERE and New Malaysia Post HERE].

And yesterday, Fikri was charged for two counts of offenses relating to providing false information to the JAIS officer in the form provided [read Kosmo HERE].

According to the various news reports [read also BH and Utusan, HERE and HERE respectively], Fikri was charged under Penal Code 177: 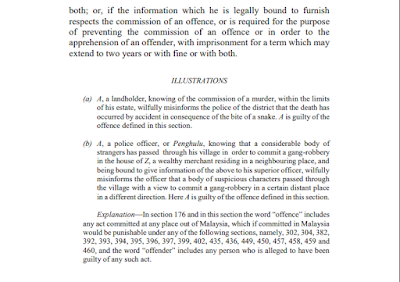 If proven guilty, Fikri face fines of not more than RM2,000 or imprisonment not more than 6 months or both. He is allowed bail for RM3,000 for both offenses and next court date will be on August 3rd.

The law, through the syariah court and civil coourt, should take its due course but the concern is with regard to the treatment by police to apprehend and subsequently handcuff and chain Fikri when being brought to court.

For an offense that involve a fine of no more than RM2,000, it is unnecessary when considering Lim Guan Eng was allowed to be summoned to court for offense related to corruption in the millions and was not apprehended before being brought to court.

In another recent charge, though he was apprehended by MACC, Dato Najib was not handcuffed and chained to court.

The police or the court may wish to send a warning to other law enforcement officers, especially high officials to expect them to respect and abide the law more than other citizens.

However, a person is innocent until proven guilty and such message could be delivered through the judgement.

The cases may have its legal merits but the application to the syariah court to have the case heard in private certainly hinted of a case of more than meet the eyes.

It is not WYSIWYG or what you see is NOT what you get.

The reason he gave away false information will only be know in court but there is always the possibility that Fikri or his alleged partner could be in the midst of a law enforcement operation.

Nevertheless, this is a "summon" case. It is not a seizeable offense and not of the hard crime nature. The action by police certainly raise grounds for concern.

Fikri has every right to file complain and sue the police for wrongful arrest.

One could recall that there is probably bitterness on the part of police following raids by MACC that saw police retaliated on an MACC officer in Penang.

There was bitterness on MACC following the arrest of police officer for excessive claims.

There is also the infamous raid on Melaka police related to online gambing syndicate which may have involved high police officials and even officer close to former CM office. The latter was likely be the motivation to fix former MACC Chief Commissioner that led to his early retirement.

However, these are distant incidents and more likely recent events may have more bearing on the alleged indiscretion by police.

The manner Dato Shukri Abdull is acting does raise concern to the discerning public, whether he is out to pursue corruption and abuse of power or being emotional and vengeful. 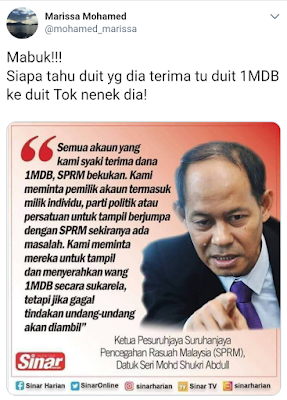 His action to freeze accounts based purely on suspicion and without establishing proof is suspicious of mala fide intent to assist the abolishment of UMNO. 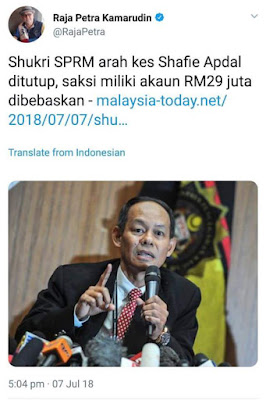 Is is true Shafie Apdal case is closed?

This was part of the mass corruption at KKLW in Sabah revealed by his deputy, Dato Azam Baki tantamount to a total of RM1.5 billion siphoned out through projects.

These was the brave effort of the previous MACC Chief and his team. This decision will put into question the independence of MACC from partisanship.