Under test, Mahathir fight on corruption and Tommy Thomas integrity 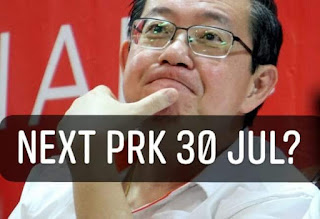 Tun Dr Mahathir claimed he inherited a government riddled with corruption on CNN would appease the "üneducated" majority of voters in a state of euphoria.

That is unless the long list of broken promises and excuses that could be stretched into a booklet had not douse the enthusiasm. .

The politics behind such claim is glaring. Rocky Bru's latest posting humoured the interview with a picture of Pak Lah replying, "So did I."

Any regular readers should have notice that this blog do not take seriously any statements with insidious political undertone.

The same with the Mahathir's chest thumping claim his new government will be better and cleaner to another foreign media in early July.

It was to prep up for his announcement on a series of measure to ensure a clean and corrupt free new government.

The measures put together by the Cabinet Special Committee on Anti-Corruption include Tan Sri Abu Kassim's long-time interest to regulate political funding.

It is fairly credible and worthy of support though Mahathir's insidious political intention is quite visible. 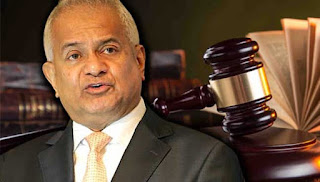 Today, Attorney General Tommy Thomas, who was then Guan Eng's leading defense lawyer for the case, is under test to decide whether to continue or withdraw from the case.

The ball lies at the feet of Tommy Thomas but rumour from within the legal profession claimed he has made a stand to recuse himself from making any decision.

However, the AGC integrity remained in question following the withdrawal of cases against former opposition characters (now obviously government side).

A message viraling in the social media listed the names:


After GE14, all cases against PH leaders - whether in courts or already decided by the courts - have been dropped.

Anyone could safely assume that political influence were applied to get these cases withdrwan .   .

The major test on the political will of the new government led by Mahathir to combat corruption still remain on his appointment of Lim Guan Eng as Finance Minister.

Historian Professor Dato Ramlah Adam claimed it is the first time in history that someone being charged in court is appointed Finance Minister. UMNO Ministers were expected to resign upon being charged but Guan Eng refused to resign his post as Penang Chief Minister when he was charged.

It led many political observers to believe Mahathir was forced to announced his appointment.

Many more appointments and bizare policy announcements now led segment of the public to believe Mahathir has lost control.

Mahathir's usual excuse is to blame others whenever he is accused or implicated in any wrong doings or bad decisions. This time Tommy Thomas is believed to have passed the responsibility to the DPP in charge of MACC to decide.

Credible as it is one could expect a lower rank officer to be under huge pressure to make a decision. An unfavourable decision would send the officer to a judicial position in a court at Kapit Sarawak.

The pressure could be more unbearable with MACC's clear statement they are not dropping charges on Lim Guan Eng. The Star reported: 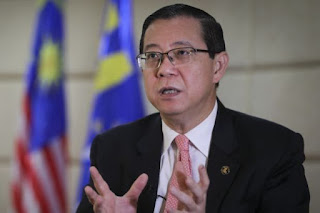 Denying such a move, the Malaysian Anti-Corruption Commission (MACC) says it has no power to withdraw cases that have been taken to court.

“The authority to do so rests with the Attorney General’s Chambers,” said the MACC in a statement.

The agency was responding to a report by China Press which quoted sources saying that MACC is likely to withdraw charges against Lim when his corruption trial resumes next week.

He was charged with using his position as chief minister to gain gratification for himself and wife Betty Chew Gek Cheng by approving the application for conversion of agricultural land to a public housing zone in Balik Pulau to Magnificent Emblem Sdn Bhd.

He faces a second charge of using his position to obtain a plot of land and bungalow at No. 25, Jalan Pinhorn, on July 28, 2015, from businesswoman Phang Li Koon for RM2.8mil, at below market value.

Lim was sworn in as Finance Minister on May 21, following Pakatan Harapan’s victory in the May 9 polls.

His trial resumes on Monday.

The Lims and DAP seemed to be able to get their way in the new government. They or their suggested appointees seemed to get appointed in the key and strategic positions.

The fact that Guan Eng could insist he be appointed Finance Minister may have led many to believe that he will be scot free.

Before GE 14, he was so combative of MACC that he could accuse them as double standard and questioning their investigation of the Penang tunnel case.

It led Sabahkini2 to speculate that behind the scene, MACC's Shukri will succumb to pressure and withdraw the case. 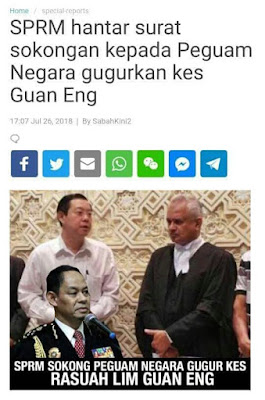 It is not a credible theory but there are too many sceptics who believe there will be intervention from above. 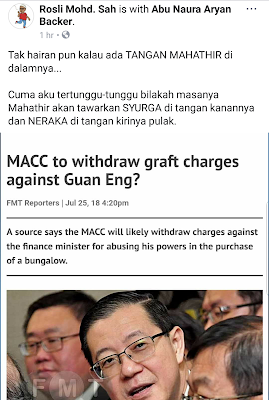 It is not limited to facebookers but also those within the legal profession.

The public pressure to see the case continue is unbearable. NST column yesterday quoted views to call on the case to continue.


“I hope the rumour is not true (withdrawal of the cases), as it would lend credence to the public’s perception that the A-G’s appointment was part of a political deal, where in return for DAP’s support of Dr Mahathir as prime minister, Thomas would use his power to have cases against Lim withdrawn.

“This, especially since the A-GC’s had made a determination (earlier) that there was sufficient evidence obtained by MACC to proceed. Unless new, irrefutable evidence has emerged, it is in the interest of justice and good governance to let the court decide.”

Balls on the court of Mahathir and Tommy. Whether they are truly serious to combat corruption, the public is watching the decision today. 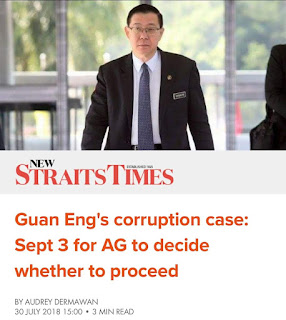 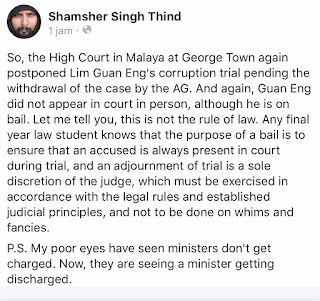 There is sufficient time to decide. What game are they playing?

I hope thomas and pakatoon drop his charges.. 😬

So, what would you and the rakyat expect? Since when "integrity" is an equitable norm for the politician. Mahathir and his goons? hi! hi! don't make me vomit.