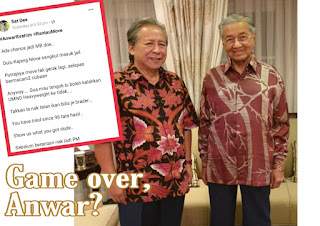 Consequent to the PPBM lost at Semenyih, Dato Seri Anwar Ibrahim commence his offense for the Prime Ministership with the thought that Tun Dr Mahathir's claim of two third majority a fake.

He had Tun Daim-controlled NST reported a PKR assemblyman call for Anwar to replace Mahathir immediately.

A PPBM supporter text an image of his view of Anwar's ambition and the demise of PH with a new coalition led by Mahathir and Azmin by his side.

It will not be shared to protect his identity but the view of SatD, a PPBM supporter to say the least, claim the end of Anwar is near.

Today's meeting between Dato Anifah Aman and Mahathir could provide a glimpse of the end game.

Anifah's statement after the meeting below:

Independent MP Anifah's position should be viewed seriously by Anwar as he is capable of talking to the Sarawakians, particularly the Dayak political parties.

If Mahathir has a plan to resolve MA63, it will be the end of Anwar's lifelong dream and decades of wait to be PM.

The Sabah and possibly Sarawak MPs from the opposition and independent will give their support to Mahathir against any possible motion of no confidence in. Parliament.

However, Anifah's openness to PPBM's democratic right to enter Sabah is interesting for interpretation.

It could be to check on Dato Shafie Apdal and Warisan from going on rampage to abuse their positions without any sense of guilt to break the law and compromise national security.

Shafie has pending corruption cases related Sabah water and his days at KKLW.

A simplistic view could be to accuse Anifah for trying to salvage his seat in Kimanis K.
and save his brother, Tan Sri Musa Aman, who already claimed trial.

However, Musa could be facing additional charges to make it the total number of charges at 52.

It is low class politics and not synonymous with Anifah to do so. The diplomat in.him would not resort to unjustified actions. If he lose the petition, he could use the opportunity to retire and push a successor.

The move may not be a winner take all for Mahathir. Local Sabah government or opposition parties are not joining PH. Neither do Sarawak political parties, who are federal level opposition.

It could be meant as a check and balance on Mahathir to deliver and at the same, pressure on PH to put together a sound government that is devoid of incompetents and senseless talking Ministers.

The common motivation for oppositions willingness to support Mahathir for now is the years of distrust with Anwar Ibrahim, and disgust with the greed of arrogant Lim Guan Eng and ruthless DAP.

Mahathir may want to see these Ministers go.

So do the incompetent Tommy Thomas as AG. There seem to be rampant racial and party biasness in the actions and inactions of AGC.

The pertinent question that remain hanging:

Is the PH government financially capable of fulfilling the expectation of MA63?

LGE made a major mistake with GST that caused government to have a deficit in which the latest heard figure is believed to be in the tune of RM50 billion.

It is causing difficulty and hardship on peoples' life with his reckless budget slash.

Institutional owned assets are being sold like an annual sales campaign of the country.

Today, there is a leak, which was earlier hinted by Tengku Mahkote Johor, that Khazanah is selling Legoland in Nusajaya, Johor.

Khazanah already reported it's first ever loss of RM6. 3 billion and still trying to hoodwink the investment community with false hope of turnaround for 2019.

Business confidence is not expected to improve in the immediate horizon.

Government is in no position to address the situation. Market is fully aware and staying away from government asset on quick sale.

So where... where ... where is the money for Mahathir to fulfill the MA63 so demanded by Sabah and Sarawak?