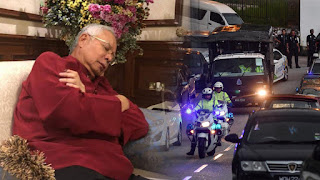 Today is February 20th and the 11th of Rejab. Rejab is a holy Islamic month preceding the months of Syaaban and Ramadhan. It is one and half month to go till the first day of Ramadhan.

Last year's first Ramadhan was memorable to this blogger personally. In addition to the loss of the ruling party, BN, Dato Najib's residence was raided by police in a high-handed manner on the first Ramadhan night upon his return from Terawih prayer at Kg Baru.

So happen, we paid respect to Najib that afternoon.

It was questionable to use market value as some goods are gifts and there is the credibility of the valuation done.

Subsequent to the raid on the residence on May 17th, 2018, three condominiums at the Pavilion in Bukit Bintang and a "safe house" claimed to belong to Najib were raided.

The police was reported to be looking for documents related to 1MDB, but instead found cash, foreign currencies, handbags, jewelleries, watches, and various other luxury goods.

Perhaps after not getting what they wanted, the police raided the home of Najib's mother, Toh Puan Rahah in September. They found nothing.

There was an issue raised in the manner the raid at the Pavilions and other location was done by Amar Singh. The owner is not present to verify the seized goods as it was a clear cut violation of the Criminal Procedure Code (CPC).

It is coming to a year and no charges made against Najib or wife, Datin Seri Rosmah related to the goods.

Since the raid was done under the AMLA (or the longer acronym AMLATFA), the time is up and government has to decide to return the goods or seized it as government property permanently.

However, there is another problem as some of the goods are believed to have vapourised in thin air. 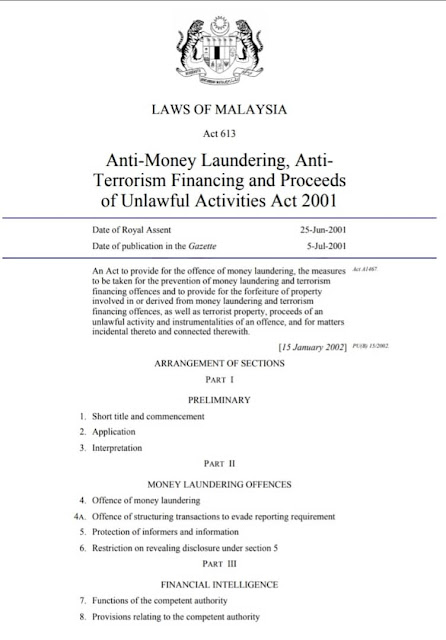 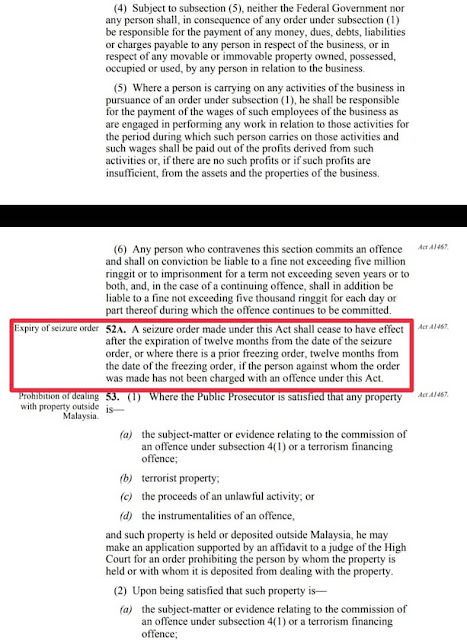 According to Section 52A of AMLA, the seized good has to be returned to Najib and Rosmah after a year unless DPP press charges or seek court order for government to forfeit the goods.

A retired DPP said the authorities for the seized goods lies with the Investigating Officer for the first three months. Subsequently, it comes under the authorities of the DPP for 6 months. After the 9th month, if there is no action made, it should be released to the owner.

Unless a court order is obtained, which there were no news reported, the enforcement authority cannot maintain possession of the goods. Perhaps, DPP could convince the judge the need for extra time for investigation. The ninth month should end on on February 16th 2019.

By May 16th, 209, the seized money and luxury goods must be returned to Najib and Rosmah!

When it happened, Najib was reported by Reuters as per the following extract


Najib said the public seizure of handbags and other luxury items created a negative perception but most were gifts given to his wife and daughter and had nothing to do with 1MDB.

“Yes these were gifts, particularly with my daughter’s they were tagged, they were actually labeled: when, by whom,” adding that a lot of them were wedding presents.

Najib said his son-in-law Daniyar Nazarbayev, the nephew of Kazakstan President Nursultan Nazarbayev, also gifted many of the handbags to Rosmah.

While we were at first shaken and found it inconceivable, a former Ambassador explained that it is possible for the PM and his wife to amass gifts from foreign leaders and dignitories.

It is possible as only part Mahathir's gifts, obviously without the jewelleries, luxury goods and valuable items, could be made into a museum in Langkawi.

Be that as it may as it is a question of evidence and proof. However, there was a dispute on the amount of cash seized by police.

Amar Singh informed to the media that RM114 million cash was seized but Najib's claim is that there was RM160 million. Apparently, Najib has documents and proofs to substantiate the shortfall by RM46 million.

Did Amar Singh told the truth? Did anyone disappeared away with the money? Who? 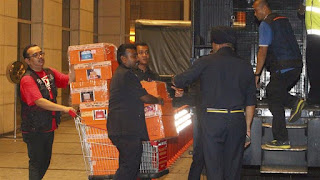 Another issue that have been getting the public attention is the 44 jewels belonging to a Lebanese jewellers she had either rented or viewed the jewelleries in view of purchase but was seized before it was returned.

The jeweller had sued Rosmah on June 26th, 2018 immediately upon the raid by police. The jeweller claimed to have sent the jewelleries worth about RM44 million.

On February 25th, media reported that the court was to request an answer as to why the police did not comply with the court order to allow Rosmah to inpect and indentify the jewelleries in question.

Earlier February 14th, court had ordered Rosmah to prove the whereabout of the jewelleries. However, police was not cooperative and it is understood that they only showed pictures of the jewelleries but did not allow her to physically inspect them.

Rosmah had applied to strike out the suit but police need to confirm the jewels are among the 12,000 pieces of jewellery items seized by police.

Strangely, High Court dismiss the application of stay after the explanation that it takes time to access the jewels kept at BNM. The argument was it is a civil case and not a criminal case. It will be difficult for Rosmah to make her defense against the jewellers.

Senior federal counsel Narkunavathy Suderason was reported to have "agreed with the defendant that after a lapse of one year she will know for sure whether police have the 44 pieces of jewellery worth US$14.79mil (RM60mil) or not".

The trial dates was set for March 4th and 5th to 21st May. The latest heard the police has still not complied with the second court order. Has the 44 jewelleries gone missing just like the cash?

It is heard Tun Dr Mahathir and Tun Siti Hasmah visited Toh Puan Rahah to apologise. However, we have yet to confirm as it could have other political implications.

After a year, and it will be in the holiest month of Ramadhan, Mahathir could use the occasion to visit Najib and Rosmah to apologise. The case made in a rush and meant as political propaganda intended to shame Najib is beginning to be questionable.

But bet my month salary plus any dedak, it won't happen. Never ever will Mahathir admit to his mistakes and apologise.