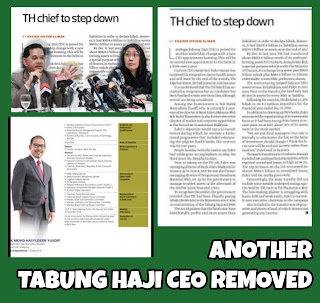 Since the Pak Man Telo expose by Facebooker Salahuddin Hisham on March 2nd, 2021, Lembaga Tabung Haji have been absolutely silenced without a response.

Its a clear cut case of non-distributable income being given out, which current LTH CEO Dato Nik Hasyudeen used to accuse previous management of doing a Ponzi scheme-like operations.

In this age of social media openness, which used to be led by blogs, keeping silence is not an option for Investor Relation or Corporate Communication people, more so management.

Issues will not go away and gets buried. These days getting someone on WA group to deny, "It's not true" is not good enough.

More so with extract of documents provided. Made possible by technology to enable easy distribution of image, text, audio, and video. Proudly to say, if it is written in this political economic blog, it does get at least attention from its modest number, but yet influential followers.

Perhaps, this blog can claim to be an Industrial Relation blog too. Nik Hasyudeen will not be preachy anymore in his way to evade hard questions. He was given the Donald Trump reality show ending.

The end of evil? 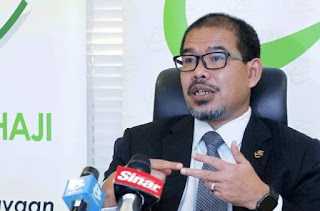 An embarassing ending to an illustrous careeras a professional accountant for this ksampong boy from Kelantan.

Allah pays cash and a swift retribution on earth is a useful reminder to never be in-cahoot with evil.

It was only yesterday in August 2019 that this blog posted Nik Hasyudeen replacing Zukri and also hinted the nonsence Zaiton was beginning to do at Bank Pembangunan.

All three are gone with Dato Nazir Tun Abdul Razak to replace Zaiton at Bank Pembangunan. Sadly, it will comes with Nazir's trademark quench for non-beneficial merger.

He will be merging all DFI at the detriment of SMEs. The merger basis will be a selfish perspective seen from a capitalist point of view.

The merger of Banks done by Tun Daim at the turn of the milleneum does not benefit consumers but create monopolies and allow bankers control on economy tighter to the point of choking.

Nevertheless, Zaiton is gone, her stooges gone, and many years of expose of Tan Sri Dr Zeti now out in the open. There is still Dato Norshamsiah heading BNM.

Nazir, who was part of the plot to destroy LTH, somehow is getting a second life. Literally too as he survived a cancer scare. 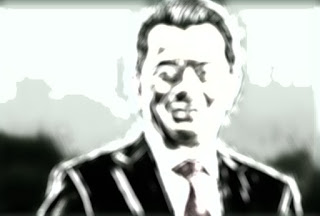 Nikko will be replaced by AA, a corporate man with humble beginning from Klang and proudly not even a boarding school product.

He has a long and wide range of corporate experiences, whose career outside banking started under Tan Sri Halim Saad.

All the luck needed to compliment his effort. He ... opps yes it is male, will need to understand the deceitful manner Zaiton avenge for her due removal from Bank Islam by slandering LTH.

A lot of her interpretations of LTH account was done by wrongly applying accounting standards with support from PWC, which were not in sync with the Act.

They were playing to the political gallery of Rafizi Ramli from documents probably leaked by corrupted Zeti herself. Their accusation then was not justified, but politically motivated with malicious intent towards the institution. Zeti was giving assistance to Tun Dr Mahathir to embarass the then BN government.

At the same time, Zeti could be covering up her, husband and children corrupt ways by doing her numbers on others and drumming up her public popularity.

AA should acknowledge Nik Hasyudeen's Ponzi Hibah is clearly giving put "dividend" out of income from UJSB that would only be received years in the future.

The restructuring done by Dato Zukri and Dato Zaiton Hassan screwed up and severely weakened LTH. The sukuk bond issued by UJSB in the exercise was not of good credit standing to convince auditor the future payment from UJSB is reliable.

One can shrug to the grim prospectof UJSB defaulting on the Sukuk on expiry date, LTH buried into corporate history book, and Lim Guan Eng rejoiceing to the detriment of Malaysian Muslims.

AA will need to get trustworthy advisers and be wary of ex Bank Islam management team brought over to illegally replace LTH managers. 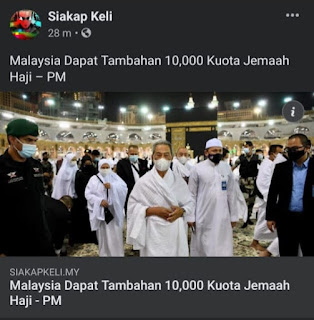 Operationally, do rely on the long serving Managers and staff. If it is not LTH, no other organisation in the world is as experienced and skilled in Haj operations.

More so, post-Covid Haj operation will be more meticulous. Coming out of PM's Saudi Arabia trip, it was announced there will be 10,000 additional allocation for Haj.

Its a surprise because it is unfathomable for Saudi to return to the 6 million pilgrims per season. With social distancing and strict health SOP, it could be reduced to 1.5 million.

Perhaps, PM need to save face with some takeaway from the trip. When Najib visit Saudi, he got Aramco to invest in Pengerang.

Other private and unofficial envoy of past PMs (note the plurality) received better reception from past Saudi Kings. PM official visit seemed more a private umrah trip at government expense.

It is justified by a virtual pay of respect to King Salman. Hmmm ...by going virtual, is King evading request for political donation? 🤣

One concern is the reception at Riyadh Airport by the Joe Joe Biden snubbed Prince Muhammad Bin Salman. It does not auger well for Malaysia's post second term Mahathir diplomatic restart.

Why does Muhyiddin seems more and more pathetic by the day? For the first time in my life (I'm 52yo), I'm embarrassed to be a Malaysian because this government is an embarrassment. Azmin Ali? Rina Harun? That guy in New Zealand whatever? Wan Fasyal whatever? etc etc. Because of the desperation to cling on to power, incompetents are given high posts and the country is crumbling right before our eyes.

To all the Malays and Bumiputeras who "experimented" and voted against UMNO because they bought into the Fitnahs and because it was the "cool" and "urban" thing to do...you are playing right into the kafir's "We use the Malays to SCREW the Malays" Modus Operandi. Jangan marah bila org kafir cakap Melayu Bodoh! Awak yg telah menunjukkan kebodohan bangsa kita.

Today there was an article that says that the Police department will lower the intake requirements for new recruits (constable rank) from 2 SPM credits (with compulsory credit in BAHASA MALAYSIA) to just one SPM credit (any subject). This is to ensure they get more applications from Non Malays who obviously suck at learning the NATIONAL LANGUAGE!
So why bother learning Bahasa Malaysia when even your PDRM is indirectly saying you don't have to learn it? Why isn't the option to FORCE them to learn the National language?

Make it mandatory! No BM, No Identity card! No BM, No passport. No BM, No government grants...etc etc. Kalau dulu2 dah buat No BM, No BrIM, they would've all picked up the National language within 3 months agaknya!

True Story. I was at Putrajaya to renew my passport a few years ago. At the next counter was a chinese family (father and a 6 or 7 year old son). The officer asked the boy "Nama siapa?" and the father had to translate it in chinese because the boy didn't understand the question.