Why would EPF be selling out of Top Glove?! 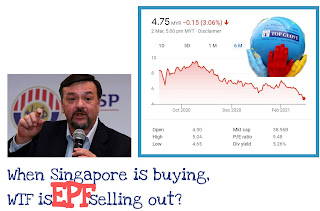 Top Glove Berhad shares closed out at RM4.75 per shares yesterday. From a one year horizon double peaks at above 9.50 in August and October 2020, the shares seemed to be on a downtrend.
This is not believable because the six glovemakers are sitting on a pile of cash, order books that takes it to 2023, and could afford giving money to government effort to combat the Covid 19 pandemic. They are diversfying like crazy and buying properties on the cheap.
Among reason cited was the worldwide vaccination and puzzle over the cash raising exercise for fear of dilution. On the contrary, a month or two ago, a market player was flabbergasted over shorting by foreign players. There was an opportunity for a short squeeze but was aborted due to developments. It adds to the curiosity.
One explanation for this behaviour is probably EPF. They have a bit more than 6% direct interest in Top Glove which is equivalent to about 492 million shares. Sometime ago, they had 8%.
EPF were actively transacting in the market. [Refer to Bursa Malaysia's company announcement here]. From the series of transactions in February, they seemed to be net buyer.
Here is the surprise bit of information. It is "reliably informed" that EPF is selling out and Singapore is buying at market dip. Apparently, a Singapore government institution is buying a strategic interest. Do they know something EPF do not know?
The only inkling will be the video below of Singapore's Education Minister speech in January, who claimed the pandemic could last 4 to 5 years:
To quote from CNA:

"Of course, no pandemic goes on forever. At some point in time, the pandemic will pass, but it may take four to five years before we finally see the end of the pandemic and the start of a post-COVID normal," said Education Minister Lawrence Wong on Monday (Jan 25) at a conference hosted by the Institute of Policy Studies.

Lawrence view is not the only such view. WHO forecasted the pandemic could last 3 to 5 years early last year.
It at a time Minister Dato Mustapha Mohamed could cluelessly uttered the number six months as the least time for economy to be back to normal.
It has not recovered since and no recovery yet in sight. The only optimism government is trying to instill is vaccine has arrived and being dispensed to the heavenly clusters and frontliners.
To achieve 80% vaccination, it could only be achieved by February 2022. However, the public has generally shrugged off the emergency and Covid policies as politically motivated despite repeated attempt to deny by Tan Sri Muhyiddin.
The latest being two political frogs jumped into the PN fold. He had to request the audience to clap the denial repeated in his speech.
Pandemic is set to stay and Singapore may see it as a strategic industry to be in.
It does not matter that the plant is in Malaysia or elsewhere. In fact, Top Glove have been woed by neighbouring countries to set up plants there with gorgeous tax incentive. Minister of Finance Tengku Zafrol seemed reluctant to follow the crowd.
Singapore is interested to have a significant interest in the world's largest glovemaker in the world. They could be looking at the endless possibilities of this once low margin high volume sub-sector in the manufacturing sector.
Singapore's UOB Kay Hian Malaysia Research is still retaining its Buy call on Top Glove with a lower target price of RM7.60 from their target before of RM10.40, which may have been made last year when the market was good. [Read The Star here].
Malaysian economy have not been good and prospect is not as sexy as ever before. It may have weighed down on the market and Top Glove shares.
Pak Man Telo?
The puzzling bit is why EPF is taking profit and acquiring more shares. One possible reason is they are realising profit to pay dividend.
Few days ago, EPF announced a surprising dividend or hibah, whichever one wish to call it at 5.2% and 4.9%. That makes no sense. Former Fund and Treasury Manager now Facebooker and political activist, Zam Yahya see only 4% is logical: 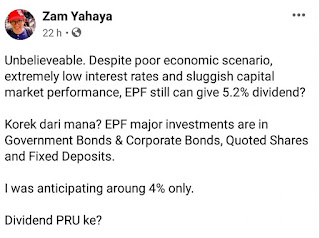 In the heat of the debate for and against the RM10,000 withdrawal of EPF, the sacked CEO Tengku Alizakri Alias revealed their holding of equity is 37%. That is almost 40% and its unheard of for a pension fund which is usually within 20-25%.
It somewhat confirmed rumors back in 2018 that Tun Daim directed EPF to defend the market but it later waved a white flag. They are now stuck!
The high hibah or dividend could be intended to discourage contributors from the one off RM10,000 withdrawal by incentivizing the return.
Is it possible that EPF is doing a Pak Man Telo or Ponzzi scheme of paying dividend from inflow of monthly contribution instead of profit?
Tabung Haji whose just announced 3.1% hibah yesterday could be a Pak Man Telo because their profit is RM2.3 billion but UJSB cannot pay cash of RM0.8 bilion thus the distributable profit is only RM1.5 billion.
The balance cash to be paid out must come from deposit. That has Pak Man Telo written all over.
Back to EPF, does the energy trained new CEO, Dato Amir Hamzah, son of the late Tan Sri Azizan of Petronas, and Tengku Zafrol dubbed as best choice to lead as the right person?
It was dramatised by Muhyiddin's propaganda machine that Amir was willing to allow easy withdrawal and Mahathir appointed Tengku Alizafri was in the way.
Nah .. Mahyuddin, Mr "It's My Prerogative" would not have allowed for it.
at 3/03/2021 09:11:00 AM