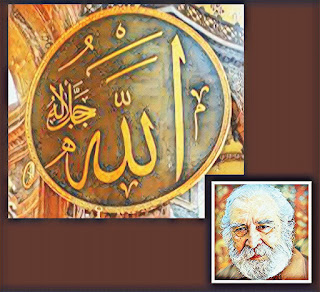 General Election must be around the corner because explosive inter-racial and inter-faith issues are in vogue and returning to the public sphere.

Latest is High Court decision by Muslim Court of Appeal judge, Dato Nor Bee binti Ariffin for Christians to use "kalimah Allah".

Justice Noor Bee's decision, that arised from a legal challenge to police seizure of educational Christian CDs of Jill Ireland at Sepang Airport in May 2008, is challenging a 4-3 Federal Court decision made in 2016 to disallow use of "kalimah Allah" in Christian publication.

The same debate is being revived on the "kalimah Allah" issue that dates back to legal attempt by Catholic Church to seek court order in 2009 against Home Ministry confiscation of Malay printed material by Catholic Church publication, The Herald.

Dato Najib attempted a solution to the interfaith impasse that put differences in religous practises and interfaith attitude between East and West Malaysia into question.

However, he could not because court process was on-going.

Since the 2016 Federal Court decision is challenged, a one for all legal decision need be made or it will be an endless pursuit.

The issue promises to be a long public debate that could drag on till GE15 and test of Prime Minister Tan Sri Muhyiddin's claim as "Malay first, Malaysian second" leader.

In Malaysia, Islam is synonymous with Malayness. 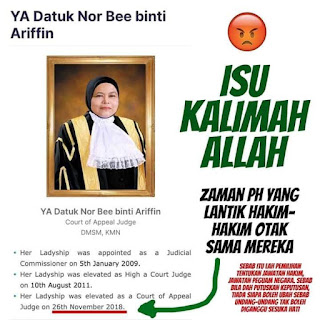 The latest decision by Justice Nor Bee is more explosive because she allowed use of other clearly exclusive Islamic words for Muslim holy sites such as Baitullah and Kaabah for Christian use.

To the general Malaysian Muslims, it is deemed as replicating Christian missionary modus operandi to proselytise Muslims in other Islamic countries.

However, certain deviant Islamic sect do not see it as a problem. The Wahabi, which profess to the deviant Tauhid Tiga in their akidah, views "kalimah Allah" or Allah as merely a meaningless word and takes a different attitude to the decision.

In the heat of the "kalimah Allah" issue, Pakatan Rakyat including Haji Hadi himself took a populist political stance to support non-Muslim use of "kalimah Allah".

In essence, the issue is not about "kalimah Allah". Refering Allah as "kalimah" is inappropriate and demeaning God.

Allah is not merely a word, but the name Muslim refer to the one and only God. It vastly differ to Christian's trinity concept of God.

The comment below by the distinguished Islamic scholar, Professor Emeritus Syed Muhammad Naguib Alattas in his Facebook more than 9 years ago in December 2012 encapculate the issue from a Muslim standpoint:

Question: The using of kalimah "Allah" by other people in this country

Well I have been talking about this long time ago. I remember about this in ISTAC, when we first established ourselves (late 80's and early 90's), I think the Arcbishop of Penang was asking this question. And I have answered that.

And then we had a meeting with the Archbishop of Kuala Lumpur and about all the representatives of Christianity, including the MINISTERS, we had a meeting at ISTAC. And I said, "Why you want to use the word 'Allah' for yourself?"

They said "we going to pray in Bahasa Malaysia"

Ok, so they said they want to change so that it more patriotic. Then in that case I'm saying that "why don't you use Tuhan while praying in Bahasa Malaysia?

Because you are talking about God isn't it?…God is not just a name…"Allah" is a name of this Being whom you called God… and in fact a Being whom even higher than what you called to be God"

And then I said, " …and "Allah" is not from Bahasa Malaysia. It is not a national language. It belongs to the language of Muslim all over the world.

Therefore your argument using this for the word "Allah" does not fit into your idea of God. Because "Allah" does not have a son, It is not one of three (Trinity), that is why out of respect to Allah we can't allow you to use this.

But when we Muslim, when we write in English we say God, or when we talk to people we say God but we mean "Allah"…but they cannot say when they speak about God it means "Allah" as they don't mean it.

We don't say "there is not God but God"..at least the ulama' among the Muslim Malays, we understand what is the meaning of that (word "Allah").

So "Allah" cannot be translated as no language has translated Allah. The Arabs themselves they only use that after Islam..although the word existed (before)..the Christians Arab they also did not use Allah (in theological, epistemological and ontological sense in the same manner as the Muslim)..if they say that it is just a language..they talking about language..because they say "Allah" like the Muslim when they (melatah)…

So it appears they want to do that in order to confuse the Muslim into thinking that all the same that is why I say one of the problems about religion is the nature of God about who Allah is that is why in Arkanul Iman (The Pillars of Faith), the first thing is "amana billah".

Unlike the earlier case involving Archbishop Murphy Pakiam, it will be tougher and more challenging with many liberal leaning Judges have positioned themselves into the Court of Appeals.

Back then, there was Dato Seri Anifah Aman who diplomatically managed to get Vatican to mediate and pull back the horses. This time around, the situation is different and government is not in a position of strength.

Whatever the court decision, faith and practices of faith are beyond the confines of the law. Spiritual faith and God transcend the limitation of law books and the logic of Godless human.

Will any court decision matter and able to put an end to the issue?