Is Agong shareholder of Green Packet? 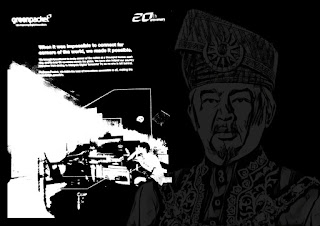 On February 8th, it was announced that DNex won the bid for Silterra. [Edge reported here] An announcement was made to Bursa Malaysia [Read here] Local media reported positively for Silterra to remain within local hands. [Read Dagang News and Berita Harian here and here, respectively].
After a long struggle, it is encouraging for DNeX, a company controlled and spearheaded by professional Bumiputera professionals and technocrats together with their China partner to hopely do another turnaround success story such as Proton and Geely.
Decison had to be made by January. Khazanah considered DNex proposal to develop local semiconductor industry through its Wafer fabrication.
Apparently, Green Packet have not given up and could be behind recent attempt to foil the already officially announced decision.
Do they have Agong as shareholder that they could still attempt to reverse the officially announced decision?
Green Packet gallantly worked hard to neutralise the Bumiputera element of DNex bid with their Bumi Fund private equity scheme and highlighting the "capable" resume of their Bumiputera partners.
It was meant for DNex because Green Packet did not have anything solid to work on. However, they were no pushover. There was talk that Khazanah Chairman was considering to give them additional six months to firm up on their financing.
In addition, it was an open secret that Dato Seri Azmin Ali preference for Foxconn of Taiwan which offered more upfront money and had liberal and Chinese media backing.
To add to the mystery, few days after the decision, EPF CEO Tengku Alzakri Alias was replaced by Dato Amir Hamzah Azizan, Edge Daily report mentioned in passing "Shahril, the current managing director of Khazanah Nasional Bhd, is also believed to be leaving the group".
Prior to the announcement, Royce Tan of The Star was still making last ditch effort for Green Packet with the article "RM336 price tag for Silterra?"
This is where it gets more interesting and mysterious.
On February 20th, at a time DNex and Khazanah is already talking over the details for the Sales and Purchase Agreement (SPA), this article below came up by again, Royce Tan in The Star: 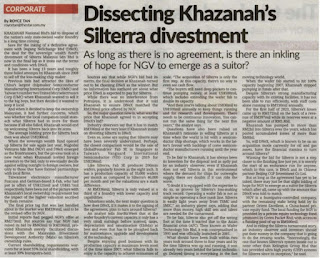 Dissecting Khazanah’s Silterra divestment
By ROYCE TAN
Saturday, 20 Feb 2021
KHAZANAH Nasional Bhd’s bid to dispose of the nation’s only state-owned wafer foundry is a long time coming.
Save for the inking of a definitive agreement with Dagang Nexchange Bhd  (DNeX), the deal for the sovereign wealth fund’s divestment of Silterra Malaysia Sdn Bhd is now in the final lap as it irons out the terms and conditions with DNeX.
It has been a long 13 years and roughly three failed attempts by Khazanah since 2008 to sell off the loss-making chip maker.
Previous bids had attracted the likes of China’s largest chipmaker Semiconductor Manufacturing International Corp (SMIC) and Taiwan’s number two United Microelectronics Corp (UMC) when Khazanah wanted to sell it to the big boys, but then decided it wanted to keep it local.
And when it decided to keep the ownership Malaysian, it had further concerns, which was whether the local companies could stomach what Silterra had in store for them because if all else failed, Khazanah would end up welcoming Silterra back into its arms.
The average bidding price for Silterra back then was about US$200mil.
When the sovereign wealth fund opened up Silterra for sale again last year, Nuglobal Ventures Sdn Bhd (NGV) and DNeX emerged as the frontrunners, but the process took on a new twist when Khazanah invited foreign investors to the bid, only to eventually decide against selling outright to foreign owners, but only to those that have formed partnerships with local firms.
Taiwanese electronics manufacturer Foxconn and German-based X-Fab, who had put in offers of US$125mil and US$85.7mil respectively, have been out of the picture with Khazanah’s local ownership requirement but the impact of the higher valuation ascribed by them remains.
The final price tag that was last bandied about in the market was RM336mil, said to be the revised offer by NGV.
Initial reports had pegged NGV’s offer at RM273mil. But sources say that NGV had raised its bid by RM63mil to RM336mil, provided Khazanah merely facilitated discussions with the Malaysian Investment Development Authority (Mida) on Silterra’s ownership rules.
Current shareholding requirements warrants for at least 55% local shareholding, with at least 30% bumiputra-held.
Sources say that while NGV’s bid had its merits, the final decision at Khazanah turned out to be choosing DNeX as the winner. But no information has surfaced yet about what price DNeX is expected to pay for Silterra.
While there was no interference from Putrajaya, it is understood that it told Khazanah to ensure DNeX matched the RM336mil price offered by NGV.
So, the major question now is, what was the price that Khazanah agreed to in accepting DNeX’s bid?

Industry observers say that it has to match RM336mil at the very least if Khazanah insists on divesting Silterra to DNeX.

Even so, some are saying that Silterra may have been severely undervalued. Perhaps, the closest comparison would be the sale of GlobalFoundries’ Fab 3E in Singapore to Taiwan’s Vanguard International Semiconductor (VIS) Corp in 2019 for US$236mil.
Like Silterra, Fab 3E produces 200mm wafers, popularly known as the eight inch. It has a production capacity of 35,000 wafers per month as compared to Silterra’s 46,000 per month and yet the valuations are a stark difference.
At RM336mil, Silterra is only valued at a third of a foundry with lower capacity and capabilities.

Valuations aside, the next major question is how does DNeX, if it makes it to the signing of the agreement, plan to turn around Silterra?
An analyst tells StarBizWeek that at the wafer foundry’s current capacity, it only has a very small earnings before interest, taxes, depreciation and amortisation (Ebitda) at best and even that has to be ploughed back for maintenance, upgrade and development of the technology.
Despite enjoying good business with its production capacity at maximum levels most of the time since 2007, what Silterra fails to enjoy is the capacity to achieve economies of scale. “The acquisition of Silterra is only the first step. At this capacity, there’s no way to even see cash flow.
“The buyers still need deep pockets to continue pumping money, at least US$500mil, which includes extending the wafer fab to double its capacity.
“And then you’re talking about US$30mil to US$100mil annually to keep things running and for research and development. There needs to be continuous innovation. You cannot run the same thing for the next five years, ” the analyst says.
Questions have also been raised on Khazanah’s rationale in selling Silterra at a time when the world is hit with a semiconductor chip shortage, which works in the latter’s favour with backlogs of come semiconductor manufacturers running until the year end.
To be fair to Khazanah, it has always been its intention for the disposal and as aptly put by an industry observer, even if Khazanah does not sell Silterra in this environment where the demand for chips far outweighs supply, there are doubts if it can ride the wave.
“I doubt it is equipped with the expertise to do so, as proven by Silterra’s loss-making track record. Operating a wafer fab is not as simple as operating a face mask line. Silterra is easily light years away from TSMC and SMIC, ” an industry player says, adding that more than money, high skill sets and talent are needed for the turnaround.
To be fair, Silterra also got off the wrong foot at the time it started due to the Asian financial crisis (AFC). Then known as Wafer Technology Sdn Bhd, it was conceptualised in 1995 and was officially launched in 2001.
What should have been built within two years took around three to four years and by the time Silterra was up and running, it was already two years behind the latest technology. Delayed timing is everything in the fast moving technology world.
When the wafer fab started to hit 100% capacity beginning 2007, Khazanah stopped pumping in funds after that.
Despite Silterra’s strong manufacturing capacity with its existing facilities, it has not been able to run efficiently, with staff costs alone running to RM130mil annually.
For the first half of 2020, Silterra’s losses came up to RM172mil on the back of a revenue of RM397mil while its reserves were at a negative amount of RM1.8bil.
Khazanah has pumped in more than RM2bil into Silterra over the years, which has posted accumulated losses of more than RM8bil.
So, will DNeX, which is known to be on an acquisition mode currently for oil and gas assets, have the financial stamina to turn around Silterra?
Winning the bid for Silterra is not a step closer to the finishing line just yet, it is merely the start of an endurance run for anyone, which in this case, is DNeX and its Chinese partner Beijing CGP Investment Co Ltd.
But as long as the agreement has yet to be inked, there may just be that slight inkling of hope for NGV to emerge as a suitor for Silterra which after all, came up with the amount that DNeX was told to match.
NGV is a bumiputra-controlled company, with the remaining stake being held by its partner Orient Excellent, a China-based private equity fund. The local funding for NGV is provided by a private equity technology fund promoted by Green Packet Bhd , with access to a funding pool of up to RM500mil.
And in riding the Silterra turnaround story, an industry observer said investors should put their money in the company that is going to do the revamp works. “Interestingly, the one that knows Silterra’s system inside out is none other than Kelington Group Bhd  that has provided ultra high purity (UHP) systems for Silterra since its inception, ” he said.

Dude, it requires more than packaging to win bid. There is deliverability and track record to do turnaround whch DNex has.
Innovativeness and ability to package companies to then flip it to the stock market will not serve to develop the industry.
DNex has changed subsidiary name to cater for Silterra. Sales and Purchase Agreement between Khazanah and DNeX is being worked out as planned.
Forget it dude. Nothing the leak from their mole inside Khazanah could do. Khazanah would be a world pariah to reverse their decision again and call for other new parties.
Unless someone powerful such as Agong or his adinda kekanda, Green Packet cannot be so gung ho.
Royce Tan's mention of NGV reminded of NGV Tech, in which Agong was implicated recently. It gave the idea for the title.
at 3/05/2021 09:35:00 AM