No to Civil and Liberal Hipocrasy in All Blogs!

Agree to disagree and cherish the differences. It's not about winning argument but benefitting from the diversity. 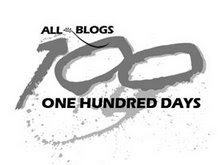 The afternoon before last night's All Blog 100 Day, I posted a comment on Big Dog's posting, Blogging Decorum to express my disgust at some disturbing hipocrasy usurping into Blogger groups. It is republished here, including other comments expressing similar disgust.

Frankly, I am not happy with some trend of late with some bloggers and the blogging community. There is this increasing intolerance for differences in opinion. There seemed to be an attempt by a certain group of people to hijack All Blog to dominate, steer its agenda and impose their will.

This is clearly against the spirit in the establsihment of All Blog, which is to promote blogging and extend that idea to develop an open society with free flowing exchange of views. Blogging has remained free from any curtailment but events by All Blog or BUM or at All Blog clubhouse is beginning not to reflect that.

Similarly, last night's event was PR partisan dominated if not for the presence of BN MP from Jerlun, Dato Mukhriz and former MP from Parit Sulong, Blogger Dato Ron. The way the event was moving, it was a blatant disregard for the diversity for the audience. 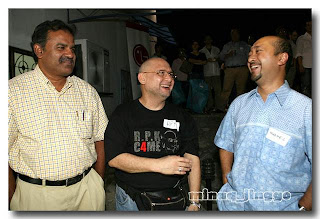 Left to right: Syed Akbar (charged for sedition together with RPK recently),
Raja Petra (now Statutory Declaration fame) and Dato Mukhriz (KJ's contender)
It was beginning to be speechy and rhetorical, till Raja Petra (RPK) reminded the crowd that the party is not about speeches but to enjoy, acknowledge each other and build up camarederie, irrespective of ones political or ideological persuasion.

Blogs have been around for few years but it picked up prominence and credibility when VSS-ed journalists got involved. After the General Election, politicans joined the fray. Statesman Dr Mahathir is now a blogger.

Blogs gained public attention following the lawsuit by the "gang of terminators" from NST on Jeff Ooi and Rocky. That became a unifying factor for Bloggers of various profile, belief and persuasion for the single minded pursuit for "freedom of speech".

This coincide with Dr Mahathir's incessant criticism of Abdullah Badawi's leadership. Bloggers was energise by Tun and vent their complain on the decaying state of the nation under the present leadership. It later build up further into various struggle of partisan, activist, religous, and ethnic nature. Not to be left out are the struggle of the common people in their daily ordeal.

All this culminated into a major slap in the face on Abdullah's Government in the last General Election. Bloggers were given acknowledgement and in reaction, blogs mushroomed.

Slowly, Bloggers are no longer disseminators of news, views and info but have turned into news themselves. Before this, news on Bloggers is about police reports on some bloggers posting. Today, Raja Petra Kamaruddin's sedition charges and Statutory Declaration have made himself a major news.

After the General Election, Bloggers got excited with the impact they made on the political senario. A whole list of bloggers unexpectedly became YBs. Somehow it has gotten into their head.

There is trend by certain group of Bloggers to deviate from All Blog's intention to promote blogging and civil discussion amongst it's members. It is acknowledged that Bloggers are generally anti establishment - critical of the established norm and present leadership. But, the disturbing trend is that it is slanting towards a certain liberal idea and it is more imposing.

Discussion events have in the past been lined up with people of similar line of thinking with some token differing views. Though inappropriate, it was still tolerable. Of late, there is not even the token ones at all. When raised, excuses were given, rather than serious attempt to address the shortcoming.

In one occasion last year at the clubhouse, there was a blatant attempt by an emcee claimed to be a civil right activists curtailing the voice and presence of those with differing views.

I respect the right of people to undertake initiatives for whatever cause they believed in, even if I do not believe in and the cause is one I oppose to. However, it is unacceptable to impose and dominate the agenda of an organisation that was created to promote free flowing discussion.

All Blog should not be a party and to allow its premise to be used by any groupings with such an attitude. It supposed to be an organisation that seek to enhance the understanding of its members and associates on various issues pervading society. By that, society benefits by having bloggers expressing their views with a more comprehensive worldview and acknowledge the various facet of an issue.

The Other Side of Liberalism

My disgust expressed in Big Dog's blog below:

Thats why I have of late been rather reluctant to socialise on frequent basis with some people who are inconsistent in their understanding and practise of “right to free speech” and “freedom of information”.

For one, familiarity will invite friction. Then, there are few characters who are nice at one moment and could turn into an irrational, obnoxious, loud and opinionated Jeckyll.

In the early days of blogging and before the general election, I thought this people are really open, liberal and believers in the maxim “agree to disagree”. I hope I can continue to engage them and exchange views in a gentlemen and civil manner.

Over time, some turn out to impose and demand we conform to their logic, even how stupid or incomplete or bias it turn out to be. Differences are met in bad taste.

After election, this attitude got worsen. They just tasted victory and some bit of “power” and yet they are showing such arrogance and increasigly defiant. The Malay colloquial described it as “besar kepala” and “bagi betis hendak peha”.

The differences in the stand of a debate depends on the relevance of the context, philosophical/ideological basis, moral basis, interest and its emphasis/assessment of critical factors.

In my view, the effectiveness of an argument lies in its ability to accommodate and take into account all the fact and various sides to an issue. Even that can’t be the truth.

I have pretty much resign to the fact that whatever bullshit - these so-called liberal, human rights, civil rights, and whatever rights - they seek are just cover and justification to impose or more polite, sell their brand of socio-political agenda.

They do not seriously help and contribute to an effective nation building. For one, their view are templates from other places, cultures, history, values, and moral standards. Two, the hidden agenda is economic opportunism.

For a complex and diverse country like Malaysia, we must view nation building from within ourself, our situation, and develop our own unique formula. Pragmatism should prevail, rather than satisfying the hallucinating wet dreams of these bunch of dreamers!!!!!!

Heck some are even academically mediocre.

Perayau questioned their claim ownership to the Civil Society brand. His stated view as below:

Anak Jawa raised the insensitivity of such group of people through their expressed views and actions. He wrote:

So lets not deviate from real issue facing the nation and refocus back to what we set out to do. Rid the country of the root cause of our present dissatisfaction. Thats Abdullah Badawi!
at 7/06/2008 08:42:00 AM

Fuh..! At last...something that can make me breath deeply and think logically again...

Go and stand in front of a mirror ,recite what you have wrote!bigot

Just to clear the air:

We did invite many other BN MPs. Over and over and over again. Either no response or they had other commitments.

Can't blame All Blogs if our guests can't make it. :)

Plus, it was a fund raising event where the pull was that you can get to know your MPs.

No political agenda whatsoever. Seriously, none. It was mainly to raise funds for a major event we're planning.

I did the invites for this one. Next time you help out do the invites? Can?

Unfortunately, despite what Pet says, his action indicates that he wants to keep AAB, as basically it's easier to make way for PR to be in government with AABD holding the helm rather than the others.

Voice, you are totally wrong. Yati (KLConfidential) said it truthfully. She was chairman org. committee. We made sure there was no discrimnation. If there was as you hinted, Mukriz would not have been there.
You are the last person I expected to volunteer such a remark....PR dominated event. This event was initiated by Gobloking with a 5k cheque to raise funds for All Blogs. You should know that rental has to be paid monthly, utility bills etc. Rocky and Ena has been carrying this burden silently and Gobloking thaought that this was unfair, thus her magnanimous contribution. It was a get together and fun but you read otherwise into the even. Sad, my friend.

I sure hope you do not fall into those that have a habit of interpretating an article they way they like it to be and not what it is written as.

I wrote below to conclude my passing remark on the event:

It was beginning to be speechy and rhetorical, till Raja Petra (RPK) reminded the crowd that the party is not about speeches but to enjoy, acknowledge each other and build up camarederie, irrespective of ones political or ideological persuasion.

I am quite aware the event is a fund raising event and the financial assistance provided by friends.

I can rebut at length Zorro's comment but it will deviate from the point I was trying to express.

The point of this compilation of views in thsi posting is about hypocrasy.

Live what we utter to the letter and spirit and not by mere convenience.